While states saw their legislative sessions disrupted and many state ethics officials worked remotely in 2020 due to the COVID-19 outbreak, there were some important changes made to lobbying and campaign finance laws and regulations. Several bills that might have passed in a normal year lay stagnant as lawmakers tended to the pandemic and several states introduced changes that will be sure to have an impact on lobbying and campaign finance. Some of these changes include instituting waiting periods before former public officials can register as lobbyists, new provisions for grassroots lobbying, e-filing and waived late filing fees, requiring banks to disclose campaign account data, and disclaimers for election communications spread with bots. 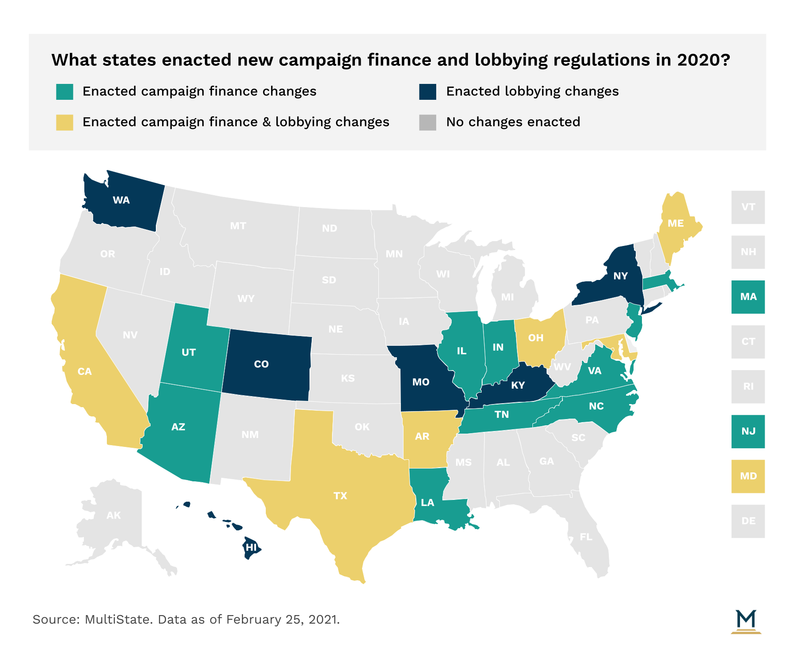 State lawmakers and regulators were able to enact some very impactful changes despite disrupted and shortened sessions. In New York, the Joint Commission on Public Ethics (JCOPE) enacted new regulations related to grassroots lobbying. These new regulations impact individuals and organizations who attempt to influence the public to deliver a message to public officials through various means of communications including social media, rallies, and advertisements. These new regulations also contain various reporting provisions for lobbyists who assist in grassroots lobbying, organizations engaged in grassroots lobbying, and for grassroots lobbying that is conducted through social media campaigns. Due to numerous changes to reporting requirements as well as internal changes JCOPE is making to its online filing system, the deadline for January-February 2021 reports has been extended to March 22, 2021.

In 2021, legislators are busy making up for lost time. So far, they’ve introduced more than 50 lobbying bills ranging from changing definitions, updating the contents of lobbying reports, and making changes to what will trigger registration requirements.

Maryland made it easier for state legislators to communicate with constituents by permitting their campaigns to fund “unofficial legislative newsletters” and eliminating the prior system’s reporting obligation. New Jersey officeholders and candidates may now pay their child care expenses with campaign funds. And in Louisiana, officeholders may use campaign funds to repay their personal loans to their campaigns, but only after they have left office for at least one year. Louisiana campaigns face new rules for raffle ticket contributions, but no longer need to collect ticket buyers’ social security numbers.

Massachusetts and Maryland blazed new trails in public disclosure. Building on Massachusetts’ 2019 legislative action, banks began filing monthly “depository system” reports in 2020 on the next tranche of campaigns, nearly 500 state legislative candidates and 100 candidates for mayor of smaller cities in the commonwealth. This first-in-the-nation third-party reporting system requires banks to disclose their campaign customers’ itemized expenditures and a summary of their receipts to verify the respective campaigns’ filings. In Maryland, people who use “bots” – automated online accounts that post material without a human’s involvement – to distribute content that seeks to influence any Maryland campaign must include a disclaimer to announce the bot’s involvement in distributing the materials. The Maryland State Board of Elections may seek to remove un-disclaimed bots, but this new law imposes no duty on ISPs or online platforms.

We have omitted some less exciting legislative and regulatory changes made last year by Virginia, Maryland, and Utah. Following the 2020 elections, we expect many state legislatures and campaign finance agencies to enact more sweeping changes to election and campaign finance law in the months ahead. Please feel free to reach out to the MultiState or Kelley Drye teams if you would like to learn more.