In March, U.S. gasoline prices hit their all-time highest peak at $4.33 per gallon, surpassing the previous record set in 2008. Inflation, increased demand from motorists traveling to work and vacation as COVID-19 subsides and concerns over Russia’s invasion of Ukraine and its impact on energy markets have caused gas prices to surge. Rising costs have caused motorists to change their habits or absorb the escalating costs, eating into household budgets.

The Biden Administration has responded to these rising prices by releasing 1 million barrels of oil from the country’s strategic reserve and suspending the summer ban on ethanol-blended gasoline. But President Biden has not yet indicated support for a suspension of the 24.4 cents-per-gallon federal gas tax advocated by members of Congress.

Several states have begun offering their own “gas tax holidays” this summer, where gas purchased during a certain period of time will be exempted from state gas taxes, or taxed at a lower rate. So far, four states — Connecticut, Georgia, Maryland, and New York — have enacted measures to suspend or lower the state gas tax this summer, and lawmakers in 22 states have introduced legislation to do the same. 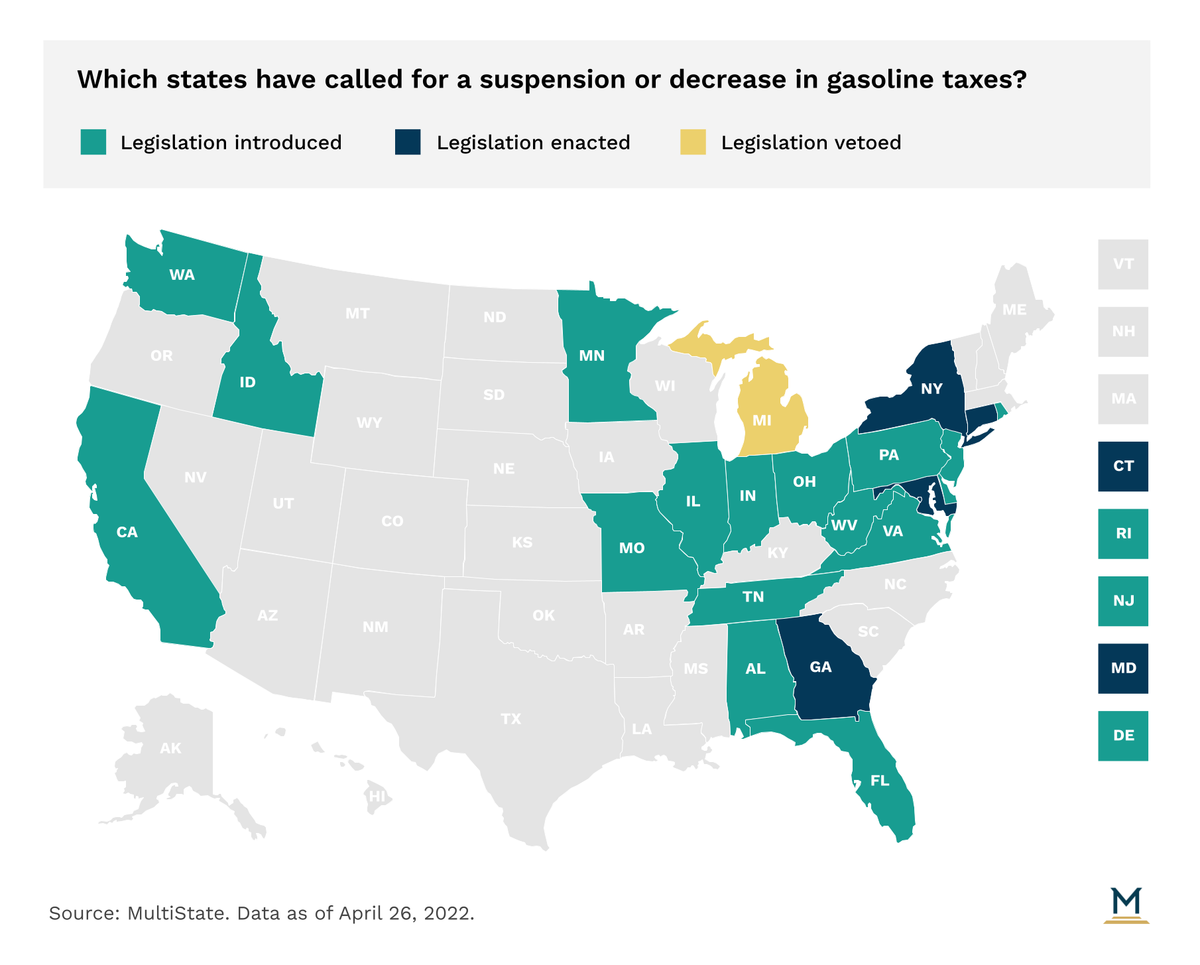 In Connecticut, it took just three days for legislators to fast-track a bill (CT HB 5501) to suspend the 25 cents-per-gallon state gas tax from April 1 to June 30, 2022. The bill also suspends fares on public buses during that time period and gave shoppers a one-week sales tax holiday on clothing and footwear under $100 in April. New York Governor Kathy Hochul (D) included a provision in the enacted budget bill (NY SB 8009C) that suspends 16 cents of the 33 cents per gallon gas tax from June 1 until the end of 2022.

Back in March, Georgia Governor Brian Kemp (R) signed a bill (GA HB 304) into law that suspends the state gas tax of 29.1 cents per gallon from March 18 until May 31, 2022. Signed that same week, Maryland’s law (MD SB 1010) suspended the state gas tax for just one month. The 36 cents per gallon tax was reinstated on April 18, 2022, after Maryland lawmakers ended their session without extending the tax break.

The Michigan Legislature also passed legislation (MI HB 5570) to suspend the gas tax, but Governor Gretchen Whitmer (D) vetoed the measure. She called the proposal to suspend the 27 cents-per-gallon tax for six months a “misguided proposal” that  “does nothing for Michiganders facing pain at the pump right now.” Whitmer has instead proposed exempting gasoline from the 6 percent sales tax, a measure that would save drivers 24 cents on a $4 gallon of gas.

California lawmakers have also advocated a different approach — direct payments to taxpayers. California has the highest gas prices in the country, and Governor Gavin Newsom (D) has called for a $400 gas tax refund to be given away in debit cards. Some Democrats want to exclude high-income vehicle owners, an idea Newsom is open to, while a Republican bill would simply suspend the gas tax for six months.

Suspending the gas tax is not without costs. Gas tax revenues are used to support transportation funding, and a suspension in taxes could blow a hole through infrastructure budgets. The one-month Maryland gas tax holiday will cost the state an estimated $100 million, with money from the Transportation Trust Fund used to make up the shortfall. The Michigan bill would have cost the state around $750 million while saving drivers an estimated average of $75 per person this summer.

The gas tax holidays have also caused some confusion for retailers who have already paid the state tax for fuel sitting in their tanks but are being accused of price-gouging for failing to reduce prices. And it has angered climate activists who see the rising prices as an opportunity to wean drivers off fossil fuels and onto more renewable sources of energy.

Notably, gas prices have fallen in the last few weeks, reducing the need for a gas tax suspensions. On the other hand, the oil market continues to be highly volatile, and it’s not clear when another surge in prices may hit as travel picks up and demand increases this summer.