In the wake of the 2020 presidential election, the New York Times reported that WinRed, the fundraising arm of the Republican Party, was using a pre-checked box on donation forms to commit donors to recurring contributions. Many donors did not realize that they were signing up for a recurring donation, according to media reports at the time and campaign finance reports for the former President’s and Republican National Committee’s campaign accounts in which $13 million was refunded to contributors. In total, the Trump campaign ended up refunding $122 million, or 11 percent of its gross online receipts. This wasn’t just a Republican issue in 2020. Democrats were guilty of using pre-checked recurring contribution boxes on ActBlue as well; however, the Biden campaign only refunded about 2% of online receipts. In tech speak, the methods WinRed and ActBlue used are known as “dark patterns” which get donors to do something they may not have intended to do, such as setting up a recurring contribution to a political campaign.

It was in this context that Delegate Julie Palakovich Carr (D) introduced HB 17 in the Maryland House of Delegates to prohibit Maryland-regulated campaigns from using pre-checked recurring political donation boxes and strengthening transparency around recurring political contributions. And in Tennessee, Lieutenant Governor Randy McNally (R) and Speaker of the House Cameron Sexton (R) introduced SB 1005/HB 1201. The broad construction of the Maryland law means it will likely impact corporate and labor PACs using payroll deductions.

Maryland’s current campaign finance law requires PAC treasurers to provide receipts to contributors who make “one or more contributions in the cumulative amount of $51 or more” and/or at the “request of a contributor”. The state’s free reporting software, MCRIS, can issue such “$51 receipts.” Payroll deductions for voluntarily participating employees are permitted in the state unless the contributions are solicited by actual or threatened physical force, job discrimination, or financial reprisal or as a result of a commercial transaction or dues, fees, or other assessment required as a condition of membership in a labor organization or employment.

Tennessee law, prior to passage of SB 1005, did not specifically address recurring contributions for political action committees. In terms of payroll deductions, the Tennessee Department of Labor has stated that employers may not make deductions from an employee’s paycheck without a signed written agreement.

HB 17 changes Maryland law in several ways, most notably  by adding a requirement that a committee receive affirmative consent from a contributor before accepting a recurring contribution and that the “passive action of a contributor or donor, including failing to uncheck a pre-checked box authorizing a recurring contribution or donation” does not meet the requirement for affirmative consent.

SB 1005 changes Tennessee’s current campaign finance law in many ways but we’ll focus on the new section that prohibits PACs (which include corporations spending more than $1,000 in an election cycle) and candidates from using “pre-checked or pre-marked boxes in a solicitation authorizing or requiring continuing future contributions to that candidate or committee from the credit card or another form of payment provided by the person from whom a contribution is requested.” The new section goes on to require that a recurring contribution must “be accepted and acknowledged in writing by the potential contributor in clear and precise language evidencing the intent of the contributor to authorize a continuing contribution.”

The Maryland law is written in a way that the definitions triggering the requirements target vendors for political committees (e.g., ActBlue, WinRed) but also appear to cover employers or labor unions raising PAC contributions via payroll deduction. Corporations and labor unions with PACs registered in Maryland for the support of state and local candidates should be prepared to re-evaluate their solicitation strategy to include an affirmative (and recordable) opt-in process for employees and members contributing to the PAC and the distribution of receipts with the required information for each payroll deduction received after January 1, 2023.

While the new law clearly specifies what must go into the new payroll deduction receipts, the actual language it used presents two questions. First, the law requires the person soliciting the contribution provide a receipt “for each contribution.” Logically, one would expect the PAC to issue a receipt to each new payroll deduction participant at, or soon after, they sign up. But the statute says after “each contribution,” not “following affirmative consent,” which could result in requiring employers to issue receipts to every donor after every pay period. Second, the statute provides no time period for issuing the receipt. Should receipts be issued the same day, within X hours or Y days? In the absence of clarity on this point, employers, unions, and vendors should be prepared to issue the receipt when a new PAC donor signs up. The three data points each receipt must report are not unique to any one donor, meaning the receipt may be a generic form run-off a copier or sent via email without customizing it to the donor’s identity, employer, PAC supported, or contribution amount. The State Board is reviewing these open questions and is expected to issue guidance before this law becomes effective in January 2023.

Corporations and labor unions with PACs registered in Tennessee for the support of state and local candidates are unlikely to see much change. However, if the PAC’s written authorizations for PAC payroll deductions does not include “clear and precise language evidencing the intent of the contributor to authorize a continuing contribution,” the PAC should include that “clear and precise language” immediately and save a copy of each authorization in the PAC’s document retention file.

It is worth noting that this movement to ban dark patterns in online political giving is not unique to Maryland and Tennessee. Indeed, U.S. Senate Democrats Amy Klobuchar (MN) and Dick Durbin (IL) introduced the RECUR Act (S. 1786 and a companion HR 6350), to ban the practice in federal elections and a number of other states have begun investigating the practice or introduced legislation to ban the practice. These states can be seen in the map below. 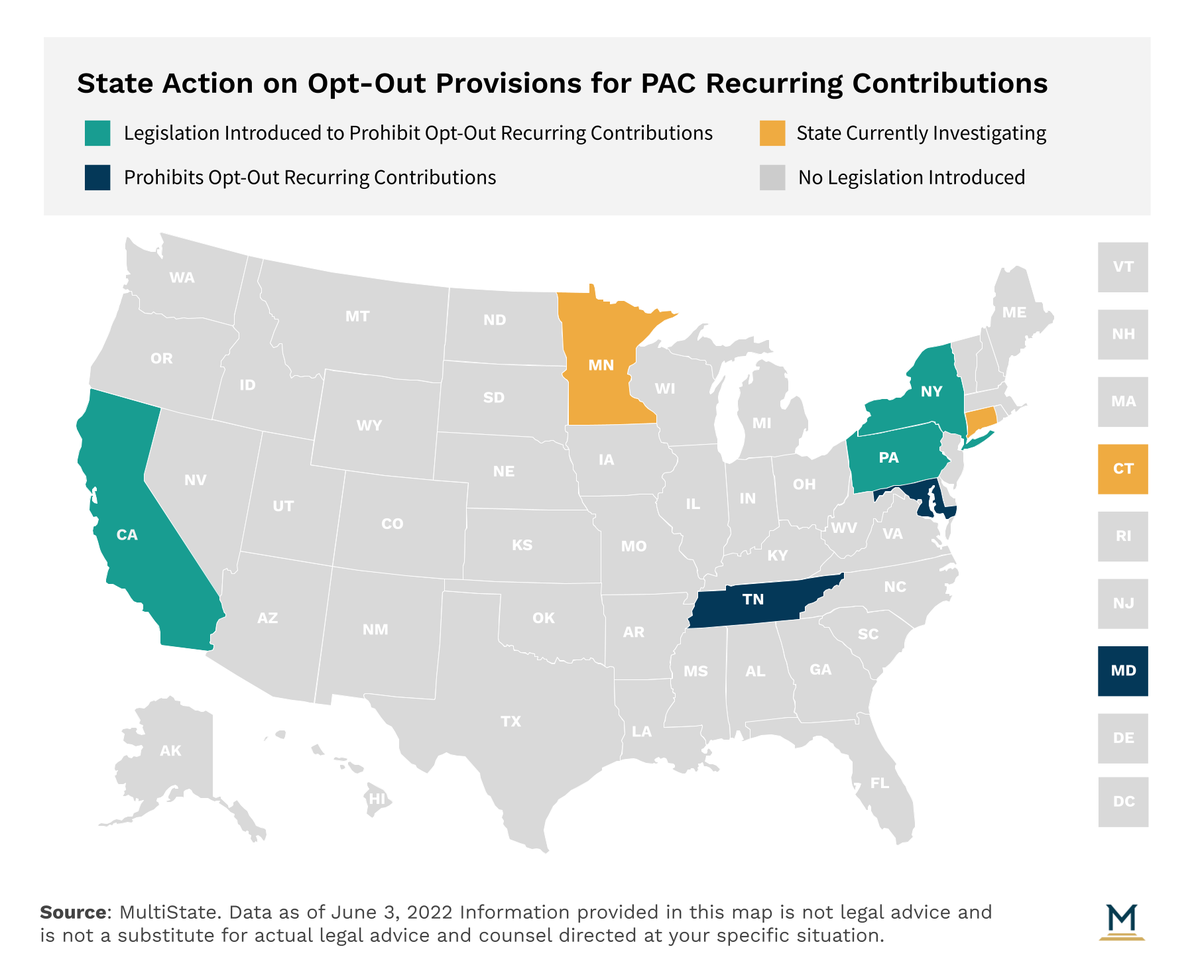 As of May 7, 2022, the NRCC and DCCC, users of WinRed and ActBlue respectively, have removed the pre-checked recurring contributions so now donors must affirmatively opt-in to a recurring contribution. ActBlue has stated that this is a new policy for the platform and requires candidates to be approved to use the feature. WinRed has not stated whether this is a policy change or if campaigns are making the decision to avoid negative publicity and contributor blow-back.

With ever changing state political giving and compliance law changes, make sure your organization is not caught unaware — reach out to our team with questions.