Home
/
Insider
/
•••
Share
Despite issuing an executive order in January calling for the construction of a wall along the U.S.-Mexico border, the Trump Administration was unable to get the necessary funds included in April’s $1.1 trillion Congressional spending bill. President Trump remains committed to fulfilling one of his signature campaign promises. However, some state and local lawmakers are less than enthusiastic about a potential wall across our southern border. Seven bills and five local ordinances have been proposed across six states that would punish companies bidding on the border wall project by prohibiting those companies from receiving public contracts.

The map below displays which states and localities are considering legislation targeting border wall contractors. 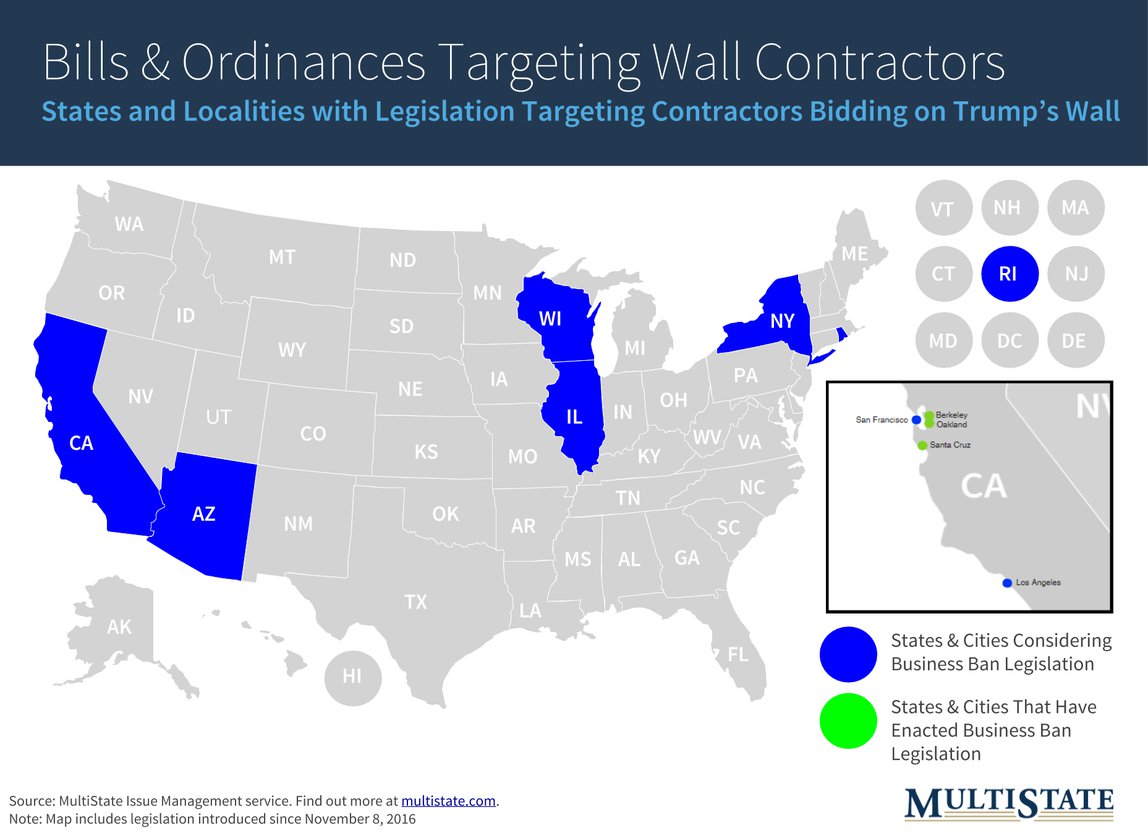 Leading the charge is California, where two state-level bills have been joined by ordinances from at least five local jurisdictions. Receiving the most media attention at the state level is a bill (CA SB 30) that would prohibit California from awarding or renewing any contract with anyone providing goods or services to the federal government for the construction of a federally funded wall along the state's southern border.

The bill’s author, Senator Ricardo Lara (D-Los Angeles), argued in an April op-ed that his bill would protect California’s economy, environment, and unique bi-national culture from the damage he believes the wall would cause. “A massive wall along California’s southern border reveals another dividing line — between the American Dream of a better future for all who come here and a nightmare of exclusion and untold economic and environmental destruction.” He bluntly explained his thinking in an April interview: “If you're a business that wants to do work with Trump's proposed wall, then quite frankly, California doesn't want to do business with you.” Senator Lara's bill awaits its final vote in the Senate.

Meanwhile, California Assemblymember Phil Ting (D-San Francisco) has introduced a bill (CA AB 946) that would prohibit the boards of the California Public Employees’ Retirement System (CalPERS) and the State Teachers’ Retirement System (CalTERS) from making new investments or renewing existing investments in any border wall construction company. The bill would also require the boards to liquidate investments in a border wall construction company within the next 12 months. So far, Assemblymember Ting's bill has yet to pass out of the Committee for Public Employees, Retirement, and Social Security.

Echoing the actions in the state legislature, multiple California cities have introduced “business ban” ordinances of their own. San Francisco introduced an ordinance (#170295) that would prohibit the city government from “contracting with companies who bid on contracts or contract with the Federal Government to provide services or goods to construct the border wall referenced in Executive Order No. 13767.”

Notably, these aggressive moves from state and local politicians could prove costly or ultimately ruled unconstitutional.

The table below outlines details of each of the “business ban” bills and includes a brief summary.