Since 1824, when the popular vote was recorded in a U.S. presidential election for the first time, five candidates have won the presidency without receiving the majority of the votes cast in the country. In recent memory, President Donald Trump (2016) and President George W. Bush (2000) were both elected without winning the popular vote, but this also occurred in 1888 (Benjamin Harrison), 1876 (Rutherford B. Hayes), and 1824 (John Quincy Adams).

In the aftermath of the 2000 election, activists looking to disrupt the electoral college system and bypass the cumbersome constitutional amendment process have settled on a controversial interstate compact approach. This initiative gained further support following the 2016 election.

The National Popular Vote Interstate Compact is an agreement between ratifying states to award their electoral votes to the winner of the nationwide popular vote in each presidential election. The agreement would enter into effect once enough states joined the compact to represent the 270 electoral votes needed to win the presidency.

Earlier this month, Oregon Governor Kate Brown (D) signed legislation (OR SB 870) to become the fifteenth state (plus D.C.) to pledge its support to the NPVIC. That brings the compact’s electoral vote count up to 196 (still less than 75 percent of the way to its goal). Oregon became the fourth state — alongside Colorado, Delaware, and New Mexico — to join the compact this year.

Although supporters welcomed NPVIC’s new additions this year, the compact also suffered a few notable setbacks. The Maine House of Representatives twice rejected a state senate passed measures (ME LD 816) to enter Maine into the NPVIC. Nevada Governor Steve Sisolak (D) vetoed a bill (NV AB 186) that would have entered his state into the compact, citing the compact’s potential to diminish the role of small states like Nevada in presidential elections. 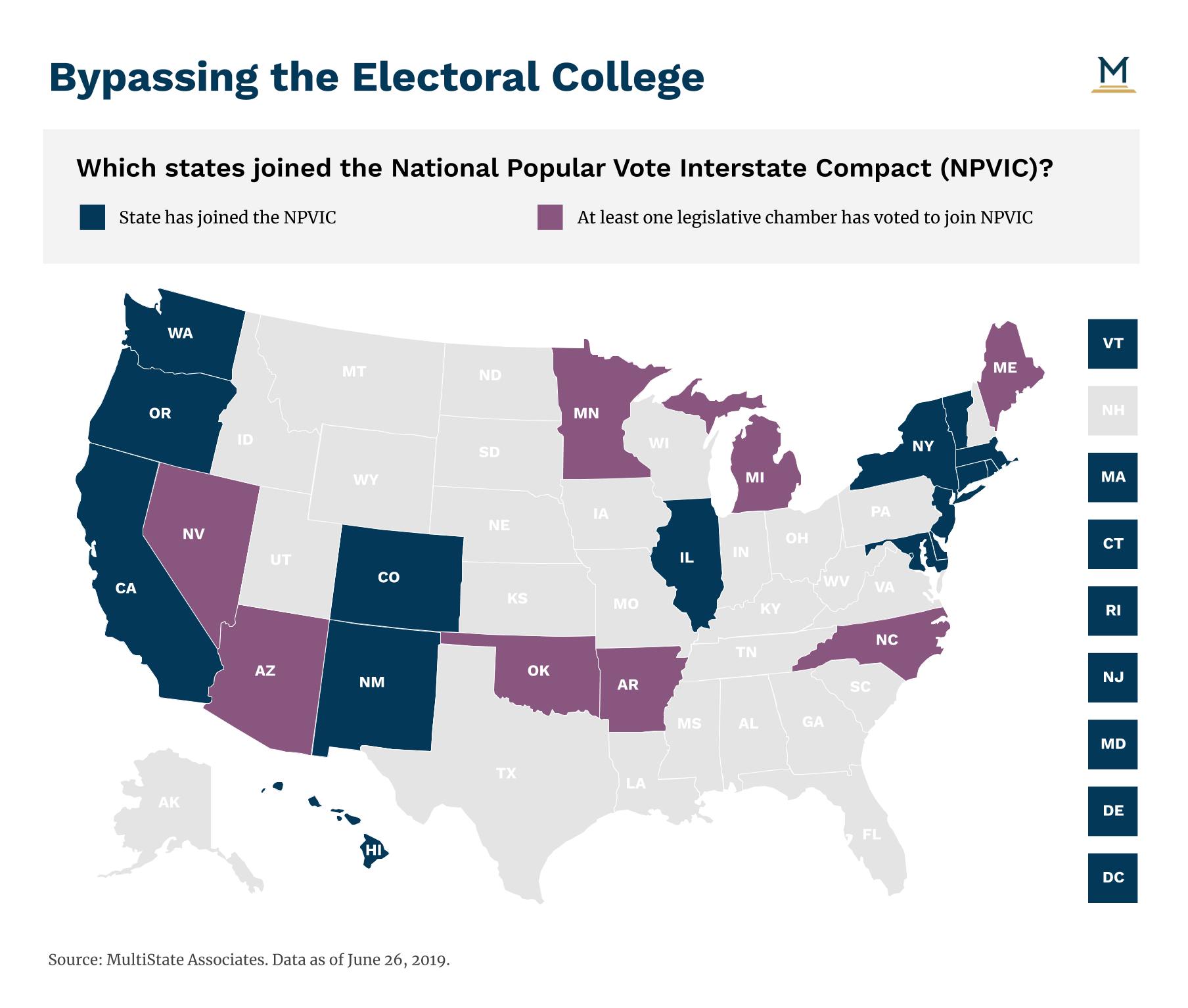 The NPVIC, originally drafted in 2006, is ultimately an end run around the Electoral College, a body established in Article II, Section 1 of the U.S. Constitution that selects the president about a month after a popular election is held in November. Forty-eight states choose their electors based on their state popular vote count, while two — Maine and Nebraska — award two of their votes based on the state popular vote and the remaining votes based on the majority vote in each congressional district. Given the steep differences in voter turnout between the states (ranging from about 75 percent in Minnesota to 43 percent in Hawaii in 2016), this system can result in a candidate winning the popular vote nationwide (due to high turnout in safe states) but losing the vote by a slim margin in a few swing states.

The task of amending the Constitution to replace the Electoral College is a difficult and complicated process: it would require two-thirds of members of Congress or a convention of two-thirds of the states to first introduce an amendment, and then for three-fourths of state legislatures or ratifying conventions to approve the amendment. However, NPVIC supporters argue that, based on the states’ broad powers to establish the process by which electors are chosen in Article II, Section 1 and the relevant case law for interstate compacts, an amendment is not necessary to bypass the Electoral College.

The NPVIC’s opponents argue that the compact rests on questionable legal grounds. According to Article I, Section 10, clause 3 of the Constitution, “No State shall, without the consent of Congress . . . enter into any Agreement of Compact with another State. . . .” In Virginia v. Tennessee (1893), the U.S. Supreme Court found that this prohibition more specifically applies to any agreement “tending to the increase of political power in the states, which may encroach upon or interfere with the just supremacy of the United States.” Because such a compact would effectively nullify the U.S. House of Representatives’ ability to resolve presidential electoral ties, NPVIC opponents argue the agreement encroaches on the federal government’s supremacy and empowers the states. The compact’s opponents further argue that the NPVIC may run afoul of federal statutes like the Voting Rights Act and incentivizes states to expand their electorates — and thus their importance in the election — by taking extraordinary measures like extending the franchise to children and people who are incarcerated.

NPVIC supporters argue that the compact is constitutional based on recent case law, such as U.S. Steel v. Multistate Tax Commission (1978), in which the Court found that an interstate compact creating tax uniformity did not require congressional assent because the member states were simply collectively exercising a power that each state already individually possessed. NPVIC proponents point further to cases like McPherson v. Blacker (1892), in which the Court determined states have “plenary” and “exclusive” power over the selection of electors, as evidence of the state legislatures’ absolute power to award electors as they desire. In the past, states delegated the power to award electors to governors, gubernatorial cabinets, or one or both of the state legislative chambers, so NPVIC proponents argue that the compact is a natural and legal extension of this power.

Before courts can consider the compact’s constitutionality, NPVIC proponents have an uphill battle to gain the remaining 74 electoral college votes needed to initiate it. Because the last two presidential victors who lost the national popular vote were Republicans, states that have joined the compact have been mostly controlled by Democrats. While most blue states are already members of the compact, NPVIC proponents will have a greater difficulty convincing Republican state lawmakers in purple or red states to join the cause.