The theme for state races in the 2020 elections so far is that Republicans have held, if not expanded, their lead in state governments (both governors and legislatures). Democrats had very high expectations going into the elections, but the gubernatorial map was never great for them and they underperformed in state legislative races in states they hoped to flip control away from Republicans.

There were no big surprises in the races for governor this year. With only 11 gubernatorial elections in 2020, forecasters pinned nine of the races as safe for the incumbent party with only one close race forecasted in Montana to replace term-limited Democrat Steve Bullock. In that race, Republican Greg Gianforte defeated Democrat Mike Cooney to flip the Montana governor’s mansion for Republicans. Democrat Roy Cooper held on to the governor's mansion in North Carolina and Republicans Mike Parson and Jim Justice did the same in Missouri and West Virginia, respectively.

Republicans have gained one gubernatorial seat after the 2020 elections by flipping the open seat in Montana. In 2021, Republicans will have 27 governors and Democrats will have 23 governors. 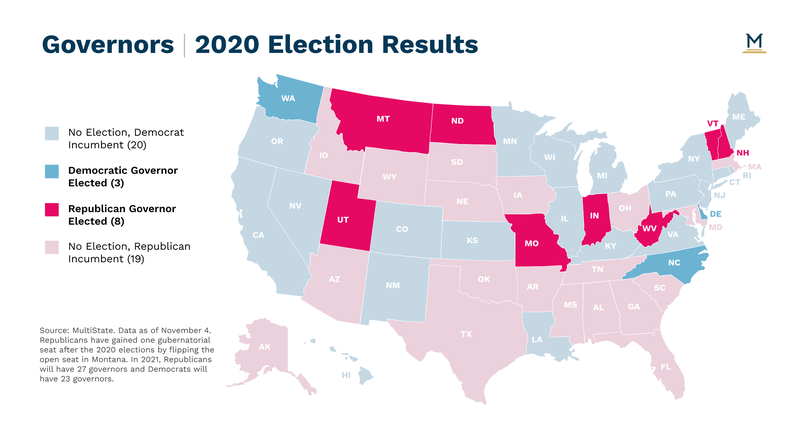 Hopes were high for Democrats in the 5,877 state legislative races in 2020. Forecasters put nine legislative chambers currently under Republican control as potentially flipping to Democratic control after the elections. However, the elections were a huge disappointment as it appears Democrats will fail to flip most of these state legislative chambers. Democrats failed to take advantage of opportunities to gain control of the Iowa House, Michigan House, Pennsylvania House, Texas House, and both the House and Senate in North Carolina. As results are still being tabulated in close races, Democrats still have a path of gaining control in the Minnesota Senate and both the House and Senate in Arizona.

Adding to the good news for Republicans, the GOP will flip control in the New Hampshire Senate from Democrats and are likely to break up the current coalition in the Alaska House, giving control of the chamber to Republicans in 2021. So a year where Democrats expected big gains in the state legislatures might net them one or no chambers and could even add to the Republican’s current lead of 59 state legislative chambers nationwide to Democrats’ 39 chambers. We’ll keep you updated as close races are called over the coming days.

When one party controls both the legislature and governor’s mansion in a state (a "trifecta"), that party has a clear path to pass preferred public policies without any major roadblocks from the opposition party. Pre-election, Republicans held trifectas in 21 states, Democrats held 15 state trifectas, and the remaining 14 states were under split control.

Democrats’ best chance of picking up a trifecta in the 2020 elections was to capture the Minnesota Senate from Republican control. But that chamber is currently too close to call.

Workers’ Rights Expanded at the Ballot

Voters in Colorado and Florida approved ballot measures to expand benefits for workers on Tuesday. Voters in Colorado approved Proposition 118 that will create a state-run program to provide 12 weeks of paid family and medical leave to employees. Colorado will become the ninth state, along with the District of Columbia, to approve such a program. In Florida, voters passed Amendment 2, which will incrementally increase the state’s minimum wage until it reaches $15 per hour in 2026.

In California, a closely-watched and controversial ballot measure addressing worker classification – Proposition 22 –  was also approved by voters. Under the measure, drivers for app-based transportation and delivery companies are exempt from current state labor mandates, like paid sick leave, and will be classified as independent contractors. However, independent contractor drivers will be entitled to other compensation such as minimum earnings, healthcare subsidies, and vehicle insurance. Proponents of the measure spent over $200 million to finance the campaign, while No On Prop 22 spent nearly $20 million attempting to defeat the measure.

The biggest, most expensive tax ballot measures of the night were a measure that would increase business property taxes in California (Prop 15) and to allow for a graduated personal property tax in Illinois (Amendment 1). While votes are still being counted in both states (though the Illinois measure is currently being projected to fail), lawmakers in both states were placing a lot of their fiscal hopes on their passage to help balance budgets. If these revenues don't materialize—and with the prospects of a federal relief package fading—the chances that lawmakers in California and Illinois will have to turn to increasingly aggressive tax policy increase significantly.