As communities continue to address the economic effects of government-mandated stay-at-home orders put in place to contain the COVID-19 pandemic, states are discussing how to spend their portion of the $150 billion of federal aid Congress allocated to states and local governments through the CARES Act. The aid program, called the Coronavirus Relief Fund (CRF), provides states, territories, tribes, and local governments funds to cover various expenses incurred due to stopping the spread of the virus.

As of May 20, the U.S. Treasury Department had disbursed $144.3 billion of Coronavirus Relief Funds. The chart below details the payment amounts distributed to states, tribes, and territorial governments. Though most federal assistance program funds have already been doled out by the Treasury, states have yet to decide how those CRF funds will be spent as state deficits could collectively reach hundreds of billions of dollars. In the chart below, an average of 45 percent state allotments are for local governments. 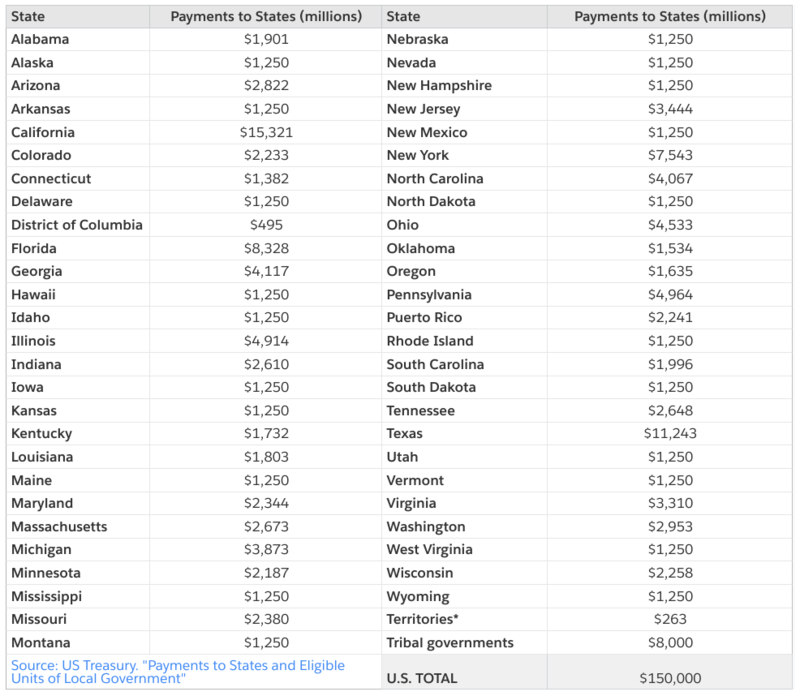 The challenge is determining who — the governor or the legislature — has the final say over the money. Many state lawmakers insist that the legislature controls budget decisions, even though the CARES Act money was directed to governors.

In Minnesota, Governor Tim Walz (D) and Republicans in the legislature are at odds over how the state should spend its share of CRF assistance. Similarly in Pennsylvania, one billion of the state’s $4.9 billion CRF money has been given to the state’s largest localities, while Governor Tom Wolf (D) and the Republican-controlled legislature still need to decide how the rest of the funds will be distributed.

In states where one political party controls both the governorship and state legislature, governors appear to be taking the lead in how CRF money is spent. In Indiana, Governor Eric Holcomb (R) appointed an “Economic Relief and Recovery Team” in April to make spending recommendations for the state’s $2.1 billion share of CRF money, while Iowa Governor Kim Reynolds (R) unveiled how the state should use its funds to get businesses and farmers backup and running.

Local governments, also named as beneficiaries in the CARES Act, are asking states to transfer their share of federal aid. Local governments with populations over 500,000 received payments directly from the federal government. In April, the U.S. Treasury Department issued guidance on eligible expenditures of the Coronavirus Relief Funds, but did not clarify how states should transfer funds to localities with less than 500,000 residents. Only 18 states have directed federal assistance to local governments with 32 states withholding funds from localities, according to data compiled by the National League of Cities. 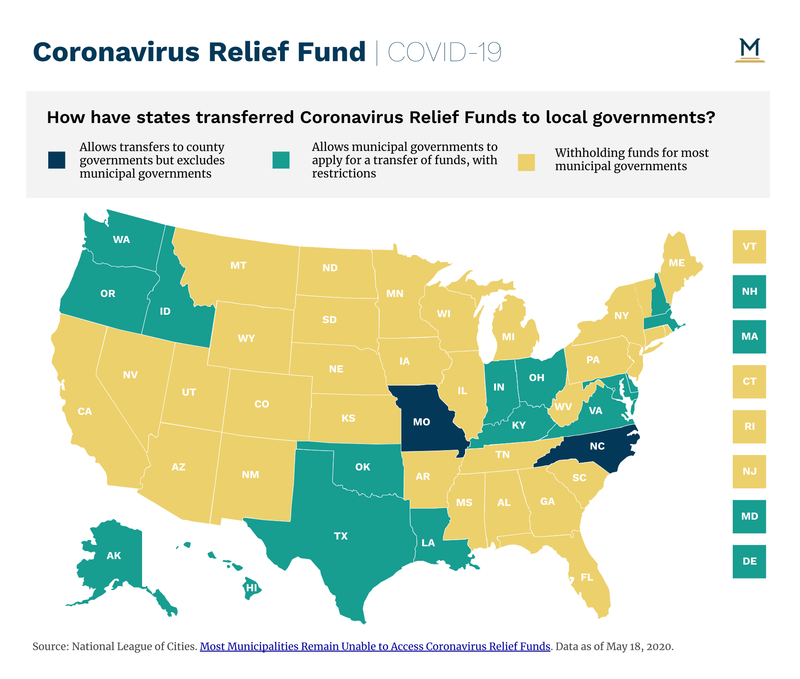 With states almost certain to face massive budget shortfalls due to the lack of tax revenue generated during the pandemic shutdown, there will be added pressure on legislatures and governors to decide how funds will be spent. And as states slowly reopen, state legislatures will likely begin discussions on what special sessions will look like and how these revenue shortfalls will be addressed.