Each state sets its own rules regarding lobbying — who can lobby, where you can lobby, and when you can lobby. It makes sense, then, that a little over half of the states have specific rules on when former government officials and legislators can register as a lobbyist. Here we’ll review some of the important points to keep in mind regarding “revolving door” restrictions.

Each state defines who is a former public official or legislator differently. As a result, each state varies in how it restricts those individuals from lobbying. In Alabama public officials are restricted from lobbying or representing clients “before the board, agency, commission, department, or legislative body, of which he or she is a former member” for two years after they leave that position. Missouri sets lobbying restrictions for “individuals who have been elected or appointed to the state Senate, to the State House of Representatives, or to the office of governor, lieutenant governor, attorney general, secretary of state, state treasurer, or state auditor.” Oregon has narrower restrictions, though, only placing limits on former members of the Oregon Legislative Assembly.

Because of the variation in definitions for who these restrictions apply to, it is important to review the specific rules written for each state prior to hiring a former public official or legislator to lobby. Some states provide more information than others, though, which can make it tricky in determining who faces these restrictions.

How Long Do The Restrictions Last?

In addition to who is impacted, states also have different time restrictions on how long former public officials are barred from lobbying. These restrictions can range from six months to two years. These time constraints may restrict individuals from any lobbying activity or the restrictions may only bar lobbying before the agency, organization, or public body for which that individual was a member.

Time constraints may be less definitive in certain states. Nevada, for example, restricts lobbying activity for former legislators based on when they leave their public office and when the next legislative session ends.

The map below illustrates which states have revolving door restrictions and their durations. 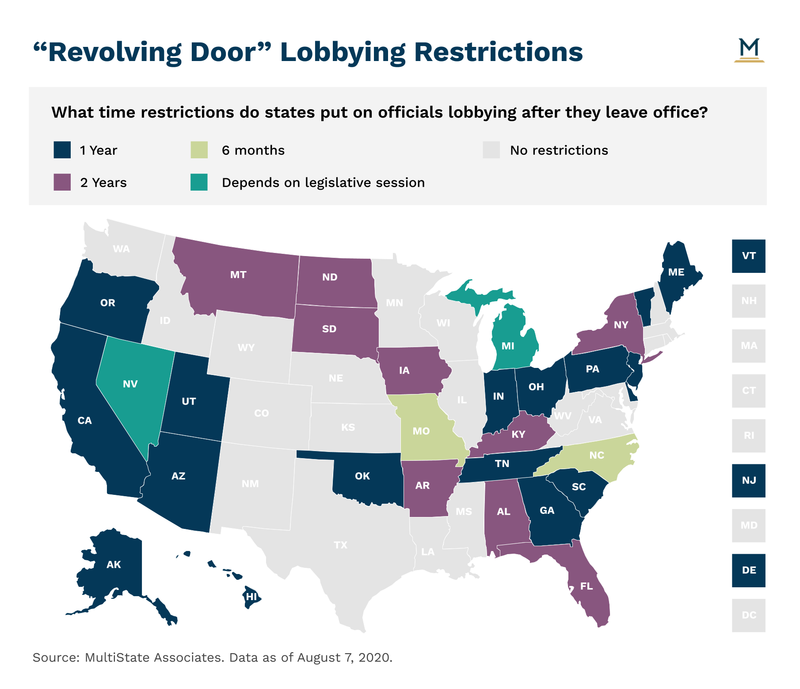 What Qualifies as Lobbying?

What actually qualifies as lobbying in each state is another important aspect to consider. Revolving door restrictions apply to lobbying as defined by the state, so in Nevada, for example, that does not include any activity that does not occur at the physical State House. So in Nevada, the revolving door restrictions would not apply to former legislators and public officials conducting lobbying activity outside of the State House.

In Michigan, activity is only considered lobbying when an individual is communicating directly with a legislator or member of state government. Because of its limited definition, former legislators in Michigan could participate in ad campaigns or other indirect forms of lobbying. To be certain of what is considered lobbying, gain access to the MultiState Compliance Guides to navigate through the rules in each jurisdiction.

Are There Any exceptions?

There are a handful of exceptions to states revolving door rules. In Michigan, members of the legislature who resign from office are restricted  from lobbying for the remainder of what would be their term. In Nevada, there are three specific instances where former legislators are allowed to engage in lobbying before their restriction period ends, each tied to the individual’s employment.

North Carolina sets the time restriction as either the close of the legislative session or six months after leaving office, whichever is later. Additionally, Utah allows an exception to their one year time restriction for individuals who lobby on behalf of themselves or a business whose primary purpose is not lobbying or government relations.

It is important to remember that each state sets their own rules on who can lobby and when. Be sure to review each state’s guidelines on revolving door restrictions by gaining access to the MultiState Compliance Guides.