Despite legislative sessions in many states being truncated due to the COVID-19 pandemic, state lawmakers introduced hundreds of bills on policing reform in 2020. In 2021, this topic has grown even more prevalent with legislators. Currently, lawmakers have introduced over 550 policing reform bills in 47 states this year. Of these, 41 bills have passed one or both chambers of the legislature, and 18 have been enacted into law. Policing reform bills touch on a variety of specific policy areas, and highlight particular trends. 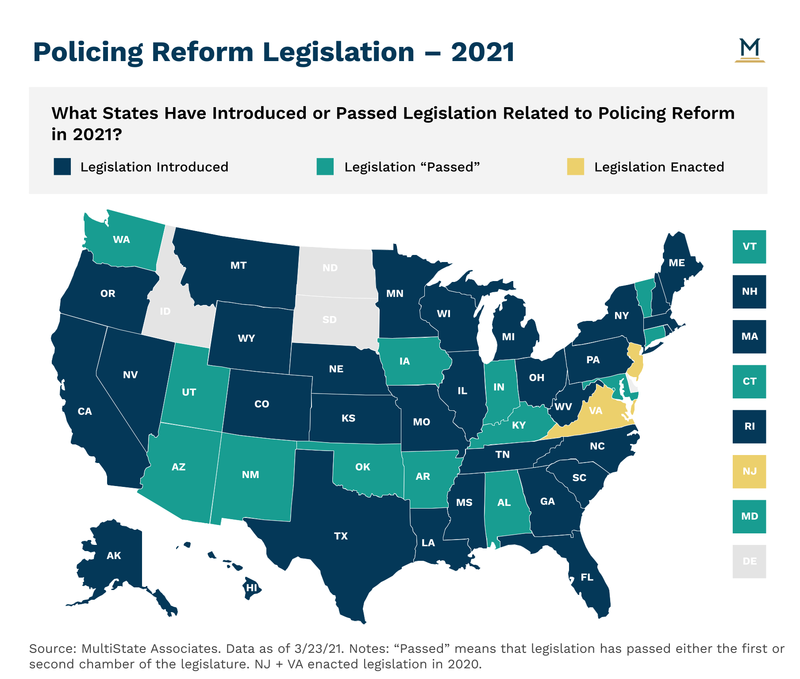 Accountability issues continue to make up a substantial portion of all the policing reform bills this session. Body cameras have long been considered a key plank of policing reform, on the basis that creating a visual record of police interactions with the public establishes key evidence for investigations of excessive use of force; on April 1, Governor Eric Holcomb (R) of Indiana signed into law IN SB 1006, which among other things provides that a law enforcement officer who turns off a body-worn camera with the intent to conceal a criminal act commits a Class A misdemeanor. States have also introduced an array of bills empowering these investigations into critical incidents and providing transparency to the public when incidents occur; in March, Governor Spencer Cox (R) of Utah signed into law UT SB 13, which enacted new standards for incident investigations. States have proposed new rules that would prohibit the hiring of officers with histories of excessive use of force and would require the decertification of current officers found to engage in an excessive use of force. Together, these provisions appear in just under half of all current policing reform bills.

An issue that has gained momentum this year is the restriction or prohibition on the use of no-knock warrants. Advocates say that the aggressive, unannounced entry of police officers executing a warrant creates an environment ripe for conflict, leading to shootouts such as the one that killed Breonna Taylor during the execution of a warrant last year in Louisville, Kentucky. In March, the Kentucky legislature passed legislation (KY SB 4), which restricts the practice, and is currently awaiting Governor Andy Beshear’s (D) signature.

Other important issues prevalent last year remain a focus for legislators in 2021. Thus far, state lawmakers have introduced 53 bills regarding a duty to intervene and a duty to report. These bills create an affirmative duty for any police officer to intervene and report to a supervisor when they see another officer engaging in an excessive use of force; some of these bills go as far as creating civil liability for officers who fail to intervene. States continue to focus on enacting new standards for the use of force, with 136 bills on the topics of de-escalation, use of force as a last resort, and prohibited means of restraining or arresting subjects; a Washington bill, WA HB 1054, prohibits the use of chokeholds, tear gas, or unleashed dogs by law enforcement. Training of officers also remains a priority: currently, lawmakers have introduced 76 bills on police training, many of which require officers to be trained on the new standards for the use of force, or on the ways that implicit bias affects their interactions with civilians without being noticed.

The enormous volume of legislation on policing reform in both 2020 and 2021 marks it as an issue that will be a major focus for years to come, after years of efforts by activists to bring more attention to the cause. States have enacted landmark legislation in a relatively brief span of time, and many other bills are passing through legislatures controlled by both parties with relatively little controversy.

Explore some of our recent analysis of state policy activity on Corporate Social Justice topics on MultiState Insider. Contact us to learn how MultiState can help you keep track of the legislation that matters to your organization.