October 2021 update: Five states enacted the CROWN Act or laws inspired by the CROWN Act during their 2021 legislative sessions. For an up-to-date map, visit our Corporate Social Justice Landing Page.

From movie star Zendaya to a preschool in Chicago, hairstyles associated with black culture have been a subject of much media attention lately. They have also been a popular topic within state legislatures this session.

Model legislation called the Creating a Respectful and Open World for Natural Hair (CROWN) Act is gaining significant momentum across the country. Generally, the legislation would add hairstyle and texture to the statutory definition of race. Protected hairstyles listed include knots, twists, locs, and braids. This change would mean that employer policies prohibiting or discouraging such hairstyles would be illegal. Further, any negative action toward an employee, such as being sent home or getting “written up,” based solely on the employee’s hair, would be discriminatory. Violations could result in fines against employers found in violation of the law and potential civil litigation.

The CROWN Act is a project of the CROWN Coalition. According to a study conducted in 2019 by supporters of the legislation, black women are 30 percent more likely to be made aware of a workplace appearance policy than other women. The study further found that black women are more likely than non-black women to be sent home from work because of their hair. The CROWN Act’s goal is to change perceptions of black women’s natural and cultural hairstyles and make the workplace more accepting and welcoming for women of color. 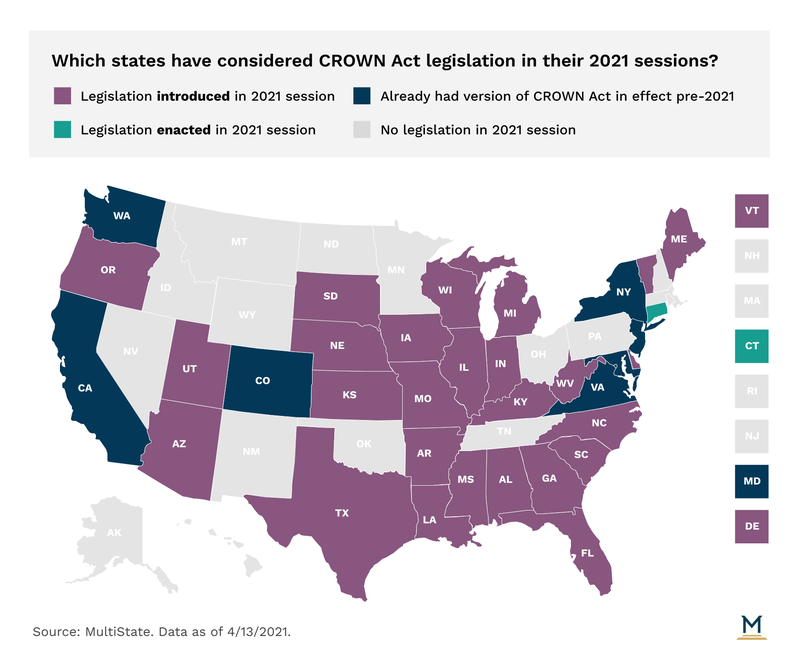 Eight states have already enacted a version of the CROWN Act and bills are currently pending in 27 additional states this year. For example, lawmakers in Mississippi introduced a version of the CROWN Act this year, however, the bill failed to pass before adjournment. Despite its recent ubiquity in state legislatures, the action in Mississippi may be indicative of its chances this year. CROWN Act bills have failed to move past chambers of origin in nearly all states where it was introduced this session with two exceptions: Connecticut and Delaware. In Connecticut, the bill sailed through both chambers easily and quickly: nine days from introduction to governor’s signature. While it took a little longer in Delaware, the bill still passed both chambers unanimously and is currently awaiting the governor’s approval.

The EEOC reported nearly 24,000 claims of racial discrimination in FY 2019. This represented 33 percent of all claims of discrimination. Monetary awards from these claims reached about $80 million. It’s unclear how the CROWN Act will impact these numbers. States that have adopted the CROWN Act don’t present a clear trend and data doesn’t indicate whether or not hair was a factor in those claims.