In a few weeks, voters in Arkansas, Maryland, Missouri, North Dakota, and South Dakota will go to the polls to decide if recreational marijuana should be legalized in their respective states. Below we take a look at how these ballot measures were approved in each jurisdiction and what they aim to do.

It was only six years ago that Arkansas voters approved a medical marijuana program. Now, those same voters will be faced with the question of whether or not recreational marijuana should follow suit and be legalized. The measure, sponsored by Responsible Growth Arkansas, was placed on the ballot in September after the state Supreme Court ruled that the Board of Election Commissioners' decision to disallow it from appearing on the ballot was invalid. If approved, possession, use, and consumption of recreational marijuana will be permitted for persons 21 and older. Additionally, the measure expressly authorizes commercial sales, implements a 10 percent sales tax, and provides details related to licensing

Earlier this year, lawmakers in Maryland passed a legislatively referred constitutional amendment (MD HB 1) that poses the question of marijuana legalization to the voters. If passed, Marylanders 21 and older would be allowed to use and possess marijuana for recreational use beginning on or after July 1, 2023. The General Assembly would be tasked with regulating the use, distribution, possession, and taxation within the state. Recreational use and possession would not begin until at least July 1, 2023.

In September, a measure brought forth by Legal Missouri 22 was officially approved to appear on the upcoming ballot. A final legal hurdle was cleared after a Cole County Circuit Court judge dismissed a lawsuit that sought to block the question of legalization from appearing on the ballot. The measure in question would legalize the possession, purchase, consumption, and cultivation of marijuana for persons 21 and older. Additionally, persons with non-violent marijuana-related offenses would have their criminal records automatically expunged. Proponents of Measure 3 include the ACLU of Missouri and the Missouri Association of Criminal Defense Lawyers, while opponents include Governor Mike Parsons (R) and State Representative Ashley Bland-Manlove (D).

In 2018, North Dakotans rejected a measure that would have legalized adult-use marijuana for persons 21 and older. This year they’ll have another chance to cast their votes on the issue. On August 15, Secretary of State Al Jaeger (R) announced that an adult-use marijuana legalization measure submitted by New Approach North Dakota will appear on this November’s ballot. If passed, Measure 2 would allow persons 21 and older to possess certain amounts of marijuana and marijuana products as well as permitting home cultivation. The North Dakota Department of Health and Human Services would be tasked with establishing an adult-use marijuana program by October 1, 2023. Legislation with similar language was defeated in the state senate during the 2021 session.

North Dakota’s neighbor to the south will also be voting on marijuana legalization during the upcoming midterm election. The measure, introduced and sponsored by South Dakotans for Better Marijuana Laws, was approved to appear on the ballot by Secretary of State Steve Barnett (R) on May 25. If approved, Measure 27 would legalize the use, possession, and distribution of marijuana for anyone 21 and older while also permitting home cultivation of up to three marijuana plants (six per private property) for persons living in a jurisdiction where a licensed retail store is not present. As in North Dakota, this is not the first time legalization has been on the ballot in South Dakota. In 2020, voters approved Amendment A, a measure that legalized marijuana, by a margin of 54 percent. The victory was short-lived however as the state supreme court upheld a ruling that declared the measure unconstitutional because it violated the requirement that constitutional amendments only relate to one subject. Proponents of the 2022 measure hope that by only focusing on legalization they will be able to avoid further court interference.

Though supporters of recreational marijuana legalization were successful in placing measures on the 2022 ballot in the states listed above, efforts to do so in Nebraska, Ohio, and Oklahoma fell short this year. Below we examine the roadblocks these campaigns faced during the approval process.

On July 7, 2022, Nebraskans for Medical Marijuana submitted over 90,000 signatures to the Secretary of State seeking to have two ballot measures related to medical marijuana approved. Six weeks later Secretary of State Bob Evnen (R) released a statement saying that both the Medical Cannabis Patient Protections Initiative and the Medical Cannabis Regulation Initiative failed to meet the state’s signature requirements. Approval requires signatures by at least 7 percent of total registered voters and 5 percent of registered voters in at least 38 of the state’s 93 counties. The Patient Protection Act would have permitted the use of up to 5 ounces of medical marijuana by qualified patients while the Medical Cannabis Regulation Act would have legalized the use, possession, distribution, delivery, sale, and manufacture of medical marijuana. A similar ballot measure was rejected in 2020.

The path to place a recreational marijuana legalization measure on the 2022 ballot saw many twists and turns over the past year in Ohio. The Coalition to Regulate Marijuana Like Alcohol initially filed language for a legalization measure in July of 2021. That ballot summary was rejected so the campaign submitted an updated version which was eventually approved. Almost six months later over 200,000 signatures were submitted to the office of Secretary of State Frank LaRose (R). Here’s where things get complicated. Upon review, Secretary LaRose informed the coalition that over 87,000 signatures were deemed invalid and thus they would need to submit an additional 13,000 signatures for approval. At the end of the 10-day grace period, the campaign submitted enough signatures to meet the threshold only to be told that they missed the cut-off for the measure to appear on the 2022 ballot. After filing a lawsuit to attempt to get the measure on this year’s ballot the coalition decided to delay their campaign until 2023.

Similar to efforts in Ohio, advocates of placing a recreational marijuana legalization measure on the 2022 ballot in Oklahoma faced a number of challenges throughout the certification process. Campaign organizers were met with a litany of legal challenges delaying the approval of the measure. Eventually, the state supreme court ruled that State Question 820 (SQ820) would not be eligible to appear on this year’s ballot as the challenges had not been resolved in time. Though the measure will not appear on the 2022 ballot, Governor Stitt (R) announced on October 18 that a special election will be held on March 7, 2023, for SQ820. This is not the first time Oklahomans will be faced with a marijuana related ballot measure as they approved SQ788 in 2018 which legalized medical marijuana in the state. 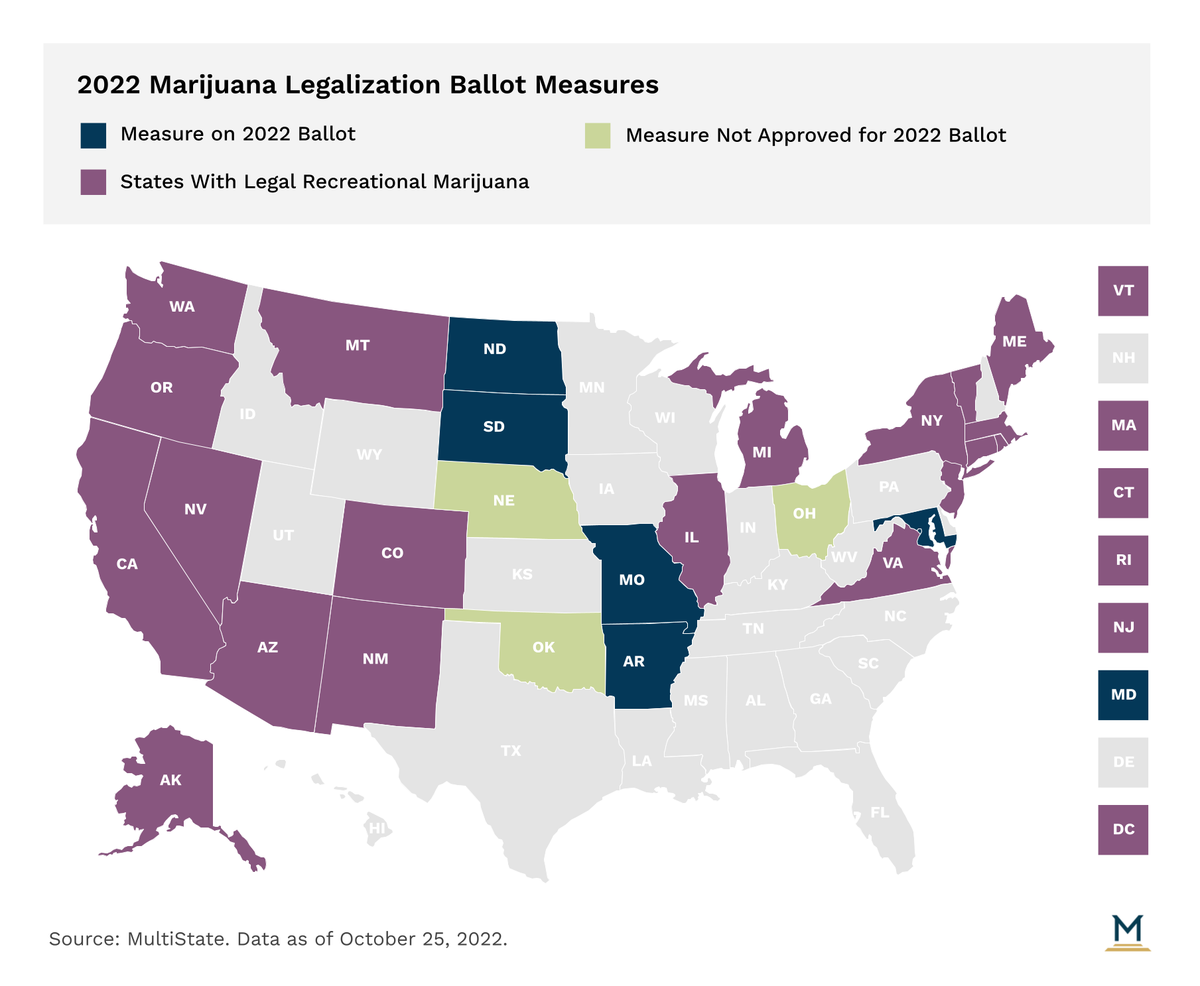