The expected red wave turned into a blue ripple on Tuesday in the states. Instead of Republicans adding to their major lead in state legislative and gubernatorial control, Democrats are currently on pace to pick up at least two additional governor’s seats as well as take complete control of the Michigan and Minnesota legislatures — netting Democrats four new state trifectas in 2023.

But while Republicans failed to capitalize on opportunities to add to their political majorities at the state level, the GOP will still enjoy leads at state-level politics they’ve dominated since the 2010 elections. Republicans shored up their numbers in states like Florida, where they gained legislative supermajorities, and Iowa, where they defeated the long-time incumbent Democratic AG. While there are still many state legislative votes remaining to count, Republicans are still expected to have over 20 state trifectas versus only 18 for Democrats. However, if Democrats win the remaining uncalled toss-up races, then we could see a 25 to 25 tie in political control of the governorships in 2023.

States are still tallying the votes, but this is what we know so far this morning.

State election watchers anticipated major action in the 36 governor’s races on Tuesday with nine races rated as toss-ups, leans, or tilts by election forecasters. Instead,  what we saw was domination by incumbents and largely status quo elections. Democrats came away with big, if expected, gains with victories in Massachusetts and Maryland, after popular moderate-Republican governors in those states were not on the ballot. Both states will have Democratic trifectas for the first time in eight years.

Incumbent governors in Maine, Michigan, Wisconsin, Minnesota, and Kansas all survived. However, three out of the four governor’s races we expected to be toss-ups — Oregon, Nevada, and Arizona— are still too close to call. Nevada Gov. Steve Sisolak (D) is trying to avoid becoming the only incumbent governor to lose reelection this cycle.

Finally, women governors had a record night. Ten women have already secured gubernatorial election for 2023, and with all women candidates vying for the uncalled races in Oregon and Arizona, we’re guaranteed to have a record twelve women governors in 2023. The historic high point of women governors across the country is the current nine. 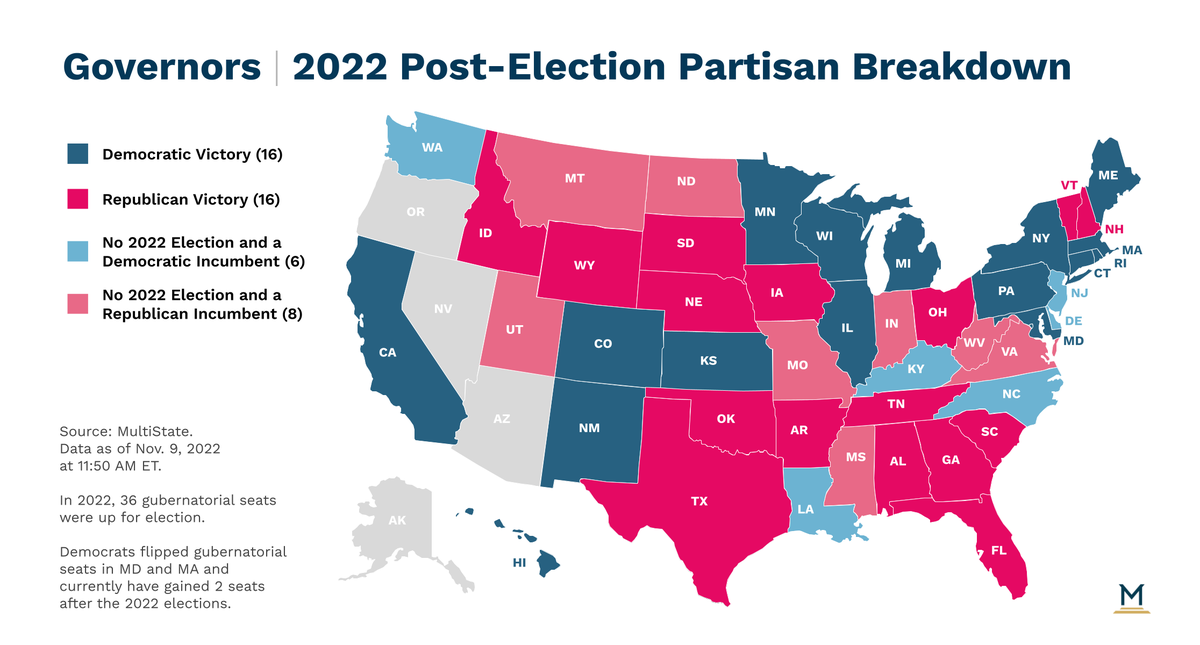 We expected less movement in state legislatures after redistricting shored up many safe seats for incumbents. One exception was Michigan, where an independent commission drew a competitive map, putting both legislative chambers in play. And Democrats took advantage by securing new majorities in both chambers for the first time since 1983 and securing a trifecta in Michigan.

The other big flip for Democrats was the Minnesota Senate. The Gopher State had been the rare split legislature for many cycles now, where Democrats held a majority in the house but Republicans maintained a majority in the state senate. But Democrats appear to have secured enough seats to take control of the senate on Tuesday, giving them another new trifecta in 2023.

Republicans also look in danger of losing their majority control in the Pennsylvania house.

Democratic trifecta gains in Massachusetts, Maryland, Michigan, and Minnesota will put the total trifecta numbers at historic highs. If these numbers hold, 2023 will see 41 states with one political party in control of both chambers of the legislature as well as the governorship — the highest number of trifectas in the modern era.

Democrats have won a new supermajority in both chambers of the Vermont Legislature. Although, in effect, this is less significant because while Vermont Democrats are currently eight seats short of a supermajority in the state house on paper, in practice, a dozen Progressive Party and independent legislators work with Democrats to effectively govern as a supermajority with the ability to override Gov. Phil Scott’s vetoes.

Similarly, Republicans also fell short of gaining a supermajority in Wisconsin, their second-best supermajority pickup opportunity in a state with a Democratic governor. While GOP lawmakers appear to have secured the necessary seat to gain a supermajority in the state senate, they picked up only 3 of the 5 seats needed for a veto-proof majority in the house that would have been able to override  Gov. Tony Evers’ vetos.

Additionally, Republicans appear to have secured new supermajorities in both chambers of the Florida Legislature and the South Carolina House. These supermajority gains have a less direct effect on policy since both states have Republican governors.

Outside of the gubernatorial races, we focused our attention on lieutenant governors, attorneys general, and secretaries of state.

The biggest upset in these races might be Republican Brenna Bird defeating Tom Miller to become the next Iowa Attorney General. A Republican winning in Iowa might not seem surprising, but Miller had held on to the AG seat for 10 terms — 40 years — the longest-serving official in that post in any state. This was the only AG seat to flip political parties this cycle.

Maryland and Massachusetts will have Democratic lieutenant governors for the first time in eight years, who were elected as joint tickets along with the two new Democratic governors. No other party flips in the lieutenant governorship races, although Arizona voters approved a measure to create an Office of Arizona Lieutenant Governor.

So far, no secretary of state seats have flipped political control. Although competitive races in Arizona, Nevada, and Wisconsin remain uncalled.

Reproductive health care was on the ballot in five states. Voters in California, Vermont, and Michigan approved measures cementing access to abortion procedures into their state constitutions. Kentucky voters rejected a measure that would have stated no such abortion protections would be found in the state constitution. And a referendum that would require that any infant that is born alive, at any stage of development, is considered a legal person is narrowly trailing in Montana.

Voters in five states had the opportunity to legalize marijuana for recreational use, joining 19 other states. But while voters approved legalization efforts in Maryland and Missouri, ballot measures in Arkansas, North Dakota, and South Dakota all failed yesterday. However, South Dakotans did approve a measure to expand Medicaid in the state. Nebraska voters approved a measure that will increase the state’s minimum wage from $9 to $15 by 2026 with annual cost of living adjustments thereafter.

And in California, voters rejected two high-profile measures that would have legalized sports betting in the state as well as saying no to a major initiative that would have increased taxes on high-income earners and dedicated the revenue to zero-emission vehicle incentives and projects as well as wildfire prevention.