In response to the ​​National Suicide Hotline Improvement Act of 2018, the Federal Communications Commission (FCC) established a system in 2020 whereby callers can dial 9-8-8 and be redirected to official the National Suicide Prevention Lifeline. Due to some of the complexities of this new system — and in an effort to increase public visibility — the regulatory action provided that the 988 line would go into effect in July 2020.

While the federal government has wide authority to set communications policy via the FCC, the actual establishment of the new 988 system falls to the states. Much like emergency response services distributed through the 911 system, states are responsible for establishing levels of oversight, administration, and funding for the new 988 system.

State lawmakers have steadily introduced and debated legislation related to the 988 system over the last 18 months, but the work is ongoing and legislatures are taking different approaches, particularly on how funding the 988 systems will work. The primary dividing line between states is whether they opt to fund the program by levying a new fee on telecommunications customers or pay for the new system with ongoing appropriations from the state’s general fund.

Of the legislation enacted so far, four states (Colorado, Nevada, Virginia, and Washington) would establish new fees to fund the 988 program, four would establish study committees to provide recommendations to the legislature (Mississippi, Nebraska, New York, and Utah), and three would fund the program with existing budget appropriations (Indiana, Maryland, and West Virginia). 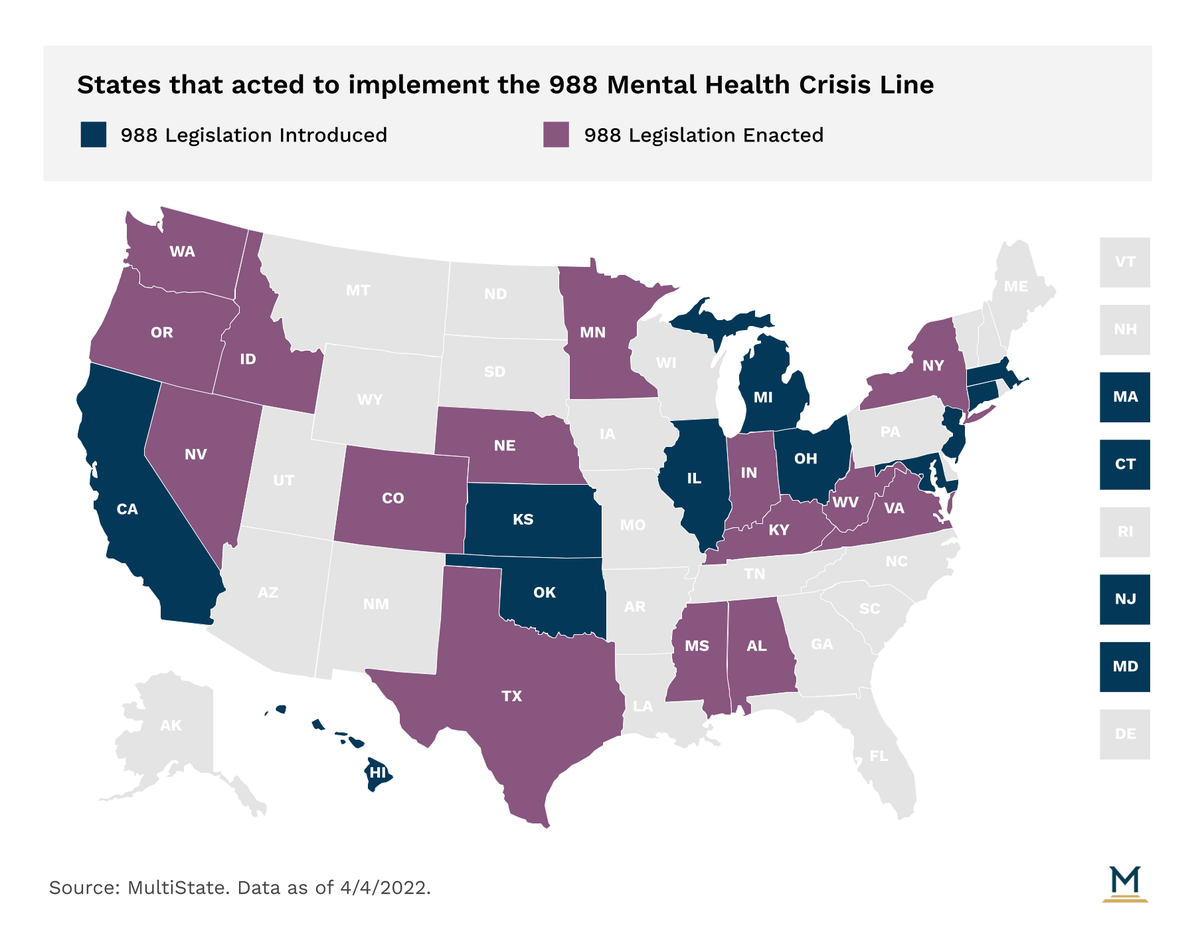 It’s still early, but so far most of the states that have created dedicated funding for the 988 system have established new fees. These pro-fee advocates argue that states already collect dedicated fees to pay for emergency 911 systems, so the 988 line should follow a similar model. The pro-fee position also has the political benefit of providing funding for the FCC mandate without needing to make any budgetary decisions about what other existing programs to take money from.

On the pro-budgetary appropriations side, proponents argue that the current 911 system is not actually as stable a source of funding as the pro-fee crowd believes. They point to a 2015 report by the National Association of State 911 Administrators that found 911 funding declining in most states. The pro-budget side argue that if lawmakers want the Suicide Prevention Hotline 988 to succeed, it needs to include the more robust fiscal support offered by a budgetary line item. Under this system democratically elected lawmakers can deliberate and debate what appropriate funding levels should be and can adjust it through a transparent process.

The United States is struggling through a mental health crisis and lawmakers are trying to make valuable services more widely available. As they consider the technical mechanisms underpinning these efforts, however, experts argue that they should not abandon legislative best practices of reliability, clarity, and equality. If lawmakers insist on pursuing new fees, telecommunications experts have a set of best practices that those fee statutes should incorporate.

First, experts argue that a new fee should be imposed on all services that can reach 988 and the new fees should be limited to only funding access to the line itself and not the underlying services. They argue that 911 fees do not directly fund EMS or police stations, that funding comes from a separate appropriation. Similarly, they argued that the 988 fee should not be designed to provide funding for the counselors and other professionals staffing the suicide hotline.

Additionally, lawmakers should ensure that the fee is levied on a wide range of telephony services. A number of bills that have been introduced would only apply the fee to Voice Over Internet Protocol (VoIP) or wireless lines, but if policy makers want a stable funding source, they should utilize the widest base possible, which means that landlines should also be factored in.

Finally, to minimize administrative burdens, experts advise that fee requirements should use clear, unambiguous language in establishing the extent and limits of their levy. For example, some fee language provides that state administrators can set the fee rate to ensure sufficient funding for the 988 program. This kind of open-ended authority creates significant uncertainty for taxpayers because, outside of the legislative process, rates can be set and changed much faster and with less notice.