State legislatures are considering and advancing a broad range of social justice policies, from police and criminal justice reform to corporate board diversity and voting rights. The business community broadly is becoming increasingly engaged on these important policy issues. Our team is actively identifying, categorizing, and tracking these issues so that organizations, their government affairs professionals, and other internal stakeholder teams have the information they need to navigate and effectively engage with the new world of corporate social justice.

Below are a few of the main topic areas that have emerged in the Corporate Social Justice space over the last year. Note that this isn’t an all-inclusive list of the policy areas that businesses have engaged on and is only meant to provide examples. For a comprehensive resource on voting and elections, please see our State Voting and Election Laws dashboard and landing page.

Social justice advocates are pushing lawmakers to mandate more diversity in corporate America, whether it be in boardrooms, at the management and executive level generally, or in certain industries.

Advocates have lobbied for legislation that requires at least one woman or person of color to serve on a publicly-traded board. In 2020, California lawmakers updated its landmark 2018 law to require that at least one director on a corporate board come from an underrepresented community by the end of 2021. Following California’s decision, a total of seven states had enacted some type of board diversity measures (as of March 2021).

Model legislation called the Creating a Respectful and Open World for Natural Hair (CROWN) Act is gaining significant momentum across the country. Generally, the legislation would add hairstyle and texture to the statutory definition of race, making employer policies prohibiting or discouraging protected hairstyles illegal. The CROWN Act’s goal is to change perceptions of black women’s natural and cultural hairstyles and make the workplace more accepting and welcoming for women of color. 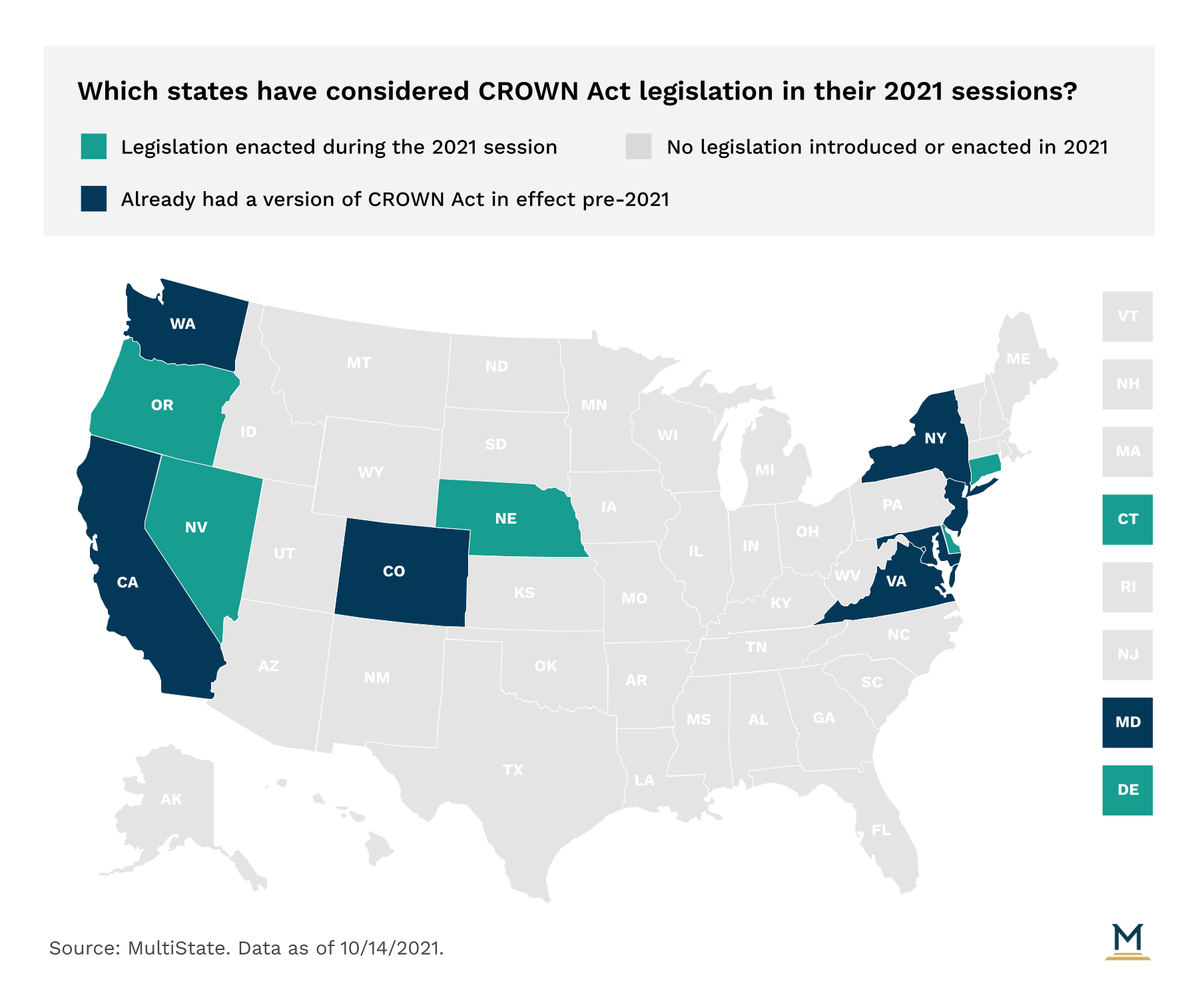 Over 100,000 workers with disabilities are currently earning an average of $2.15 per hour under a federal program granting certificates to provide disabled employees jobs. Six states have enacted repeals of the subminimum wage, and eight others have legislation currently pending (as of May 2021). There is also a push to repeal the federal law that set up the subminimum wage program.

In 2021, hundreds of bills on policing reform were introduced in state legislatures. These bills address a wide array of specific reforms, including increased accountability, restrictions on dangerous policing practices, and new training and standards on the way officers interact with communities.

The enormous volume of legislation on policing reform in both 2020 and 2021 marks it as an issue that will be a major focus for years to come. States have enacted landmark legislation in a relatively brief span of time, and many other bills are passing through legislatures controlled by both parties with relatively little controversy. 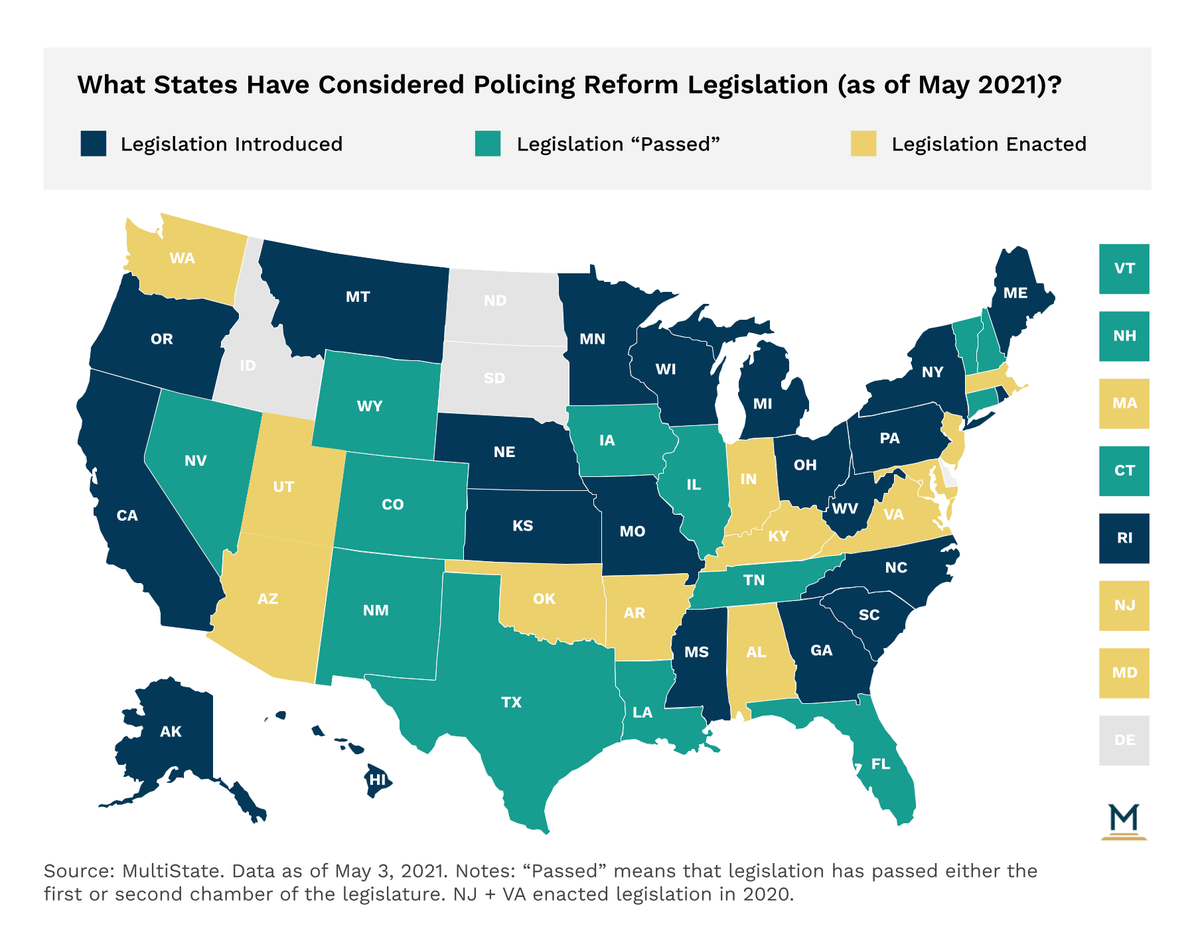 North Carolina Governor Roy Cooper (D) signed into law one of the most comprehensive pieces of policing reform legislation recently enacted by any state. The law contains a variety of provisions intended to increase police officer accountability, reduce the number of officer-involved “critical incidents,” and increase transparency of policing. The bill passed unanimously in the Senate and by a vote of 100-2 in the House, indicating a degree of bipartisan support for the legislation that suggests it as a potential model in other states.

Now that a bipartisan policing reform effort in Congress has failed, police reform proponents look to make headway in state legislatures. As of October 2021, seven states and D.C. have adopted restrictions or bans on neck holds during the 2021 legislative sessions. States have made similar progress on the issue of no-knock warrants. Since the beginning of the current sessions, seven states have adopted bans or restrictions on the use and execution of such warrants.