Direct Democracy in Action: A Guide to State Ballot Measures

Home
/
Insider
/
•••
Share
Voters will head to the ballot box tomorrow, and, depending on the state, might encounter questions beyond who to vote for in statewide or local elections. This form of direct democracy — often referred to universally as ballot measures — comes in different flavors, and the purpose of this blog post is to provide an overview of each procedure and how they differ by state.

The initiative, referendum, and recall powers allow voters in some states to take direct action to enact statutes, constitutional amendments, or remove elected officials from office.

The history of direct democracy is the United States primarily dates back to the progressive era. In 1898, South Dakota became the first state to authorize its citizens to use the popular referendum process to repeal specific statutes that the state legislature passed. Over the next 20 years, nearly half the states amended their constitutions to allow voter-led initiative, referendum, and/or recall processes. These tools of direct democracy — allowing citizens to have a direct say in public policy in the state as opposed to relying on their elected officials under the republican system — were a response to corruption scandals rampant in state legislatures of the era. Today, these systems remain a core part of the state public policy system, with 154 measures appearing on statewide ballots in 2016. 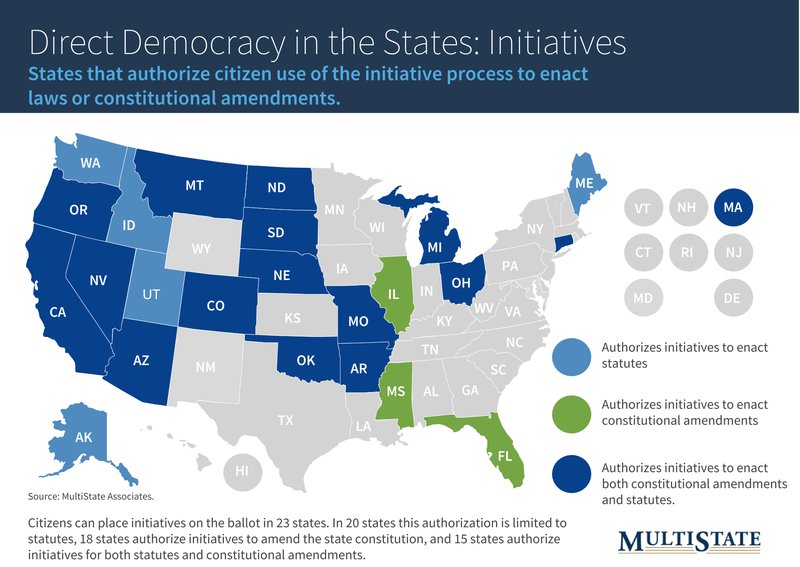 A direct initiative (often referred to simply as an “initiative”) is a process in 19 states by which citizens can bypass state legislatures to place proposed statutes (in 14 states) or constitutional amendments (in 16 states) directly on the ballot for voter approval. 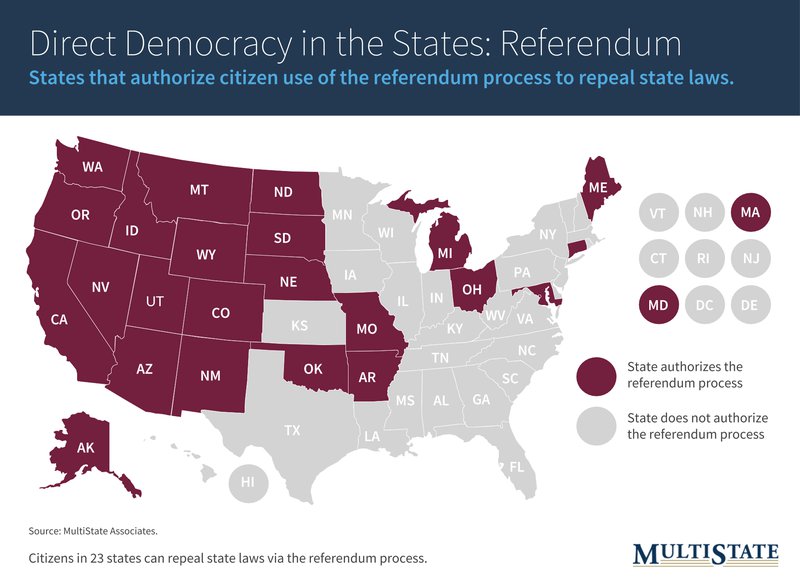 The advisory referendum (alternately called an advisory question) is a rarely used ballot measure that allows some states and localities to place a non-binding question on the ballot to receive voters' opinions. Non-binding advisory questions are not listed on the chart below.

Finally, Nevada is the only state that uses a process called statute affirmation that allows citizens to place a measure on the ballot asking voters to affirm a current law. If a majority of voters affirm the law, then the state legislature loses its ability to amend or repeal that law and that responsibility is left to the voters via the initiative process. 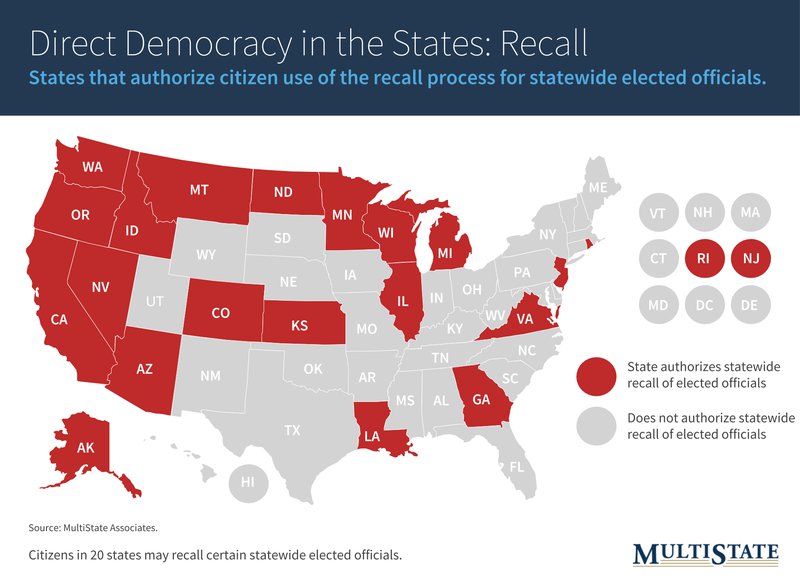 The recall is a process in 20 states that allows citizens to remove elected officials from office before that official’s term has expired. In most recall states, citizens need not provide any specific ground for recalling the official and the question of whether to remove the official from office is placed on the ballot for voters to decide. If voters approve the ballot measure to recall the official, an election is held to replace the official.

Unlike most other recall states, Virginia requires specific grounds for recalling elected officials. After citizens vote to recall an official, the Virginia Circuit Courts will hold a trial to decide if the official had a “material adverse effect upon the conduct of the office."

States hold substantial control over the independent actions of localities within its borders. However, a substantial number of states have authorized localities to practice initiative, referendum, and recall powers. These powers range from broad to extremely narrow (e.g., some states grant cities the power to use initiatives on a limited city by city basis). 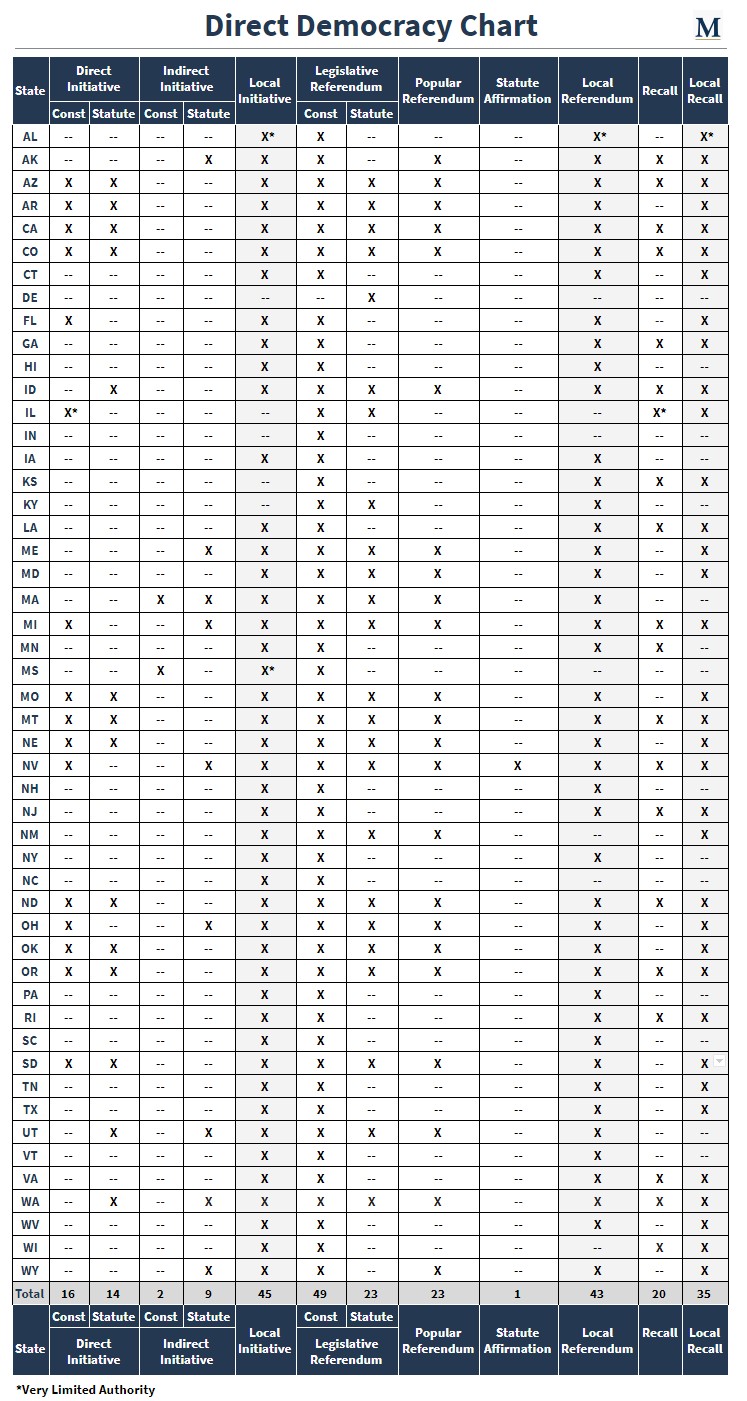