Legislators across the country focused on a variety of employment issues in 2017, from more traditional issues like paid leave and right-to-work laws to emerging issues like predictive scheduling and salary history bans. In places where legislation was introduced, it was seriously considered, leading to new laws in several states. Next year is shaping up to be an active year as well, as employment issues are popular with voters in election years — particularly at the ballot.

This is the fourth post in a series reviewing the top state issues of 2017 and previewing what's ahead in 2018. Earlier posts covered state budget issues, transportation and infrastructure, and data privacy issues.

In August, Oregon became the first state in the nation to enact a predictive scheduling law (also known as "restrictive scheduling" or "fair scheduling"), following the passage of similar local ordinances in San Francisco (2014), Emeryville, California (2016), Seattle (2016), and New York City (2017). The law targets employers in the retail, hospitality, and food service industries, mandating that they provide employees with their work schedule 14 days in advance of their first shift and requiring them to pay employees extra wages for making changes within that window.

In addition to Oregon, 12 states and the U.S. Congress debated predictive scheduling legislation this year, though none of the bills passed out of their chambers of origin. A similar number of states introduced legislation in 2015 and 2016. Thus far, states have been more successful in enacting legislation preempting localities from enacting scheduling ordinances. This year alone, Arkansas (AR SB 668), Georgia (GA HB 243), Iowa (IA HF 295), and Tennessee (TN SB 262) enacted laws preempting localities from regulating employees' schedules. Read More...

In 2017, three states — California, Delaware, and Oregon — banned employers from inquiring into prospective employees' salary histories as part of the application process. Additionally, bills in Illinois and Maine passed both houses of their legislatures before Governors Bruce Rauner (R) and Paul LePage (R) vetoed the legislation in those states, respectively. In total, 24 states, Washington, D.C., and Congress introduced salary history ban legislation this year. At the local level, Philadelphia enacted a ban that would prohibit all employers from inquiring into an employee's salary history. The ban is scheduled to take effect this month, pending the result of a lawsuit. New York City followed suit in April, passing its own ordinance applicable to all employers. Read More...

Paid Sick and Family Leave Laws Continue to Spread
This year, Washington (WA SB 5975) became the fifth state to establish a paid family leave program, which is scheduled to launch in 2020. Upon implementation, it will join California, New Jersey, New York, Rhode Island, and Washington, D.C., all of which have existing programs. Each state offers between four and 12 weeks of paid leave per year to qualifying employees at varying levels of wage replacement. Twenty-five states considered legislation to implement new paid family and medical leave programs this year, and Congress is also debating the issue at the federal level. Read More...

Rhode Island became the eighth state to enact a law mandating that employers provide employees with paid sick leave. Under the new law, effective July 1, 2018, employers are required to provide employees with three paid sick days per year in 2018, four in 2019, and five paid sick days per year in 2020 and thereafter. An additional 20 states introduced legislation on paid sick leave this year. The legislation was popular with legislators in places where it was introduced, passing out of its chamber of origin in five states. Read More...

Early this year, advocates for right-to-work laws secured two major victories, with a new Republican majority in the Kentucky House and Missouri Governor Eric Greitens (R) enabling lawmakers to enact right-to-work laws in those states. Right-to-work laws, which now exist in 28 states, allow employees to decide whether to join or financially support a labor union.

However, opponents in Missouri, backed by funding from organized labor, gathered enough signatures to protest the new law and place a repeal measure on the November 6, ballot. Of the 17 states that currently have a right-to-work statute (with an additional 11 states that have enshrined right-to-work language in their state constitutions), five states (Idaho, Utah, Wyoming, Missouri, and Michigan) authorize their citizens to initiate a popular referendum to place a measure on the ballot that will repeal specific statutes that the legislature passed. Read More... 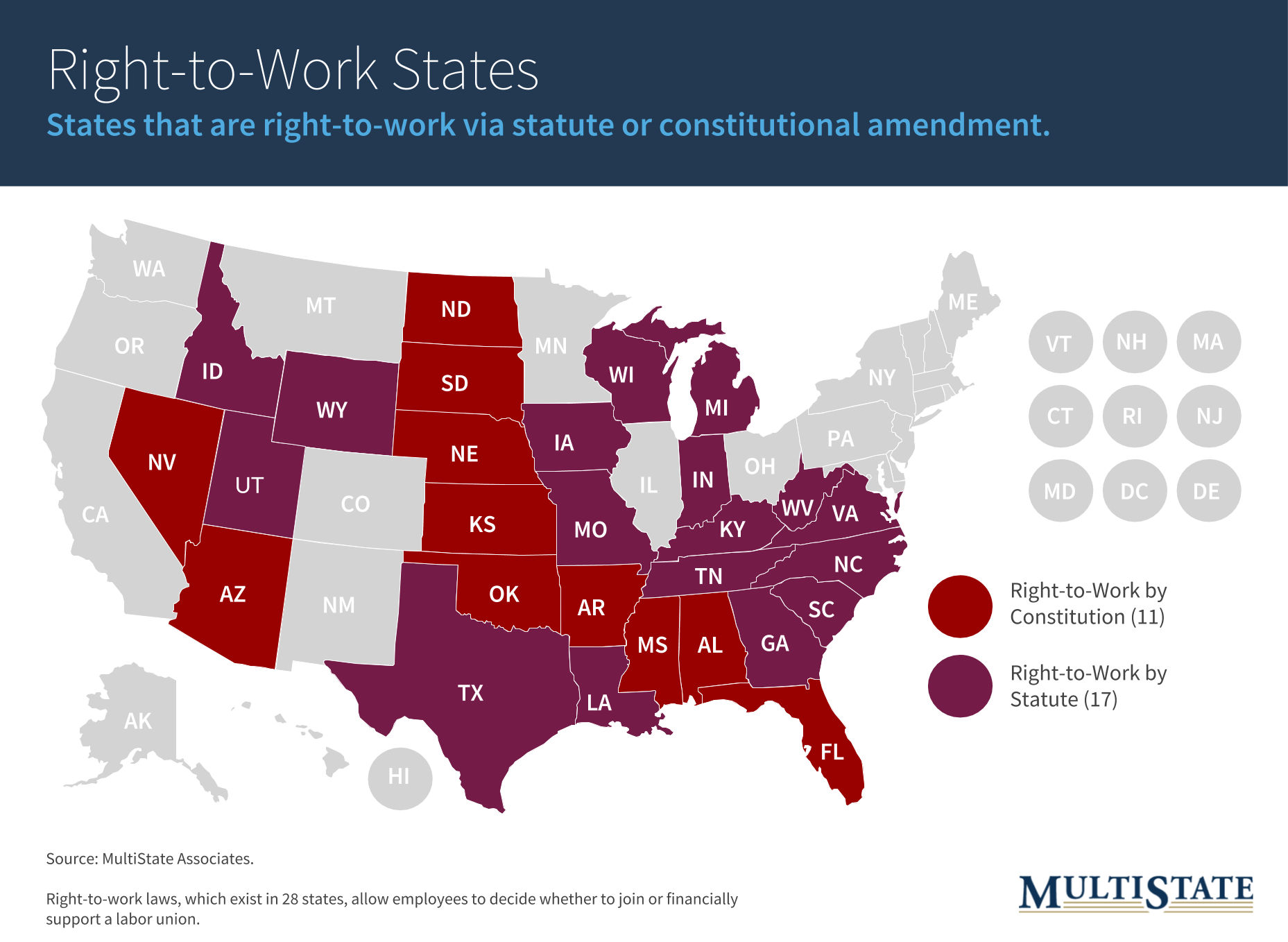 Lawmakers will continue to debate and enact right-to-work, salary history, paid sick and family leave, and predictive scheduling laws in the 2018 legislative session. Keep a close eye on states where these bills passed one or both chambers of the legislature. In Maryland, for example, the legislature is expected to take up the paid sick leave bill vetoed by Governor Larry Hogan (R) sometime in January. The legislature is likely to overturn the governor's veto, but even if it doesn't, the governor has proposed his own alternative paid sick leave bill.

In addition to legislative activity, expect to see a variety of ballot measures on employment-related topics in 2018. In particular, minimum wage increases and marijuana legalization initiatives are popular with voters at the ballot box. Campaigns to put these issues in front of voters are currently underway in a number of states.

Finally, a number of states have already begun pre-filing legislation for 2018 that restrict or ban the use of employee arbitration agreements in sexual harassment cases. Expect a renewed interest in these issues as state legislatures weigh in on the media coverage surrounding sexual harassment claims in the workplace.