Home
/
Insider
/
•••
Share
House Republicans finally revealed their health care plan, the American Health Care Act (AHCA), earlier this month to replace the Patient Protection and Affordable Care Act (ACA or “Obamacare”). Unsurprisingly, AHCA has already come under intense scrutiny on Capitol Hill. Democrats have harshly rebuked the plan, which would retain some portions of the ACA — such as the ban on discriminating against customers with pre-existing conditions — but repeal the individual mandate and change how much insurers can charge enrollees. However, the plan has also drawn some scrutiny from Republicans, not only in Congress, but also from governors across the country.

With the Supreme Court making Medicaid expansion optional, 31 states and the District of Columbia chose to expand their Medicaid programs using federal funds offered in the ACA. Normally, federal and state governments both pay for a share of a state's Medicaid program, but under the ACA, the federal government pays for the entire share of the newly eligible population for a state's expanded Medicaid program until 2017, after which the federal contribution reduces each year and settles at 90 percent in 2020. This is a much larger federal share of funding than the normal Medicaid split, which varies by state but is about 60 percent on average. 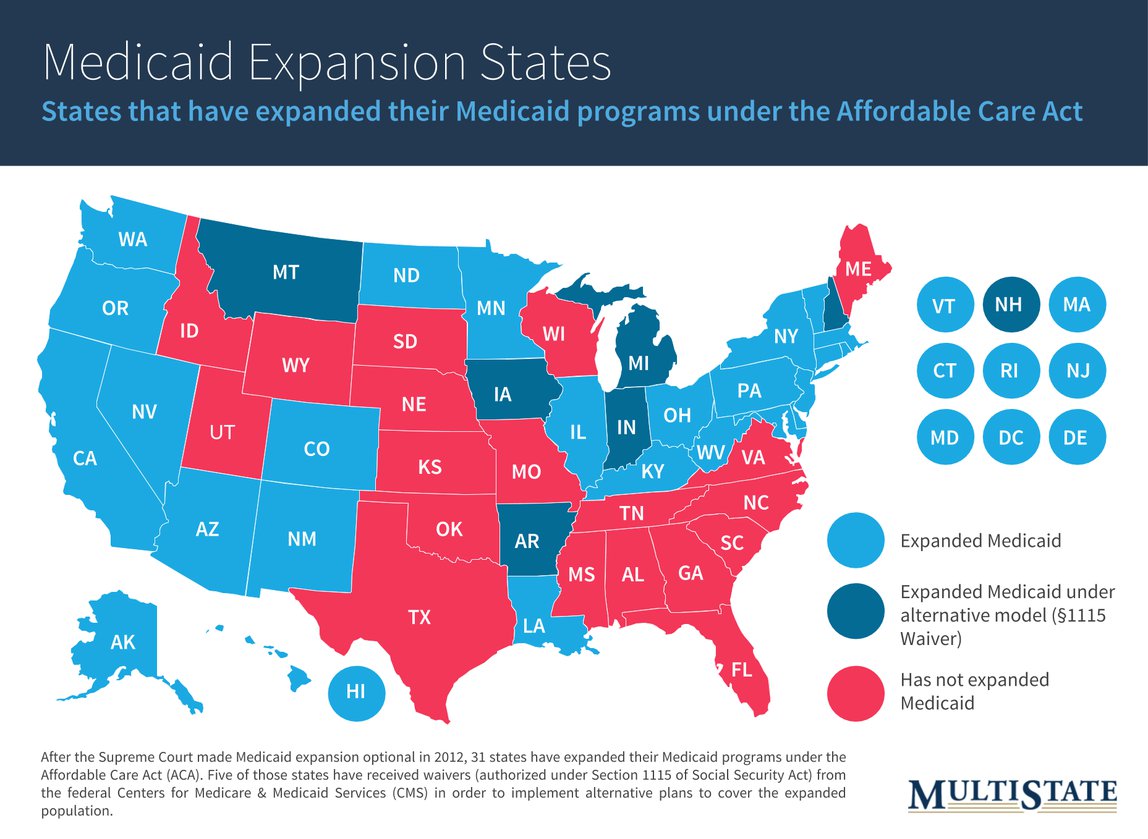 The proposed AHCA would discontinue the Medicaid expansion program starting in 2020. Federal funds would become unavailable to any new Medicaid expansion enrollees after that date, effectively freezing enrollment. Additionally, AHCA would change the Medicaid funding formula from a matching program, where the federal government pays a set percentage of all dollars spent on Medicaid coverage, to a “per-capita capped” allotment, where the federal government pays states only a set amount per enrollee each year and the amount is set by a formula that is predicted to rise slower than the price of medical care.

Congressional Republicans recognize that medical costs are on the rise, and they believe a spending cap is necessary to help slow down the federal government's Medicaid costs. Governors, who run states that must balance their budgets each year, recognize that fewer federal funds to help pay for their low-income populations' medical care will force them into an uncomfortable political choice: spend more state money to cover Medicaid enrollees (and consequently have less money for budgets items like education) or cut Medicaid benefits for their neediest citizens. The Congressional Budget Office (CBO) estimates that implementation of the AHCA would cause 5 million Medicaid enrollees to lose coverage in 2018, Medicaid enrollment to drop 17 percent by 2026, and cost states $370 billion in federal Medicaid funding.

Governors from less conservative states and states that opted to expand the Medicaid program under the ACA have taken issue with changes to Medicaid under AHCA.

Among those expressing concern is Ohio Governor John Kasich (R), who was a primary opponent to President Donald Trump last summer. Although Kasich reaffirmed his opposition to the ACA, he cautioned that “phasing out Medicaid coverage without a viable alternative is counterproductive and unnecessarily puts at risk our ability to treat the drug addicted, mentally ill, and working poor who now have access to a stable source of care.” Ohio has added 700,000 Medicaid enrollees since Kasich went around the legislature to expand the program in 2014.

Governor Bruce Rauner (R) warned that “Illinois won't do very well under the changes that they're recommending, which is a big concern to me." Illinois was one of the first states to expand its Medicaid program under the ACA, and now has over 648,000 enrollees in the state. In Nevada, popular Governor Brian Sandoval (R) stated that his position “has been consistent all along with regard to protecting the 300,000-plus lives that have gained insurance as a result of Medicaid expansion.”

The lack of flexibility under the program is also seen as a concern to Arkansas Governor Asa Hutchinson (R), who called the plan “inadequate.” Hutchinson told CNN on Tuesday that "I do not support this bill as it stands... This cannot be the end product." Maine Governor Paul LePage (R), who has been an unorthodox Republican, said he was “very, very discouraged and disappointed with what House Republicans are introducing,” saying the exchanges set up under the ACA are “wonderful.” Mississippi Governor Phil Bryant (R) attacked the plan from the right, calling the proposal “Obamacare Lite” and called on Republicans to “turn back an entitlement.”

Even governors that appeared last week with Vice President Mike Pence expressed their concerns about the bill. Kentucky Governor Matt Bevin (R) said he agreed with criticisms raised by Kentucky Senator Rand Paul (R), but noted the plan was a “work in progress.”

Other Republican governors were more muted in their concerns. Massachusetts Governor Charlie Baker (R) expressed that he wanted to “make sure that we continue to be a state where virtually everybody is covered and people feel they have the access they need and the coverage they need to stay healthy.” Maryland Governor Larry Hogan (R) stressed the need for a bipartisan solution and suggested Congress work with governors to provide a “compromise solution that gets rid of some of the problems and fixes the issues while still protecting as many people as we can.”

Of course, many Democratic governors came out swinging with criticism of the bill. Oregon Governor Kate Brown (D) called the plan a “radical change that is shortsighted and moves health care backward, not forward.” Montana Governor Steve Bullock (D) called the plan “half-baked,” Washington Governor Jay Inslee asserted that “Trumpcare means less care,” and Connecticut Governor Dannel Malloy (D) did not mince words, predicting “if enacted, this proposal would cause thousands of Americans to die needlessly."

AHCA has already been passed out of two House committees and now sits in the House Budget Committee. House Republican leadership is hoping to aggressively push the bill quickly and get it to the floor by the end of the month.

Late yesterday, the CBO released its score of the AHCA. Critics of the House Republican plan have already pounced on the report — especially its estimate that AHCA would add 24 million uninsured — to attack the AHCA. We'll update this post as governors continue to make their voices heard on this issue. The table below lists full statements from governors and source links.

Update (3/17/2017): In a letter to Majority Leader McConnell and Speaker Ryan, four Republican governors of Medicaid expansion states — Ohio Governor Kasich, Michigan Govenror Snyder, Nevada Governor Sandoval, and Arkansas Governor Hutchinson — write that although they agree with Preisdent Trump's stated principles to provide states flexibility in managing their Medicaid programs and Secretary Price's committment to meet the diverse needs to state Medicaid populalations, the governors lament that "the current version of the House bill does not meet this test. It provides almost no new flexibility for states, does not ensure the resources necessary to make sure no one is left out, and shifts significant new costs to states."

Andy Wagner and Bill Kramer contributed to this post.