Home
/
Insider
/
•••
Share
On Friday, House Speaker Paul Ryan and President Donald Trump failed to convince a majority of the Republican-controlled U.S. House of Representatives to vote in a favor of the long-awaited repeal and replacement of the Patient Protection and Affordable Care Act (ACA, or “Obamacare”). The White House and congressional Republicans indicated that they're moving on from the divisive debate over health care. Minutes after the decision to pull the bill from a floor vote, President Trump called Robert Costa, a national political reporter at the Washington Post, and said, “I’m glad I got [health care] out of the way.” Later that day, Speaker Ryan told the press, “We're going to be living with Obamacare for the foreseeable future.”

But, as we reported last week, even without a new law to replace the ACA, states already have the tools to transform America's health care landscape by making significant changes to a major piece of the puzzle — Medicaid, the program that provides low-income Americans with health insurance — with a little help from the Trump Administration. The combination of greater flexibility, less uncertainty, and the financial pull of federal funds should convince some of the 19 states that have yet to expand their Medicaid programs under the ACA to do so and make major changes in the process.


Medicaid Expansion Under the ACA

In an effort to increase health insurance coverage, the ACA included provisions directing all states to expand their Medicaid programs for residents earning up to 138 percent of the federal poverty level (FPL). However, the the U.S. Supreme Court ruled in 2012 (National Federation of Independent Business v. Sebelius) that the ACA could not force states to expand their Medicaid programs.

As we explained in detail last week, federal waivers (authorized under Section 1115 of Social Security Act) are the key to states overhauling Medicaid and expanding the program under an alternative model. The Centers for Medicare & Medicaid Services (CMS) grants states these waivers so they can implement modified plans to cover the expanded Medicaid population. The Obama Administration used 1115 waivers as a lure to convince conservative governors and state legislatures to expand their Medicaid programs under the ACA.

In 2013, Arkansas Governor Mike Beebe (D) became the first governor to reached a deal with his conservative legislature to expand Medicaid if the Obama Administration would grant the state a 1115 waiver to implement what Arkansas called the “private option.” The waiver Arkansas negotiated with CMS allowed the state to use federal funds granted for Medicaid expansion to help most of the newly eligible population purchase health coverage through the private health insurance exchanges set up under the ACA. Thus, the state still used the federal money intended for Medicaid expansion to provide most of that population with health coverage — it was just private health care instead of traditional Medicaid. Both sides walked away happy. Conservatives shifted potential enrollees of a government program into the private market, and supporters of the ACA provided low-income residents with health coverage (an additional 220,000 people).

Over the next few years, a handful of states joined Arkansas and were granted 1115 waivers (as indicated as dark blue states in the map below).

But the Obama Administration was fairly strict about what it would approve in state 1115 waivers. Although states were successful at gaining approval for smaller concessions in 1115 waivers, the Obama Administration's CMS drew a hard line at any requirements that CMS staff concluded would reduce coverage for those below 100 percent of the FPL. But the Trump Administration has already indicated CMS will now look more favorably on such requests and potentially grant more dramatic changes to state Medicaid programs. 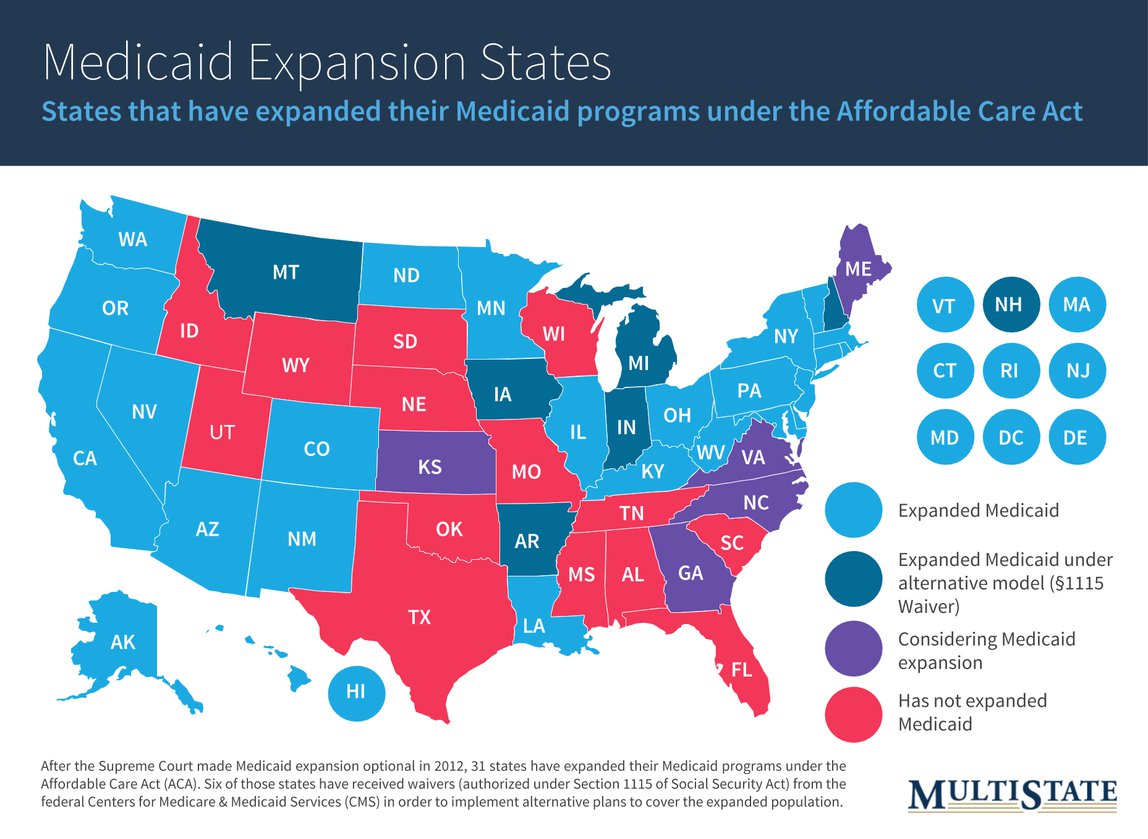 The Medicaid Expansion Debate is Back On

There are three main factors explaining why at least some of the 19 holdout states could now take up expansion:

So, what's all this talk of waivers mean for the future of Medicaid in America? If the Trump Administration's CMS chooses to broaden the type of modifications that states may pursue under the 1115 waiver program, states could make major changes to Medicaid and the program's 70 million enrollees, including requiring work as a condition of eligibility, adding premiums and other cost-sharing requirements for those making less than the federal poverty level, and Arizona's proposal to impose a five-year lifetime limit on Medicaid benefits. Under the Trump Administration, CMS is more likely to grant states waivers for Medicaid requirements that have never been tried before.

Allowing these type of “skin in the game” requirements will allow skeptical conservatives in non-expansion states to consider expanding the program. Currently, four expansion states have pending or announced proposals to update their 1115 waivers (in Kentucky, Indiana, Arizona, and Arkansas). We noted last week that depending on the outcome of these four requests, CMS could see a wave of applications flowing in from the states. But with the premature demise of the congressional effort to repeal and replace the ACA, we could see states pursue expansion even sooner.

The newest factor is less uncertainty. After President Trump's election in November, states braced for major changes to the health care system, particularly to their Medicaid programs. The proposed congressional legislation would have turned Medicaid into a block grant and discontinued the Medicaid expansion program. But now that the congressional ACA replacement looks dead, at least for the time being, the debate to expand Medicaid has returned to the states. Some uncertainty remains, but it's an improvement from the fog that obscured the Medicaid picture between November and last Friday.

The Financial Pull of Federal Funds

One of the strongest and most consistent pressures on states to expand the Medicaid under the ACA is the federal dollars states must refuse in order to stay out of the program.

States that choose to expand their Medicaid programs can take advantage of additional federal funding. Normally, under Medicaid's joint funding system, federal and state governments both pay for a share of a state's Medicaid program. Under the ACA, the federal government pays for the entire share of the newly eligible population for a state's expanded Medicaid program until 2017, after which the federal contribution reduces each year and settles at 90 percent in 2020. This is a much larger federal share of funding than the normal Medicaid split, which varies by state but is about 60 percent on average.

Many conservative governors and state lawmakers campaigned against “Obamacare” and disapprove of the heavy hand the federal government plays in implementing Medicaid programs in the states. A combination of anti-Obamacare sentiment and concerns over the growing costs of the Medicaid programs convinced governors in 19 states to decline the offer to expand their Medicaid programs under the ACA.

But those federal dollars are hard to leave on the table. Additionally, governors recognize that, regardless of their own state's decision, their citizens' federal tax dollars will continue financing new Medicaid enrollees in expansion states. So, while forgoing expansion might be a principled stand to keep the federal debt in check, governors must contend with the political fact that their voters will pay for new Medicaid enrollees in neighboring states either way.

A number of states that had put the brakes on the Medicaid expansion debate after President Trump's election are likely to restart the discussion. So far this year, lawmakers have introduced 29 bills in 13 of the 19 non-expansion states to direct their state to expand Medicaid under the ACA. Five states that have taken notable actions are Maine, Kansas, Georgia, Virginia, and North Carolina.

Maine is the state most likely to expand its Medicaid program. In February, the Maine Secretary of State certified an initiative for the November 7, 2017, ballot that would expand Medicaid under the ACA. The Maine legislature has repeatedly passed Medicaid expansion, but those attempts were thwarted each time by Governor Paul LePage's (R) vetoes. This year, supporters of the measure will bypass the governor by going directly to the voters for approval of Medicaid expansion.

Of all the states contemplating Medicaid expansion, Kansas is garnering the most attention. Last month, the state legislature passed a bill (KS HB 2044) to expand Medicaid to an estimated 150,000 Kansans. The Kansas House voted overwhelming, 81 to 44, to approve the measure. On Tuesday, just four days after Congress failed to vote on its ACA replacement, the Kansas Senate passed Medicaid expansion by a vote of 25 to 14. Kansas Governor Sam Brownback (R) remains the biggest obstacle to expanding Medicaid in Kansas. A spokesperson for the governor said in a statement that “to expand ObamaCare when the program is in a death spiral is not responsible policy.” To override a potential veto, the legislature would need to find 84 House votes and 27 Senate votes. That means supporters will need to convince three additional lawmakers in the House and two in the Senate to support an override.

In what appears to be a direct reaction to Congress's failure to act on health care, Georgia Governor Nathan Deal (R) said his administration is exploring options to modify its Medicaid program via federal waivers, including expansion. Governor Deal's negotiation partner would be a familiar face: U.S. Department of Health & Human Services Secretary and former Georgia Congressman Tom Price. With the ACA's Medicaid expansion program in place for the foreseeable future and the potential for substantial flexibility in modifying the state's Medicaid program, Governor Deal could see an opportunity to transform Medicaid in his state. But this will not be a quick process. In Georgia, the legislature would need to approve the application for such changes, and lawmakers do not appear ready to do so before they adjourn for the year later this week. But the fact that a conservative governor is talking openly about a 1115 waiver as a means to expand Medicaid in the deeply red state of Georgia is significant.

Virginia Governor Terry McAuliffe (D) held a press conference on Monday arguing for state lawmakers to approve his proposed budget amendment, which would allow the governor to expand Medicaid in the state. “There are no excuses anymore,” the governor said. Republican leadership in the Virginia legislature, on the other hand, rejected the premise that the ACA replacement's failure in Congress has shifted the political or policy dynamics on Medicaid expansion. “We rejected expansion in 2013, 2014, 2015, 2016, and again in 2017 because it was the wrong policy for the commonwealth,” GOP House leadership said in a statement. “The lack of action in Washington has not changed that and in fact, the uncertainty of federal health policy underscores the need to be cautious over the long term.”

The defeat of federal legislation to replace the ACA has provided some certainty and reignited the conversation on whether to expand Medicaid in the 19 holdout states. The Trump Administration's promise of greater flexibility has provided a carrot for those 19 states to cut deals with CMS to expand Medicaid on their own terms. And the federal funds flowing to expansion states will continue to put pressure on policymakers in states that have yet to do so.

However, this will not be a fast process. These 19 states have very anti-ACA political environments, and there are good reasons why they have not already expanded their Medicaid programs. Even the five states detailed above have significant hurdles to jump before expansion. It's worth noting that once Congress enacted the original Medicaid program in 1965, it took 17 years for all 50 states to participate and set up their own Medicaid programs.