Only one marijuana-related measure failed on Tuesday when North Dakota voters rejected a measure that would have legalized the use of recreational marijuana in the state and created a process for automatic expungement of marijuana convictions. 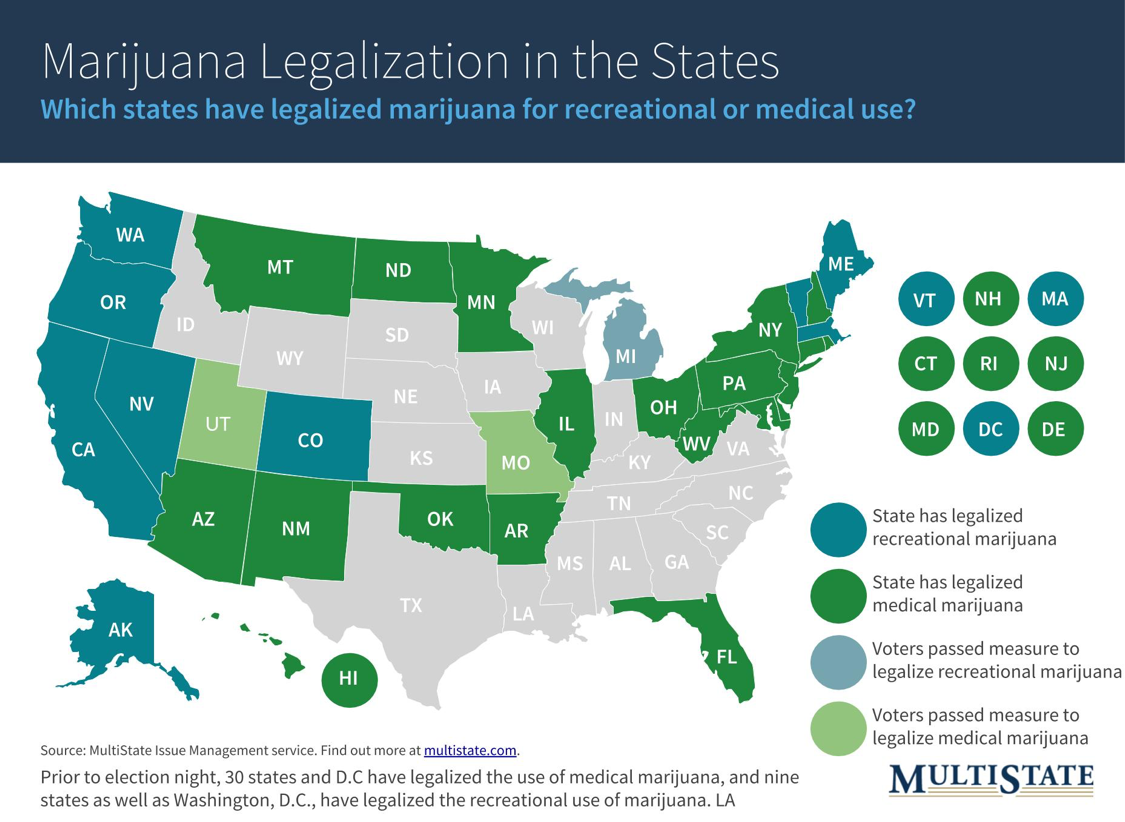 Michigan Proposal One, approved with nearly 57 percent of the vote, legalizes the possession and recreational use of marijuana for adults over the age of 21. Retail sales of marijuana will occur through licensed retailers and be subject to a 10 percent excise tax dedicated toward implementation of the law, research, K-12 education, and the state transportation fund. Under the measure, employers will be able to set their own policies regarding the use of marijuana and retain the right to discipline employees for violating workplace drug policies. The measure also allows municipalities to ban or impose limits on the number of marijuana establishments within their boundaries.

Missouri Amendment Two legalizes the use of marijuana for medical purposes to treat a list of nine qualifying conditions. The amendment imposes a 4 percent tax on the sale of marijuana to be used for veterans programs, including healthcare, job training, and housing assistance. In addition to Amendment Two, Missourians voted on two other medical marijuana legalization measures, which both failed. Amendment Two passed by a wide margin, with over 65 percent of voters approving the measure.

Utah Proposition 2, which was favored by 53 percent of voters, legalizes the use of medical marijuana for patients with qualifying medical conditions. Under the measure, patients will be issued a state identification card and allowed to purchase two ounces of unprocessed marijuana or products with up to 10 grams of THC or cannabidiol every two weeks. The measure prohibits cardholders from smoking marijuana. And unlike the other measures that passed, Proposition 2 does not impose a tax on marijuana and will instead rely on business license fees to fund the program.

About half of medical marijuana laws and all but one of the nine recreational legalization measures were passed via voter-initiated ballot measures. Beginning in 2012 (Colorado & Washington), the passage of recreational legalization ballot measure has increased in each even-numbered election year: three in 2014 (Oregon, Alaska, & Washington, D.C.) and four in 2016 (California, Nevada, Massachusetts, and Maine).