Home
/
Insider
/
•••
Share
Over the past few years, the MultiState Insider has written extensively about the proliferation of state activity to enhance the collection of state and local sales and use taxes (see here, here, here, here, and here). Hanging over all of these discussions, however, was the question of whether the U.S. Supreme Court's decision in Quill v. North Dakota is still suited for the modern economy. To test this theory, South Dakota brought suit against a group of internet retailers in an effort to upend the current paradigm in a case called South Dakota v. Wayfair. The Court will hear arguments in this case on April 17, bringing us all one step closer to knowing the ultimate fate of Quill.

Decided in 1992, the Court in Quill ruled that the dormant Commerce Clause requires a retailer to have a sufficient physical connection with a state for that state to require the retailer to collect sales/use taxes. E-commerce, however, makes it easier for businesses to participate in state markets without any of the usual indicia of “substantial nexus” as articulated in Quill, such as stores, warehouses, distribution centers, or corporate offices. The result is that revenue from taxes which are due and payable are not being collected or remitted to states and local governments.

In the 26 years since Quill, states have been looking for ways to expand the meaning of “physical presence” (which the Court has not defined precisely) to extend sales tax collection responsibilities to additional retailers. These efforts have taken a variety of forms. Most of these laws fall under the general umbrella of “attributional nexus”: contending that the non-collecting retailer has nexus by virtue of the activities of another (attributing the nexus of another entity to the non-collecting retailer).

The most common early example was “affiliate nexus” laws, which require remote sellers to collect and remit tax if another affiliated legal entity had nexus in the state (e.g., a book store creates nexus for a separate but affiliated online book site). There were many different flavors of these laws (e.g., “drop ship" nexus).

States also enacted laws to attribute the activity of unrelated parties to non-collecting retailers. For example, if a retailer sold products with came with warranties, states would attribute nexus to the non-collecting retailer based on the activities of the unrelated warranty service company, who the states contend was acting as an agent on the non-collecting seller's behalf. The most widely discussed version of these “agency nexus” laws are the “click-through” nexus provisions. Under click-through nexus laws, states presume that a seller has nexus if it exceeds a certain sales threshold and if it receives online sales referrals from those in the state.

Nearly every state with a sales tax has enacted one or more of these types of provisions. 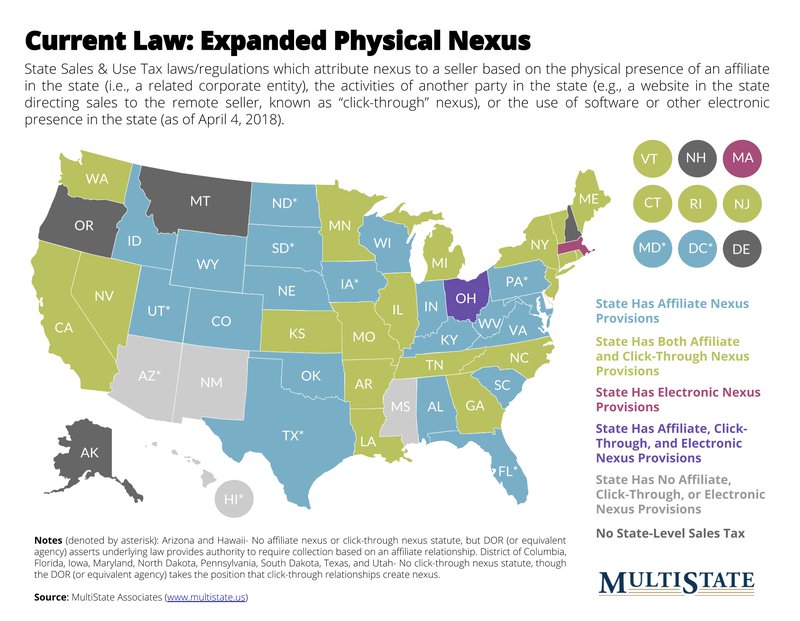 The state approach to this issue shifted dramatically in 2016, when South Dakota passed a law ( SB 106) intended to challenge Quill. Unlike previous efforts that sought to work within the Quill framework, the authors of the new South Dakota law were under no illusions that they were enacting a law that would pass constitutional muster - the purpose of the law was to test whether Quill remained good law. And the state didn't act without prompting: it was responding to an invitation from Justice Kennedy for the legal system to develop a case to test Quill.

The idea caught on like wildfire, rising from only a handful of similar bills in 2016 to nearly twenty in 2017 and 32 in 2018. Nearly half of all state sales tax nexus legislation in 2018 contained an economic nexus provision. 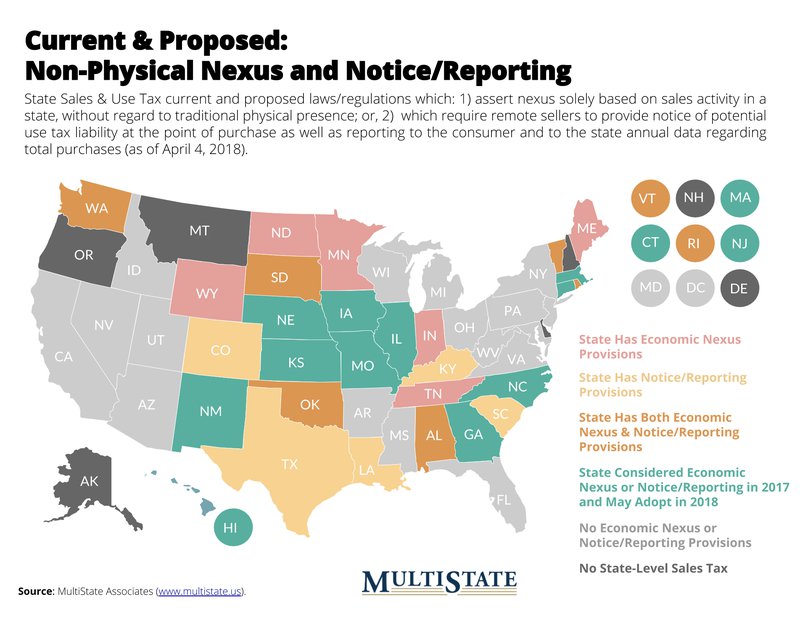 Although we can't be sure about how the Court will rule after their hearing, we can be confident that lawmakers in the vast majority of states are banking on the death of Quill and are setting up their states to capitalize on a new regime. The Court's decision will come down in the next few months.