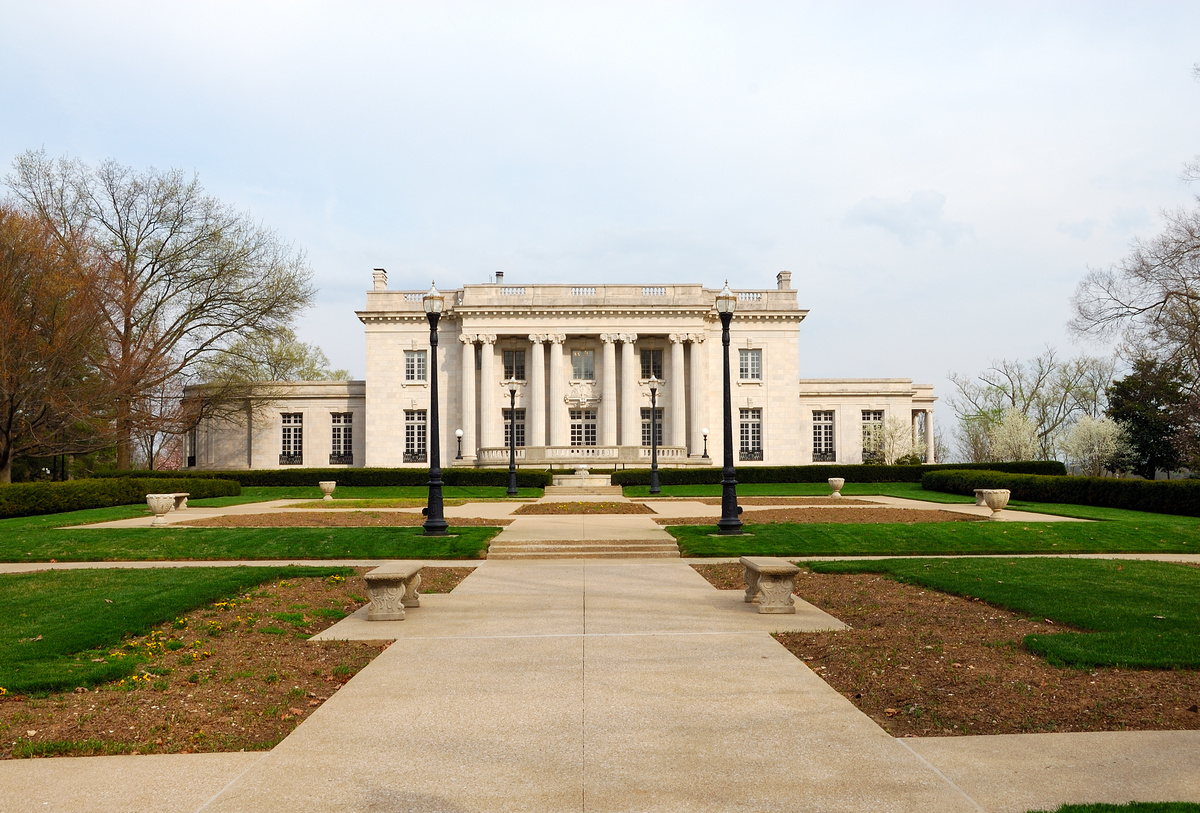 Odd-numbered years may be relatively quiet non-election years for Congress and most states, but four states — Louisiana, Mississippi, New Jersey, and Virginia — have state legislative elections this year and voters in Kentucky, Louisiana, and Mississippi will be electing governors. Voters in several states will also vote on statewide ballot measures.

Louisiana uses a unique open primary, or “jungle” primary election system, for local, state, and congressional elections in which all candidates compete regardless of party affiliation. If any candidate receives a majority of votes cast in the primary, that candidate wins the election outright. However, if no one receives a majority (more than 50 percent), then the top two candidates meet again in a runoff election. This year, Louisiana held its primary on October 12, with a runoff election slated for November 16.

Incumbent Governor John Bel Edwards (D) won the open primary, but grabbed just 47 percent of the vote and was unable to avoid a runoff. Republican businessman Eddie Rispone edged U.S. Rep. Ralph Abraham (R) for second place in the open primary, 27 percent to 24 percent, and won the right to try to unseat the incumbent governor in November.

Further down the ballot, Republican Lieutenant Governor Billy Nungesser easily won a second term with a 68 percent victory over his lone opponent in the October election, Democrat Willie Jones. Attorney General Jeff Landry (R) has also already won reelection after defeating his Democratic opponent with 66 percent support in the primary.

Incumbent Matt Bevin’s main opponent is Attorney General Andy Beshear (D), son of former Governor Steve Beshear. While Bevin holds the distinction of the least popular governor in the country (56 percent disapproval), Republicans have had a resurgence in the Bluegrass State after capturing a trifecta (governor’s mansion plus both chambers of the legislature) in 2015. Politicos have rated the race as a toss-up or leans Republican.

Initial polls following the primary vote show the incumbent, Governor John Bel Edwards (D), and challenger, Eddie Rispone (R), neck-and-neck in the gubernatorial race. A “We Ask America” survey published in the Baton Rouge Advocate on October 19 has both candidates receiving 47 percent heading into the final round of voting. President Trump held a rally for supporters in Lake Charles on the eve of the primary election to try to prevent Edwards from winning a second term outright and is expected to put out all the stops for Rispone in November to try to unseat Edwards, the lone Democratic governor currently serving in the Deep South.

Lieutenant Governor Tate Reeves (R) faces Attorney General Jim Hood (D) on November 5 to replace termed-limited Governor Phil Bryant (R). Political oddsmakers deem the Mississippi gubernatorial race as leans Republican. According to election laws in Mississippi, a candidate must secure both a majority of the popular vote as well as a majority of the state’s 122 state house districts in order to win the general election. If neither candidate secures both requirements, then the Mississippi House of Representatives will select the winner. Republicans currently control a 74 to 44 seat majority in the state house.

In 2016, Democrats made a dent in the decade long domination of state legislative seats held by Republicans. Democrats hope to continue that trend in the 538 seats in four states up for election in 2019.

Needing to add just one seat this election season in order to reach a supermajority in the state senate, Republicans have already done so even before a November runoff. Republicans controlled the upper chamber 25 seats to 14 last year, one short of senate supermajority. In the state house, Republicans entered election season with 61 seats in the 105-seat chamber and were looking to add nine seats to their total to reach the two-thirds (70 seats) necessary for a supermajority. After the October 12 primary, the GOP needs to unseat two incumbents in runoff elections, having already won 68 seats.

Even if he wins reelection in November, which is far from guaranteed, Governor John Bel Edwards (D) could very well be dealing with a GOP supermajority in both chambers in 2020 with the power to overturn his vetoes.

Republicans currently control both the state senate (31 seats to 18) and the state house (74 seats to 44) in Mississippi. Democrats will try to make some inroads to cut down on the Republican majority in both chambers, but the Republican control of the legislature is likely safe.

Virginia is home to what most predict will be the most interesting state legislative races in 2019. Republicans currently hold a narrow majority in both the state senate (20 seats to 19, with one seat vacant) and the state house (51 seats to 48, with one seat vacant). In 2017, Democrats flipped 15 seats in the Virginia House of Delegates, and Virginia Democrats hope they can continue this momentum in 2019 and pick up the two seats needed in both the house and senate, which would provide them with a Democratic trifecta in Virginia. Republicans will try to hold on to their thin majorities in the state legislature in order to continue keeping Governor Ralph Northan (D) at bay.

Betting on sports will be legal in Colorado if voters approve Proposition DD on November 5. This legislatively-referred ballot measure would allow casinos in the state to offer in-person sports betting and online through licensed operators. Approval of the measure would also provide up to $29 million annually for water projects in the state via a 10 percent tax on sports betting proceeds. Due to Colorado’s Taxpayer Bill of Rights (TABOR), any measure creating a new tax must be approved by voters, hence the need for voter approval after Governor Jared Polis (D) signed implementing legislation in May (CO HB 1327).

Texas Proposition 4: Prohibiting the Imposition of a State Income Tax

Texas is currently one of only seven states without a state income tax. Proposition 4 would enshrine this tax-free status in the Texas Constitution and make it much more difficult for the  Lone Star State to ever join the other 43 states that tax personal incomes.  The amendment was referred to the ballot by state lawmakers in 2019, and, if passed, would force future lawmakers to pass a constitutional amendment (requiring a two-thirds majority in both chambers) and win voter approval in order to impose a state income tax.

Voters in Washington will decide whether to curtail the state’s user-fee model for funding transportation infrastructure by lowering and capping annual vehicle fees in the state. If passed, I-976 would repeal the state’s recent $150 fee on electric vehicles (a growing trend) as well as small local transportation fees and cap all annual license fees for vehicles to $30. Opponents argue that a $30 cap on vehicle fees will tie lawmakers' hands when it comes to finding revenue to invest in transportation infrastructure and put more pressure on unpopular gas taxes as well as pulling in more non-user-fee general funds.

How Do the Gubernatorial and Legislative Elections Impact State Partisan Control Maps?

Since it’s an odd-numbered year, there aren't enough state elections to really shift overall partisan control we see on the maps below. Currently (pre-election), the gubernatorial map is tipped in favor of Republicans, with 27 Republican governors and 23 Democratic governors. Of the three states with gubernatorial elections — Kentucky, Louisiana, and Mississippi, all three would need to end up going blue to tip the map in favor of Democrats — a seemingly unlikely prospect. If politicos’ predictions are correct, the post-election gubernatorial map will likely still favor Republicans (see gubernatorial map below). 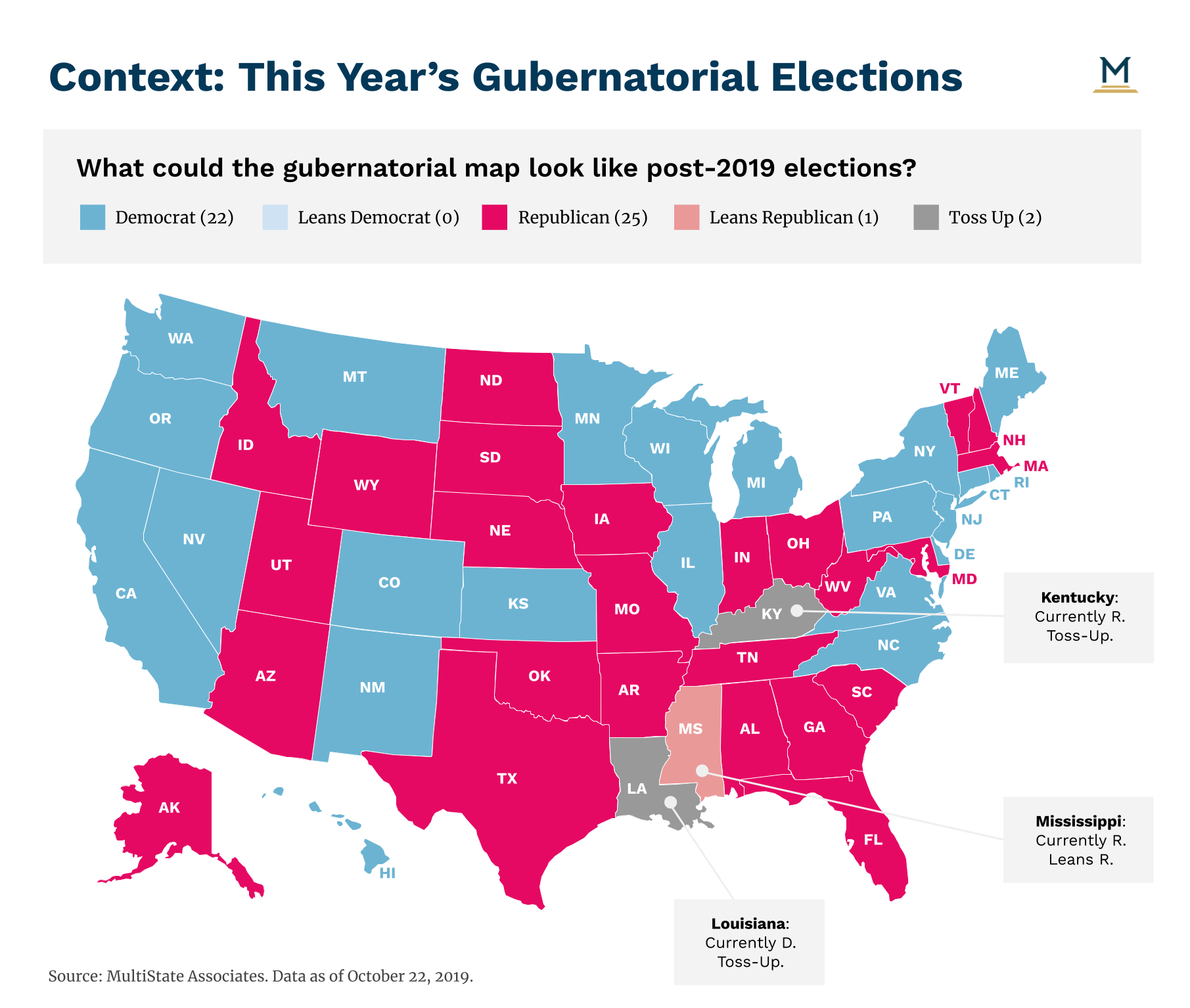 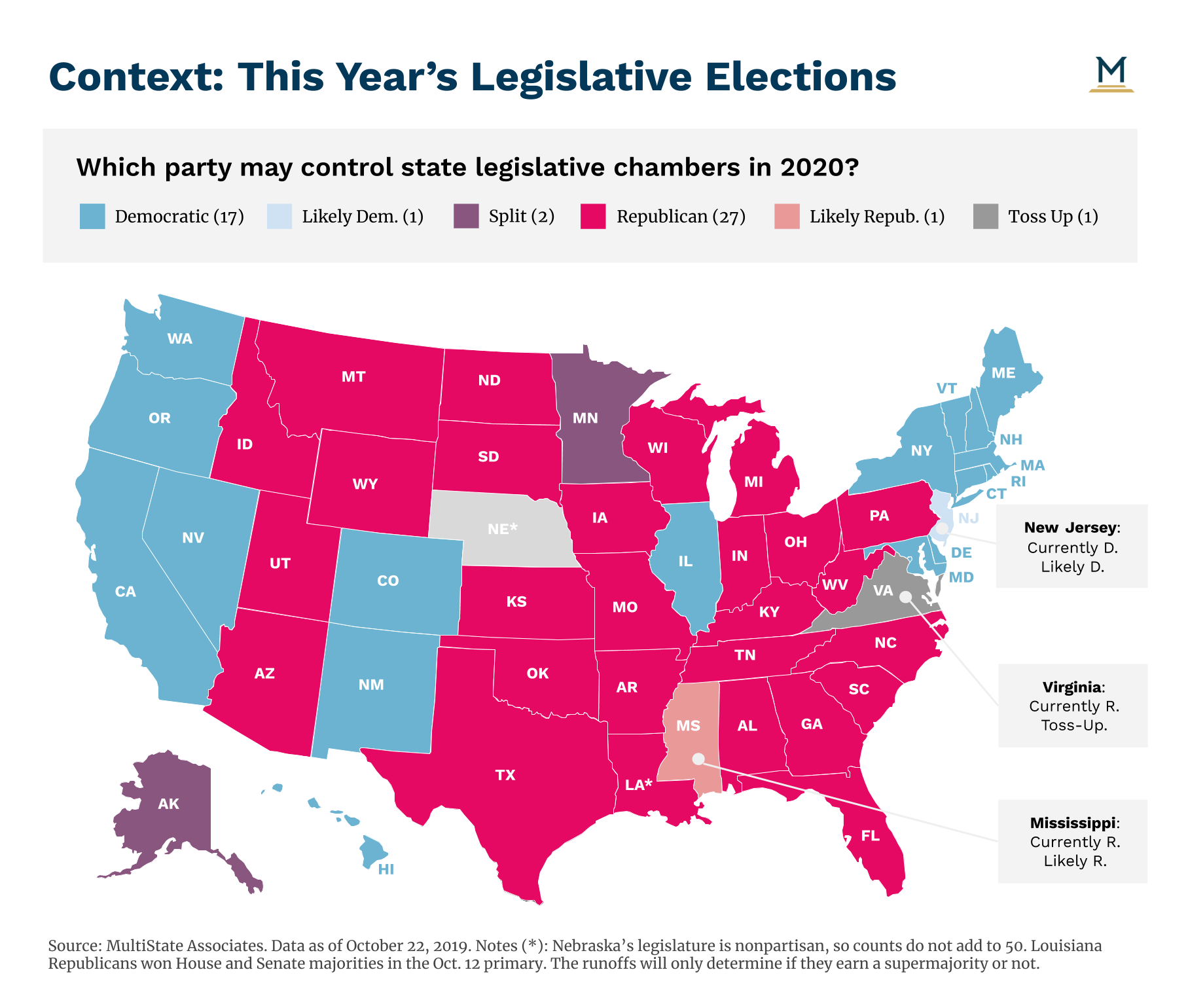 Campaign Finance Disclosure Deadlines in November (Reports Due in 34 States)