More than 20 governors listed transportation funding and reform as a priority in their 2019 State of the State addresses. Yet as state leaders increasingly look to improve the condition of their roads and bridges, states are raising less revenue from gas taxes, one of the primary sources of funding in most states for infrastructure investment. This negative trend is a consequence of improved fuel efficiency and increased demand for electric and hybrid vehicles. In addition to raising gas taxes, states are turning to a small but growing new source of revenue: fees on electric vehicles (EVs) and hybrids, which proponents claim are needed to ensure that drivers of those vehicles contribute their share to road maintenance.

States are increasingly implementing these fees, which range from $30 to $225 and are generally imposed annually. In 2012, only Missouri and Nebraska charged EVs additional fees. When we last reported on this trend in 2017, that list had grown to 17 states. Today, there are 28 states charging fees on electric or hybrid vehicles to fund road maintenance. In 17 states, fees apply on both electric and hybrid vehicles, and in 11 states, fees apply to EVs only.

Thus far, the states adopting these fees have been concentrated in the South, Midwest, Mountain West, and West Coast, with the Southwest (Nevada, Arizona, New Mexico, Texas) and Northeast (states north of D.C.) noticeably absent from the list of adoptees. 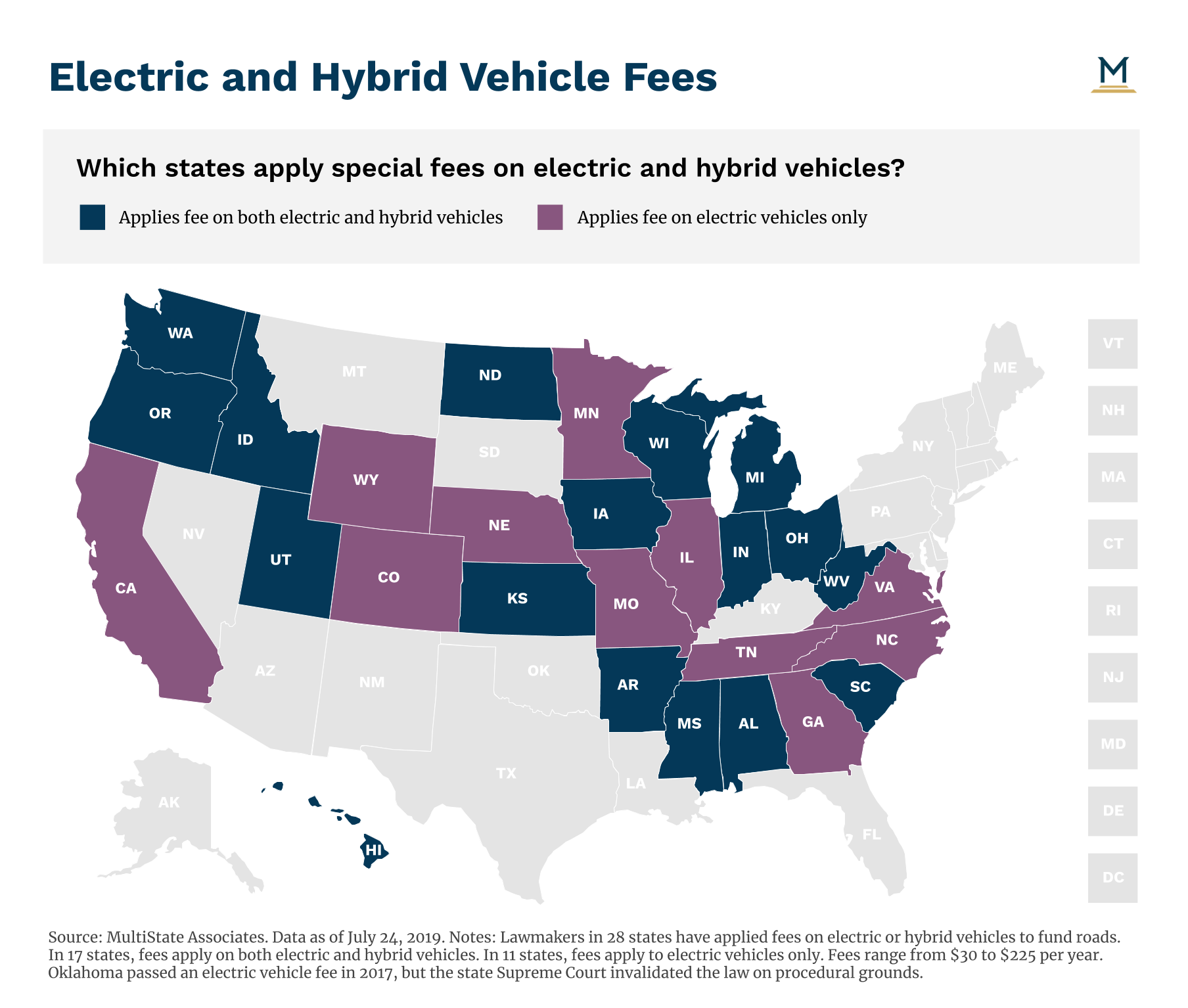 In March, Arkansas and Alabama enacted legislation (AR SB 336 and AL HB 2) addressing this issue, both imposing a $200 annual fee for EVs and a $100 fee on hybrid vehicles. The following month, Ohio Governor Mike DeWine (R) signed into law an identical tax on electric and hybrid vehicles (OH HB 62), while North Dakota adopted a law (ND SB 2061) that implemented a more modest annual fee of $120 on EVs, $50 on hybrids, and $20 on electric motorcycles. Also in April, Kansas Governor Laura Kelly (D) approved a measure (KS HB 2214) to enact a $100 fee on EVs and $50 fee on hybrids, effective at the beginning of next year.

From May through June, three more states approved taxes on electric and hybrid vehicles. Iowa Governor Kim Reynolds (R) signed a fee into law (IA HF 767) that gradually increases over time, starting at $65 a year for EVs and $32.50 a year for hybrids until December 31, 2020 and escalating up to $130 and $65 for EVs and hybrids respectively after January 1, 2022. In Illinois, Governor J. B. Pritzker (D) signed into law a bill (IL SB 1939) that imposes a registration fee for EVs that is $100 more than the fee for gas-fueled motor vehicles. In June, a bill (HI SB 409) to levy a $50 annual fee on EVs and hybrids became law in Hawaii without the governor’s signature, making the state the 28th adopter of some form of fee on electric and hybrid vehicles.

Two states this year, Washington and Wyoming, passed legislation increasing their fees on electric and hybrid vehicles, a trend that may become more popular in states with relatively low fees. Washington’s law (WA HB 2042) levies an additional $75 annual “electrification” fee on EVs and hybrids in addition to a registration fee, while Wyoming’s bill (WY HB 166) increases the original $50 registration fee on EVs to $200.

Critics argue that states should be encouraging consumers to purchase environmentally friendly vehicles and applying a new fee could dissuade them from choosing an electric or hybrid option. Others argue that the annual fees are relatively small in a market where starting prices for new EVs are $30,000 and up. When state and federal tax credits and savings at the pump are factored in (there's still a $7,500 federal income tax credit for purchasing EVs, while state credits are becoming more rare), annual fees for road maintenance may not be enough to dissuade consumers in the market for an EV. If, and when, that becomes the case, it'll mean that electric cars have become established in the industry and more than just a niche for environmentally-conscious buyers.

As states continue to search for stable revenue to maintain and invest in new transportation infrastructure, new fees on electric and hybrid vehicles have become part of the standard package in addition to raising state gas tax rates. Although the number of hybrid and electric vehicles on the roads is still small and revenues from these fees are not substantial, the sales for these green and fuel-efficient cars are expected to continue to grow rapidly as the technology improves.