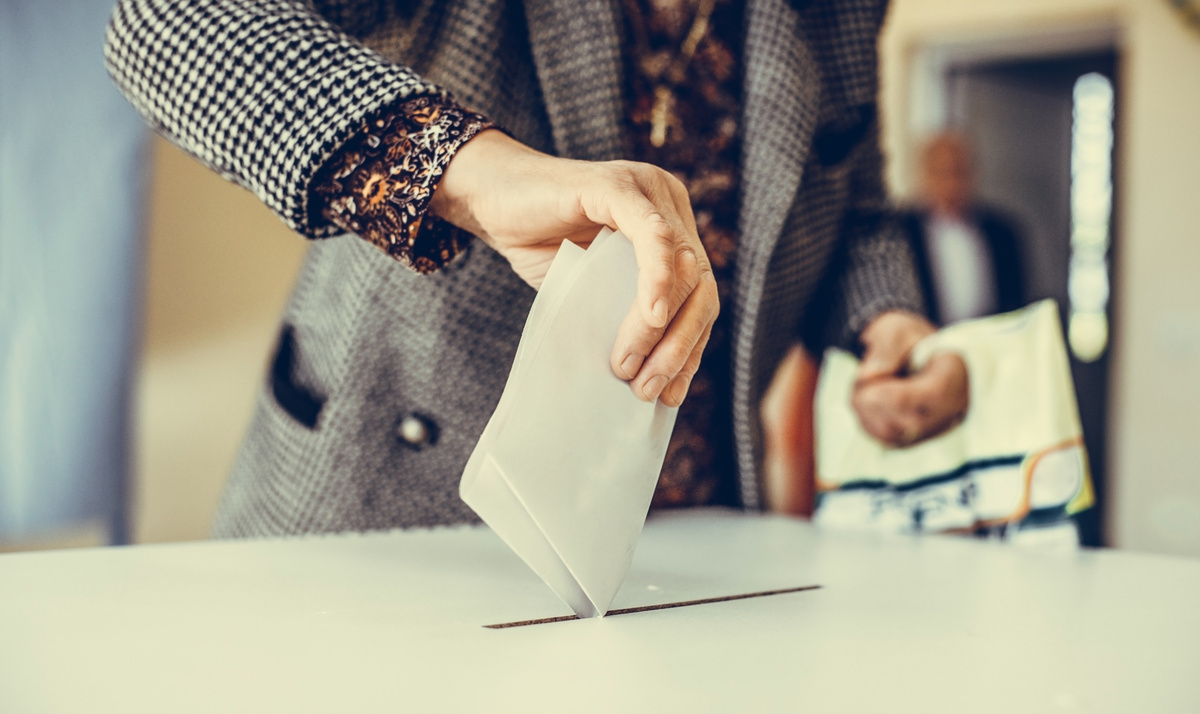 Democrats continued to chip away at the GOP’s dominance of state politics last night. The big wins were in the Kentucky governor’s race and Virginia legislative contests. However, with only two governor’s mansions and one flippable state legislature up for grabs, the partisan change across the country was limited. 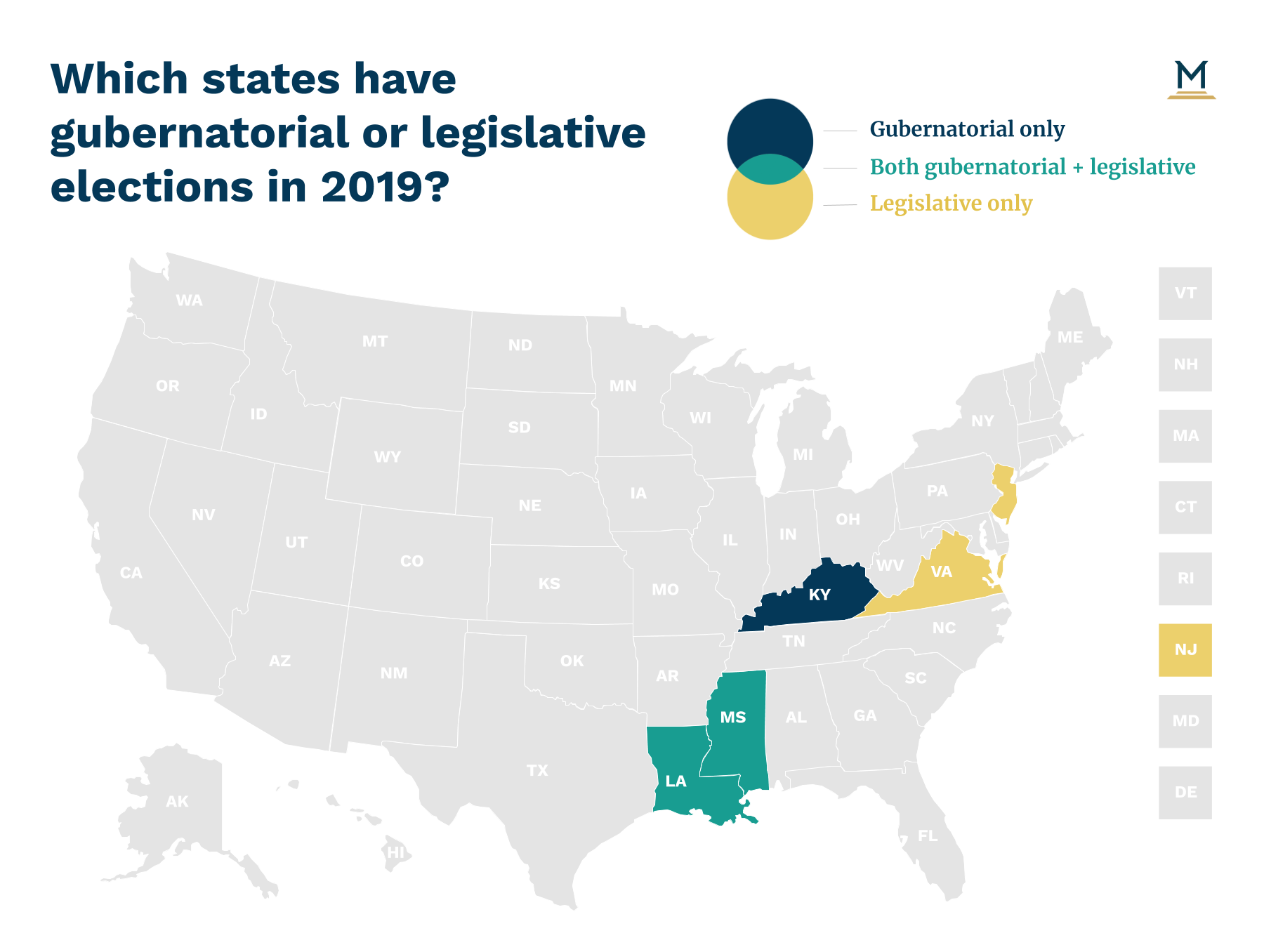 The biggest headline of the night was Democrat Andy Beshear’s defeat of Republican incumbent Governor Matt Bevin in Kentucky. While Bevin sported the lowest approval rating of any governor, President Trump won the bluegrass state by 30 points in 2016. The GOP had no problem sweeping the down-ballot statewide offices last night, including Daniel Cameron (R) replacing Beshear as Attorney General. Politicos will debate whether these results indicate a wider problem for Republicans nationwide under Trump or local voters reacting to a uniquely unpopular incumbent governor.

The race is extremely close as Beshear edged Bevin by only 5,000 out of 1.4 million votes. Governor Bevin has yet to concede and the AP has deemed the race "too close to call" as of election night. The loss would forfeit the Republicans' fresh trifecta in Kentucky.

For the first time since 1993, Democrats will control both chambers of the Virginia General Assembly as well as the governor’s mansion in 2020. After making up huge ground by flipping 15 seats in the Virginia House of Delegates in 2017, Democrats finished the job this year by flipping narrow Republican majorities in both the state house and senate. Governor Ralph Northam (D) will oversee a Democratic trifecta in the Old Dominion for the first time in over two decades.

While most of the punditry will focus on Bevin’s loss in Kentucky, the Democratic trifecta in Virginia promises the biggest policy shifts after last night’s results. Democrats will now have the votes to move on gun control issues, lift restrictions on recent Medicaid expansion, increase the state’s minimum wage, and will control the redistricting process.

Members of the New Jersey House  were up for election last night, and to no one’s surprise, Democrats will hold on to solid control of the legislative chamber in 2020. However, Republicans will have picked up a couple of seats in the chamber for 2020.

While the gubernatorial race in Kentucky was rated a toss-up, most political forecasters saw the open governor’s race in Mississippi as Republican-leaning. The Democratic wins hit a roadblock as the elections moved south. Lieutenant Governor Tate Reeves (R) defeated Attorney General Jim Hood (D) to replace termed-limited Governor Phil Bryant (R). Down ballot, Republicans kept their solid majorities in the Mississippi Legislature and won all seven statewide offices on the ballot last night.

While Kentucky is a fairly recent state to turn from blue to red, Mississippi has remained solidly conservative for many years. And unlike Virginia and Kentucky last night, where turnout was beyond expectations, the Mississippi voters turned out in lower than expected numbers last night.

Because of Louisiana’s unique open primary electoral system, Republican’s already locked up most of the statewide offices as well as control over the state legislature by securing a majority of votes cast in the state’s October 12 primary.

If Eddie Rispone is able to defeat the incumbent governor next week, Republicans will secure a trifecta in Louisiana and help make up for the lost ground in Kentucky and Virginia last night.

Democrats had a good night, but the stakes were low with only two governor’s races and one legislature within reach of flipping. Democrats gained one trifecta in Virginia by flipping both chambers of the state legislature and knocked off a sitting Republican governor in Kentucky. But in 2020, Republicans will still control state legislatures in 29 states, while Democrats will have legislative control in only 19 states. Over the past few years, Democrats have gained ground in gubernatorial seats across the country, but there will still be at least 26 Republican governors. The only race still pending is that of Louisiana Governor John Bel Edwards (D), which will take place on November 16. If Bel Edwards is able to hang on and serve a second term in Louisiana, the gubernatorial count will be 26 Republicans and 24 Democrats in 2020. If challenger Eddie Rispone (R) prevails next week, Republicans will have negated a nationwide shift in gubernatorial partisan control for 2019. Overall, Republicans will still command at least a 21 to 15 state lead in state trifectas in 2020.

Everyone will now look towards November 2020. Democrats will want to take advantage of a presidential election year to continue their momentum in the states, while Republicans will want to turn things around and potentially expand their nationwide lead in the states next year. 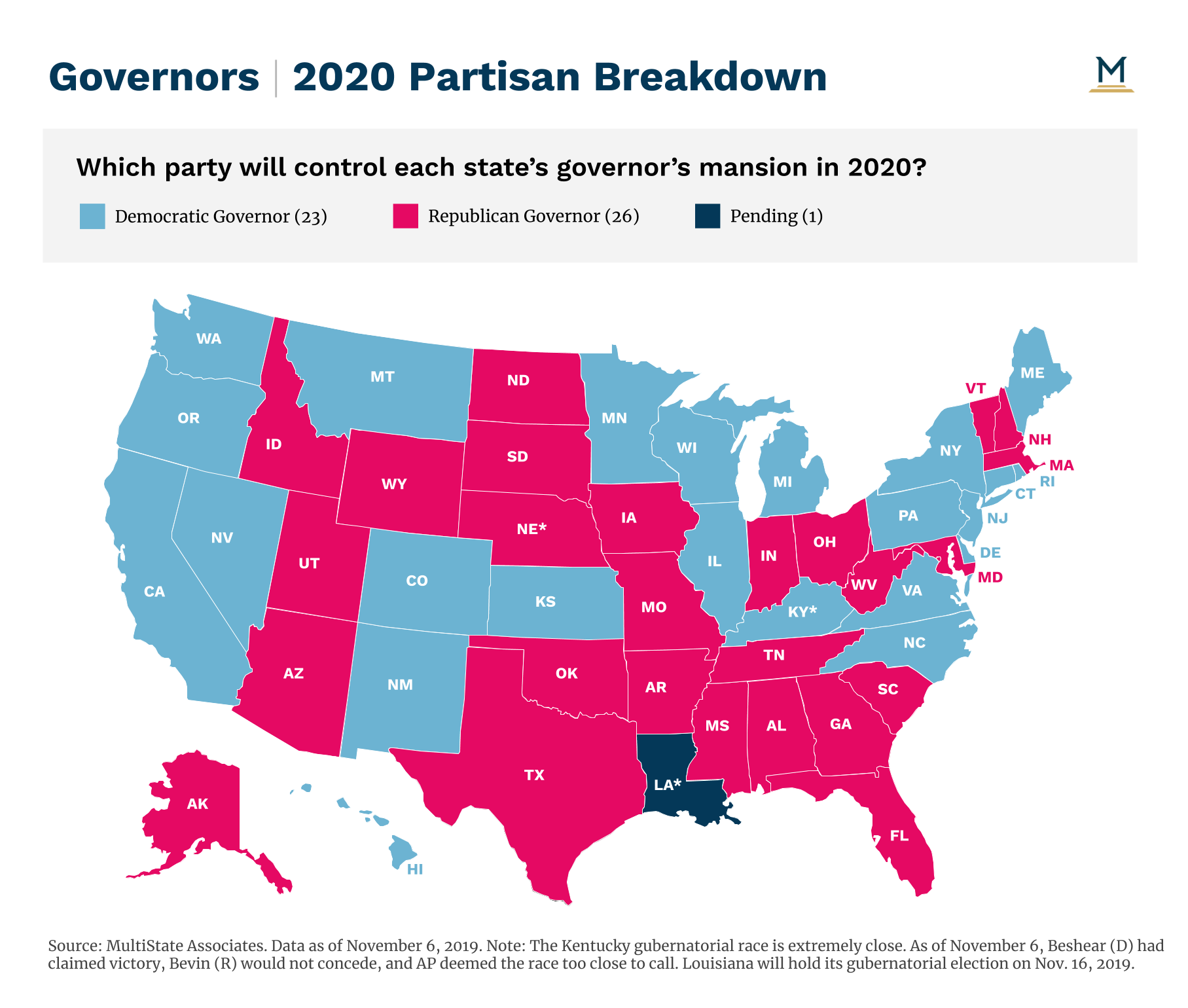 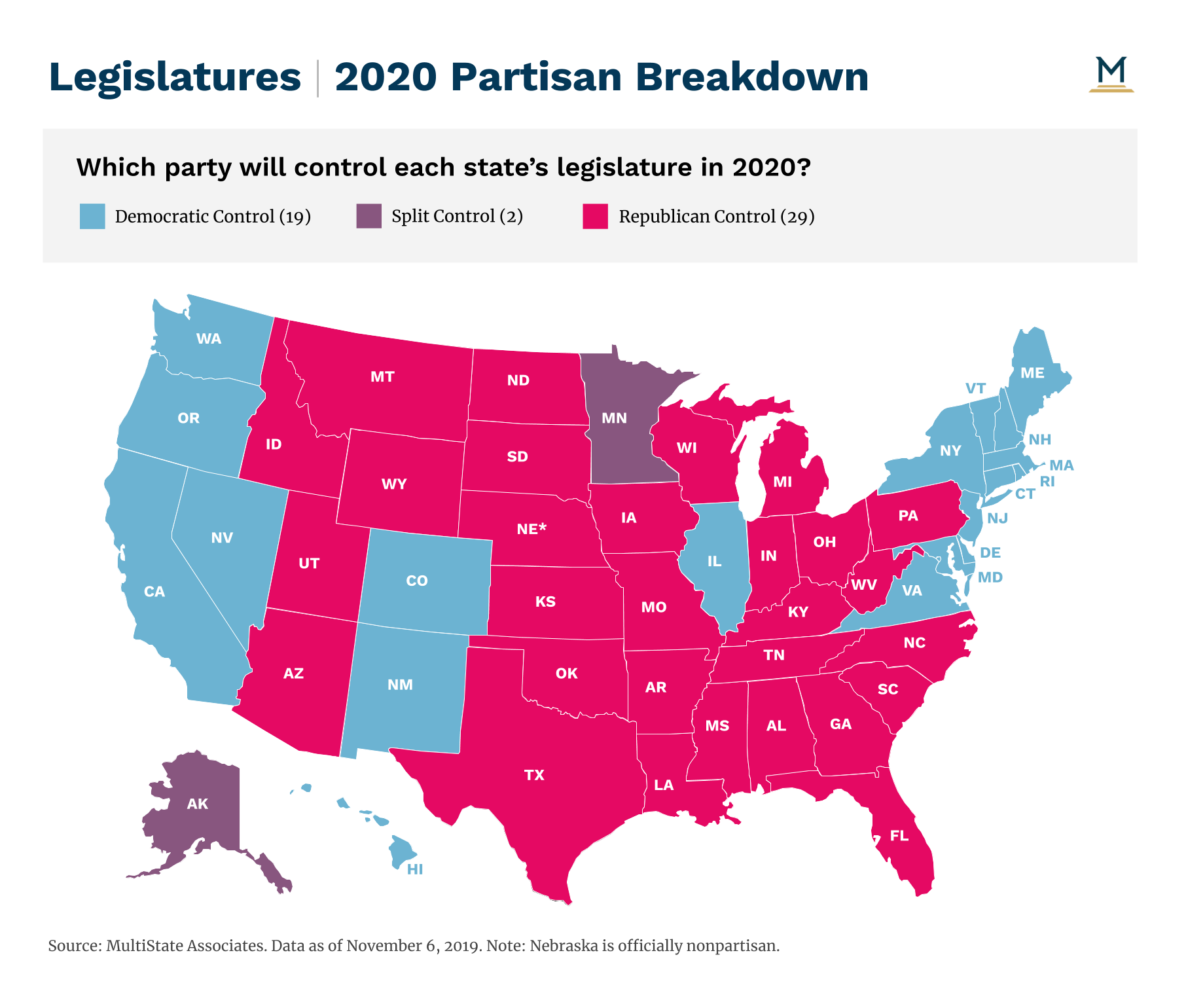 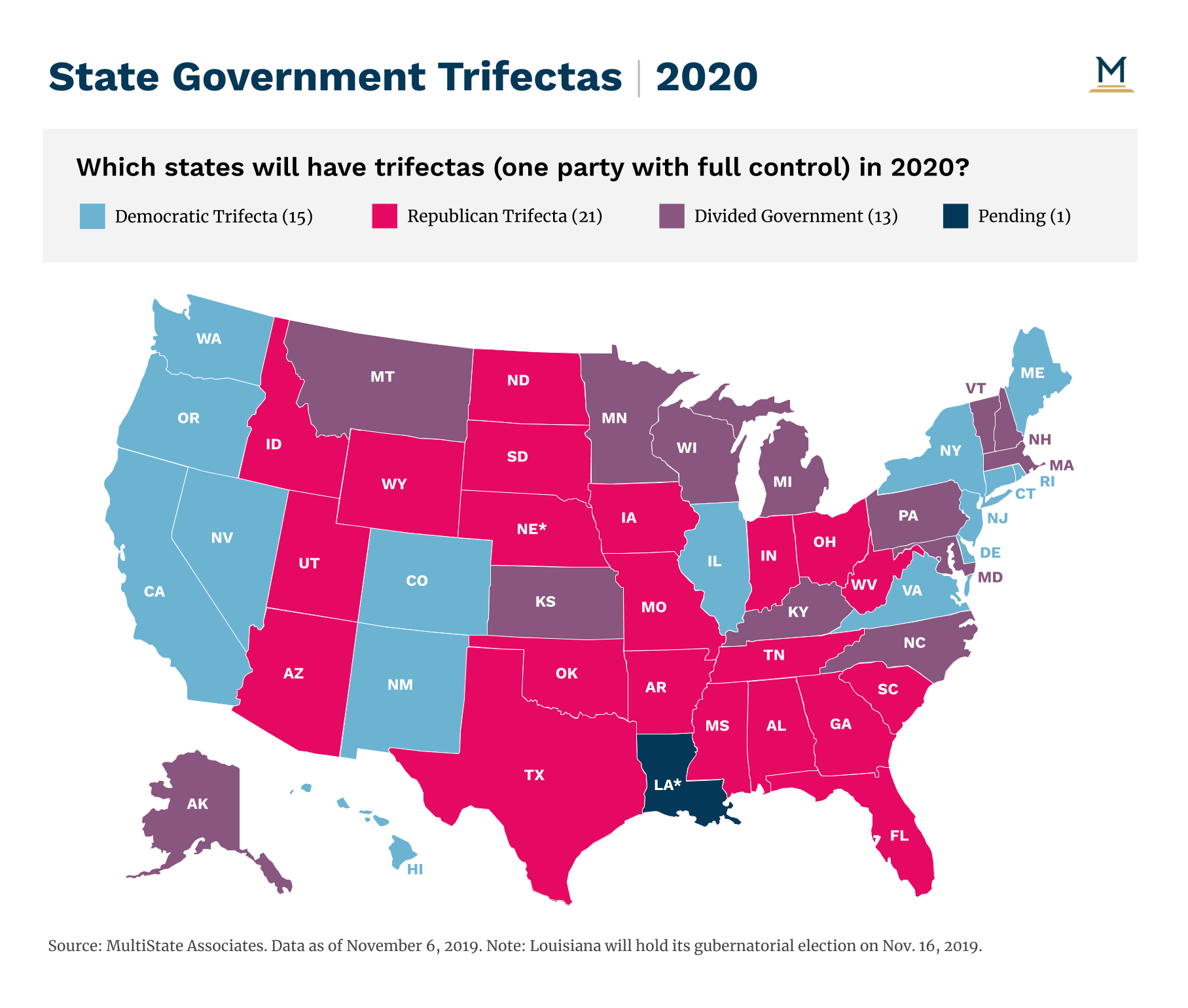