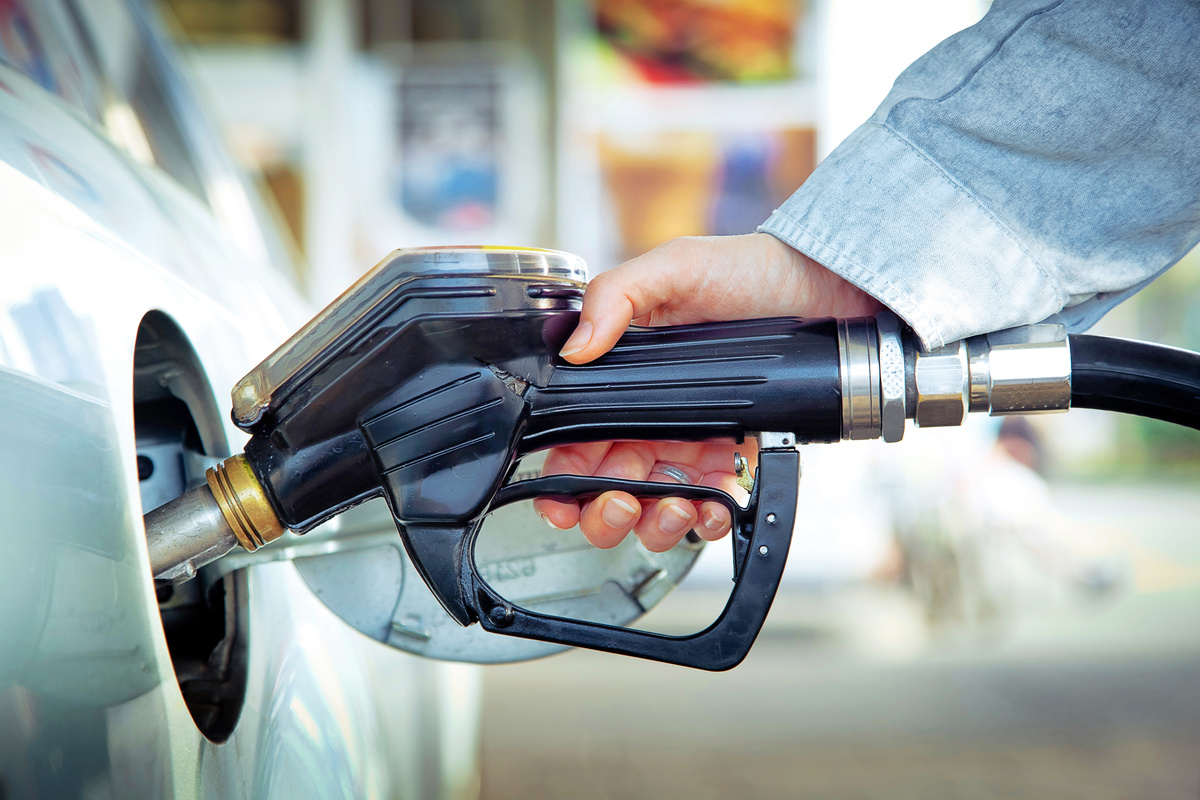 After Alabama became the first state to approve a gas tax increase in 2019, we asked how many states would follow its lead and raise new revenue for investments in state transportation infrastructure in 2019. So far, two additional states, Arkansas and Ohio, have raised their gas taxes this year, and a third state, Virginia, has raised the gas tax for a region of the state to pay for a specific project.

As we’ve reported previously, non-election years are a popular time to raise new revenue for transportation infrastructure investments. In 2017, our most recent non-election year for most states, seven states passed substantial road funding measures. Although the Trump Administration and Congress have yet to deliver on a promised injection of infrastructure funding, over half the states — 28 in total now — have raised fuel tax rates since 2013 to invest in roads and bridges.

In March, Governor Kay Ivey (R) signed the “Rebuild Alabama Act” (AL HB 2) into law, which will increase the state’s fuel tax by 10-cents-per-gallon. Under the new law, once the increase is phased in over three years, the state’s gas tax will become indexed to the National Highway Construction Cost.

The same month, Arkansas Governor Asa Hutchinson (R) signed legislation (AR SB 336) to raise fuel excise taxes by 3 cents-per-gallon on gasoline and 6 cents-per-gallon on diesel, as well as levy a wholesale sales tax on fuel in the state, effective in October. A variable rate formula will apply a 1.6 percent and 2.9 percent sales tax on the wholesale price of gas and diesel fuel, respectively. Additional funding will come from taxes on casino revenue in the state and an annual registration fee on electric and hybrid vehicles of $200 and $100, respectively. The measure is expected to raise an additional $95 million each year for the state’s roads and bridges.

Separately, Arkansas lawmakers placed a measure on the 2020 ballot (AR HJR 1018) that will continue a half-cent sales tax increase that was originally approved by voters in 2010 and is set to expire at the end of next year.

In April, Ohio Governor Mike DeWine (R) signed a fuel tax increase (OH HB 62) — 10.5 cents-per-gallon for gasoline and 19 cents-per-gallon for diesel — into law, effective in July. This substantial increase is less than the governor originally sought from lawmakers and didn’t include indexing the rate to inflation, but the increase is expected to bring in $865 million in additional revenue each year. Similar to Arkansas and Alabama this year, the law will impose a new annual fee on electric and hybrid vehicles of $200 and $100, respectively.

The same month, Virginia Governor Ralph Northam (D) signed into law legislation (VA SB 1716) to raise revenue for investments to improve the I-81 highway through the state. The law imposes an additional 2.1 percent tax increase on the wholesale price of gasoline in districts along the 325-mile I-81 corridor, which is estimated to raise gas prices around 7-cents-per-gallon in those districts. A similar increase in diesel fuel taxes and higher fees for heavy truck registration will contribute to the I-81 Improvement Fund as well. 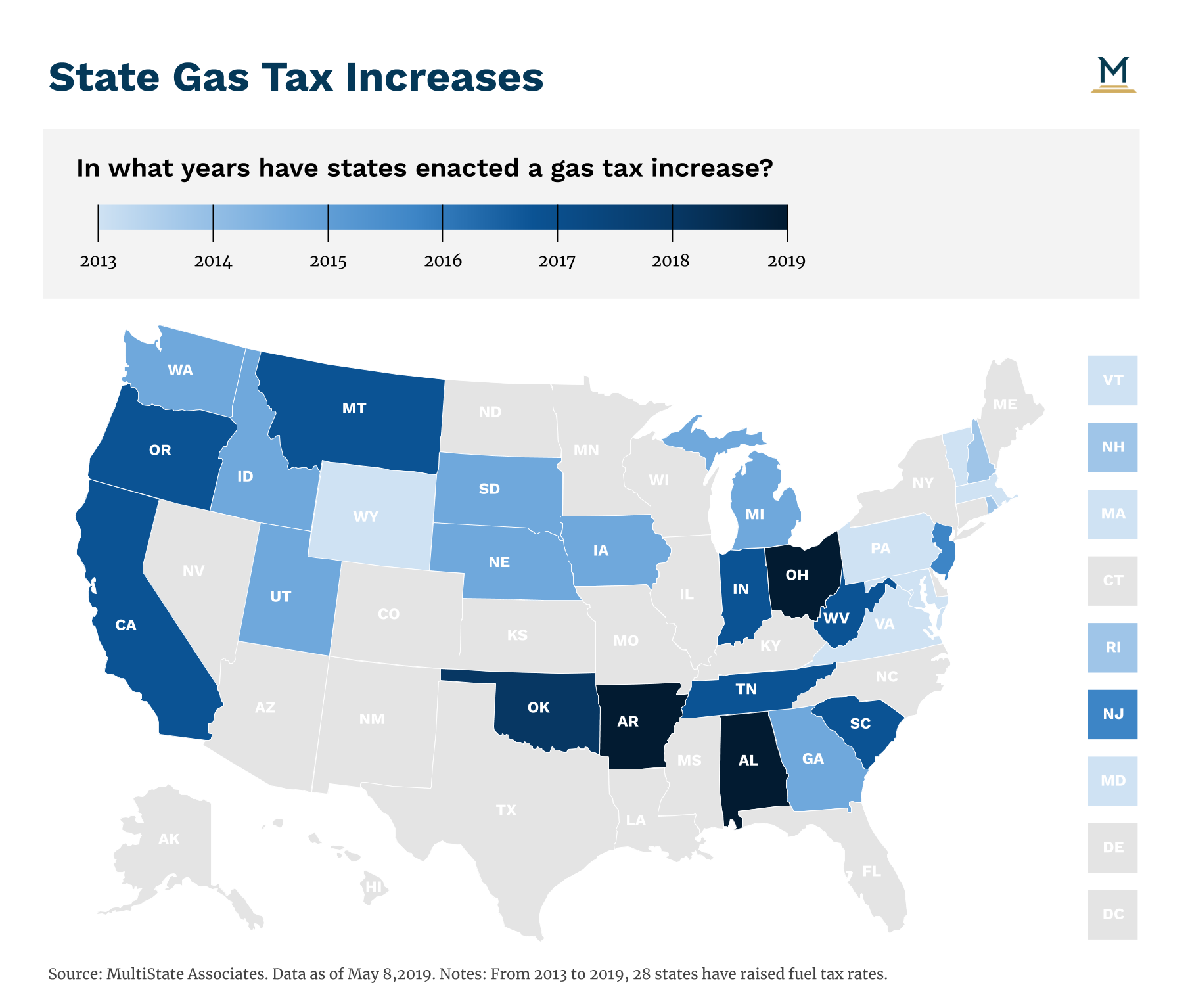 The Alabama, Arkansas, and Ohio measures follow the trend set by many other recent infrastructure funding measures that include a major increase in fuel taxes paired with new annual fees for electric or hybrid vehicles (a more recent trend). Virginia diverges from this trend because it passed a major statewide road funding measure in 2003, and this year’s project-specific legislation is a logical follow up to that action.

State lawmakers appear to have settled on a similar package of user-fee revenue raisers that Republicans, who still control most statehouses today, can embrace. Oklahoma lawmakers passed a small gas tax increase last year. In 2017, Montana, Indiana, West Virginia, Tennessee, and South Carolina joined liberal-leaning California and Oregon in hiking gas taxes to pay for investments in the states’ roads and bridges.