The impacts of the 2019 legislative session will be felt for years, but perhaps in no policy arena more than state tax and budget policy. With political power dynamics and ideologies shifting, states coming to terms with seismic new federal policies, and economists warning of a looming fiscal contraction, states were primed to act.

Now that the dust has mostly settled, we can look back and see that there were a few important trends amid the flurry of activity. Specifically, we identified two specific policy trends — on affecting corporate income tax and the other sales tax — and three macro-trends that influenced not only the 2019 legislative sessions but which we expect to play an increasingly important role moving forward.

The federal Tax Cuts and Jobs Act changed the tax landscape for states across the country following its passage in 2017. A year and a half later, states are still grappling with its implications for their own tax codes; however, the conformity focus shifted this year. Last year, from the corporate income tax perspective, states focused mainly on the repatriation transition tax, but in 2019, states focused largely on global intangible low-taxed income (GILTI).

Through both legislative and regulatory action, most states moved to exclude all or virtually all of GILTI (foreign income) from their tax bases this year. Currently, 23 states have decoupled from or exclude at least 95 percent of GILTI from the tax base, 14 have a deduction that may apply to GILTI or is less than a 95 percent exclusion, and only five states explicitly tax more than 50 percent of GILTI. Notably, several so-called “high tax” states like New York and Minnesota decoupled or decided to exclude a majority of GILTI. Others like Oregon affirmed that GILTI would be eligible for the state’s dividends received deduction.

Since the U.S. Supreme Court handed down its decision in South Dakota v. Wayfair states have been rushing to update their tax codes to capture new e-commerce revenues; but while legislators in 2018 were occupied with establishing economic nexus standards for internet retailers, lawmakers in 2019 worked quickly to construct tax structures for online marketplaces.

About this time last year, we wrote that in 2018 twelve states had considered 30 marketplace bills and that five had been adopted. In 2019, 40 states considered 104 marketplace bills and 35 states have enacted marketplace provisions. This roster could expand even further this year if North Carolina Governor Roy Cooper (D) North Carolina decides to sign off on a marketplace bill that his legislature already passed (HB 966). Furthermore, Georgia, Kansas, and Missouri all had popular legislative support for these bills, but their efforts died in the face of political happenstance, rather than fundamental policy disagreements.

That states have acted so quickly and decisively goes to prove that the argument over internet sales tax collection is essentially over: a few states may defy the convention and a few more may take their time passing their legislation (I’m looking at you, Florida), but lawmakers on both sides of the aisle are in agreement that legally due and payable sales taxes should be collected by the seller (or marketplace), regardless of where the seller (or marketplace) is physically located.

One important caveat: while the vast majority of states have enacted marketplace regimes, we shouldn’t expect this issue to go away. Intuitively lawmakers are clear on the idea that marketplaces should be required to collect sales tax, but with a shifting retail landscape, technical amendments and tweaks are inevitable. 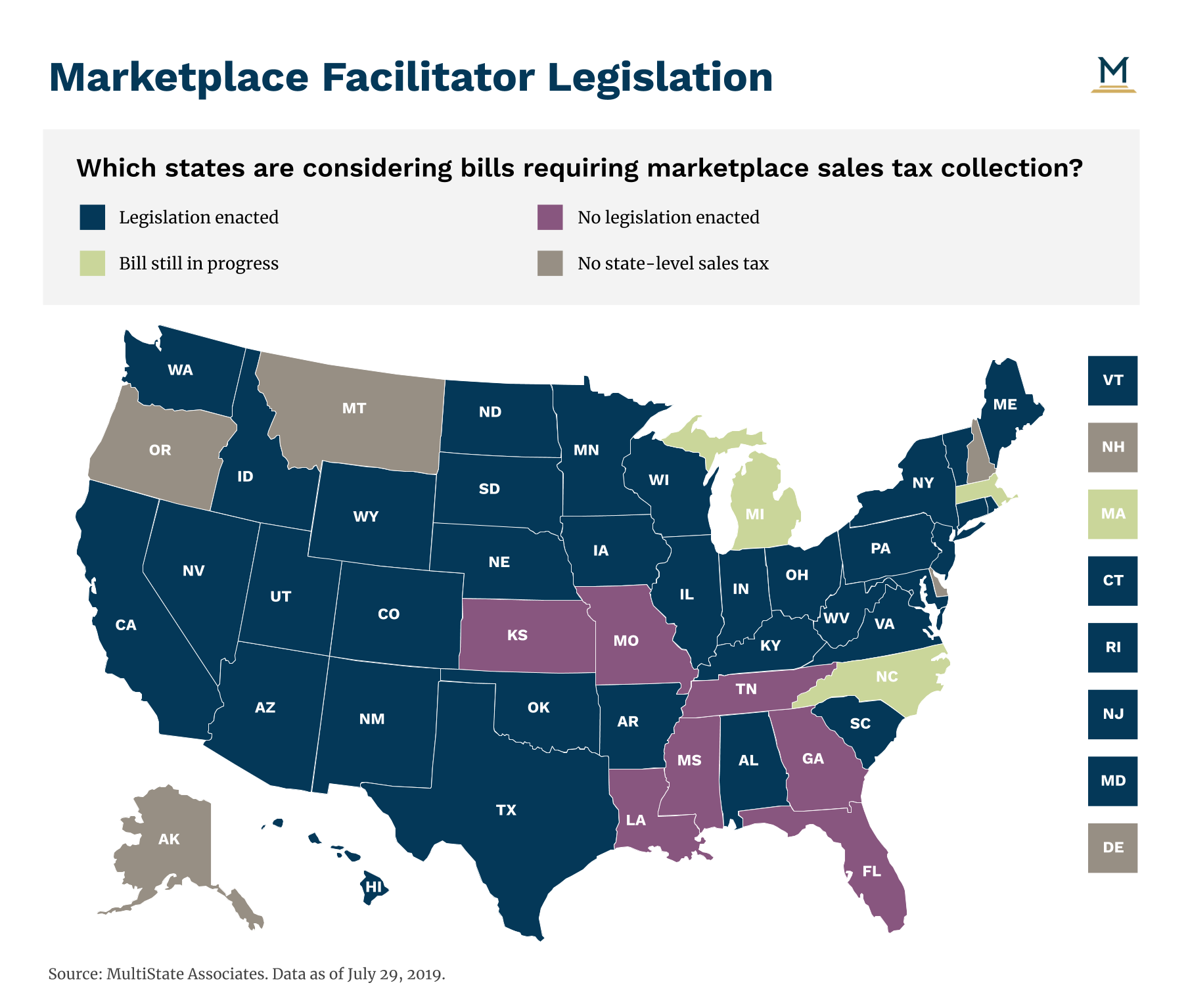 With the Democratic party drifting further left and eroding Republicans’ decade-long primacy in state legislatures, it isn’t surprising that progressive lawmakers started throwing their weight around in 2019.

Oregon is a prime example of this leftward push. Democrats, in an effort to drum up more money for education, have attempted repeatedly over the last few years to pass a gross receipts tax aimed at the state’s biggest businesses but were unsuccessful both at the ballot box and in the legislature. In the 2018 elections, however, progressives were able to achieve the three-fifths supermajority necessary to pass tax legislation without Republican assistance. With their new political power as leverage lawmakers were able to gain the buy-in (or at least neutrality) of important figures in the business community and passed a new gross receipts tax despite a walkout from some Republican members. The bill, which proponents hope will bring in over a billion dollars annually to state coffers, will not only transform Oregon’s fiscal landscape, it could entice other blue states to consider a similar tax as a salve for their own revenue shortfalls. Oregon becomes the first state to impose a gross receipts tax and a corporate income tax on business at the same time. (Technically, Ohio did this more than a decade ago as it was phasing in its gross receipts tax and phasing out its corporate income tax, but the actions were linked and the overall tax package was a tax cut.)

While progressives have had big political victories this year, evidence of their growing influence can also be seen in some of their failures. A millionaire’s tax had been on New Jersey Democrats’ political radar for years, and Governor Phil Murphy (D) made a concerted push despite opposition from more centrist members of his party. New Hampshire’s Democratically-controlled legislature was not able to pass their payroll tax-funded paid family leave law in the face of opposition from Governor Chris Sununu (R), but the proposal got more support than it would have previously.

It isn’t surprising progressive Democrats moved aggressively on taxes, but 2019 also saw several Republican legislatures and governors propose bold and not always business-friendly tax bills this year. Whether driven by an attempt to “modernize” (which is taking over from “tax reform” as lawmakers’ go-to fiscal euphemism) their tax codes or by the emergent populist strain in the party, Republicans looked beyond tax cuts and simplification this year.

Wyoming provides the starkest example of this phenomenon. The Cowboy State’s economy has been tied to the energy sector for decades and lawmakers have been looking for a way to diversify their revenue portfolio. But in 2019 they came rushing out of the gate with proposals to tax wind energy, increase the sales tax rate, hike insurance premium taxes, levy a new corporate income tax, and expand the sales tax base to a host of new services. None of these bills made it to Governor Mark Gordon’s (R) desk, but proponents made passionate arguments about the need to protect Wyoming businesses against unfair competition from out-of-staters. Furthermore, while these bills didn’t gain traction this year, the legislature’s Joint Revenue Committee is continuing to give careful study to whether a new business tax is right for their states.

It’s also worth noting that the trend towards (failed) attempts to expand the sales tax base to services is manifesting predominantly in Republican states. Obviously lower rates with broader bases falls within the band of conservative tax orthodoxy, but in years past these efforts were usually a move of last resort in the face of an economic crisis or were curbed such that they would only affect a few enumerated personal services. So when Utah Governor Gary Herbert (R) calls for a base expansion to nearly all services and without the typical exemption for intercompany transactions, with a bill dropping to do so in the final weeks of the state’s legislative session, it highlights that something new is going on.

State Lawmakers are Still Mostly Getting their Work Done, Despite Polarization

If you asked the poor souls who are not deeply ensconced in the world of state fiscal policy what the big news from state legislatures had been this year, they probably would have talked about the heartbeat bills in Georgia and Louisiana, the Republican walkout in Oregon over a cap and trade proposal, or maybe efforts to legalize marijuana. Given the prominence of these news stories and the partisan drifting catalogued above, a reasonable person might assume that states are now exhibiting the same kind of political gridlock that afflicts the feds. However, while we are starting to see more hard-knuckled tactics being employed in state capitals, for the moment at least the parties are still usually able to reach the kind of compromises that elude Congress.

Minnesota has the only remaining split legislature in the country, but the sides were able to come together to get their budget in on time and pass federal tax conformity legislation, tasks that have been historically tricky for lawmakers in St. Paul. In rancorous Pennsylvania, where there is very little love lost between Governor Tom Wolf (R) and the GOP-controlled legislature, passed a budget that boosts education spending with only the usual levels of partisan grumbling. Indeed, currently, only four states (Alaska, Massachusetts, Michigan, and North Carolina) still have not passed their budgets for this year — and none of them are “shut down” as a consequence, having provisions in place to keep the government operating while budgets are finalized.

This is not to say that the process of finalizing a budget can’t still be messy: Wisconsin only finished up their budget work after Governor Tony Evers (D) employed a creative “Frankenstein veto” rather than execute an historic full veto; and North Carolina lawmakers are still engaged in a budgetary donnybrook over Medicaid expansion. But when it comes to meet their essential constitutional duty to pass a budget, lawmakers are doing pretty well all things considered.