What Did Governors Care About in 2019?

At the start of the 2019 legislative session, we analyzed this year’s gubernatorial priorities based on the issues each governor cited in their State of the State address (scroll down to see the chart). To find out what governors accomplished this year and what policy areas they focused on, we read every press release published on each governor’s official state website and noted the legislative accomplishments their administrations announced.

As we did earlier this year, we organized the accomplishments into eight broad policy areas: Budget & Taxes, Business, Education, Employment & Labor, Energy & Environment, Health & Wellness, Law & Legal, and Social Policy. The chart below shows the number of governors who published a press release on their official website about an accomplishment in each of the policy subareas. For example, 34 governors mentioned at least one accomplishment in the field of Education Funding & Reform in a press release.

Although most states are out of session — and most governors have taken action on all of their state’s outstanding bills — governors may continue to sign bills and rack up additional accomplishments in the eight states that remain in session. The data shown in the chart are current as of July 30, 2019.

At a time when the number of divided state governments is relatively low (14 states), governors followed through on the legislative priorities they named during their State of the State (STOTS) addresses. About half of governors took action on Education Funding & Reform, Transportation Funding & Reform, Tax Reform, Opioid Epidemic & Drug Policy, Health Care Costs & Reform, Criminal Justice Reform, Workforce Development and Environmental Policy, which were among the most-cited issues in SOTS addresses.

Governors tended to sign legislation or take action on issue areas they did not specifically mention in their SOTS addresses. For example, just four governors cited Agriculture as a priority in their annual address, but 21 governors published press releases touting agricultural accomplishments. Spurred on by the rapidly approaching 2020 Census, several governors on both sides of the aisle signed orders to create statewide Complete Count Committees, tallied in the Redistricting policy area of our chart. Several more governors signed legislation decreasing occupational licensing restrictions, which bolstered the Regulatory Reform policy category of our chart. 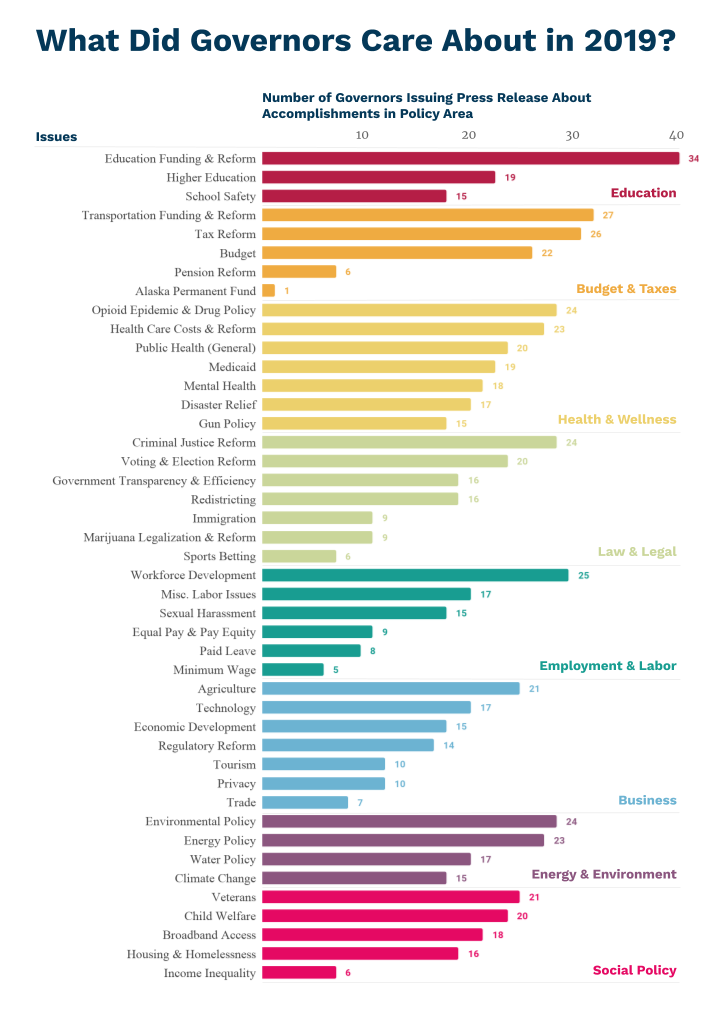