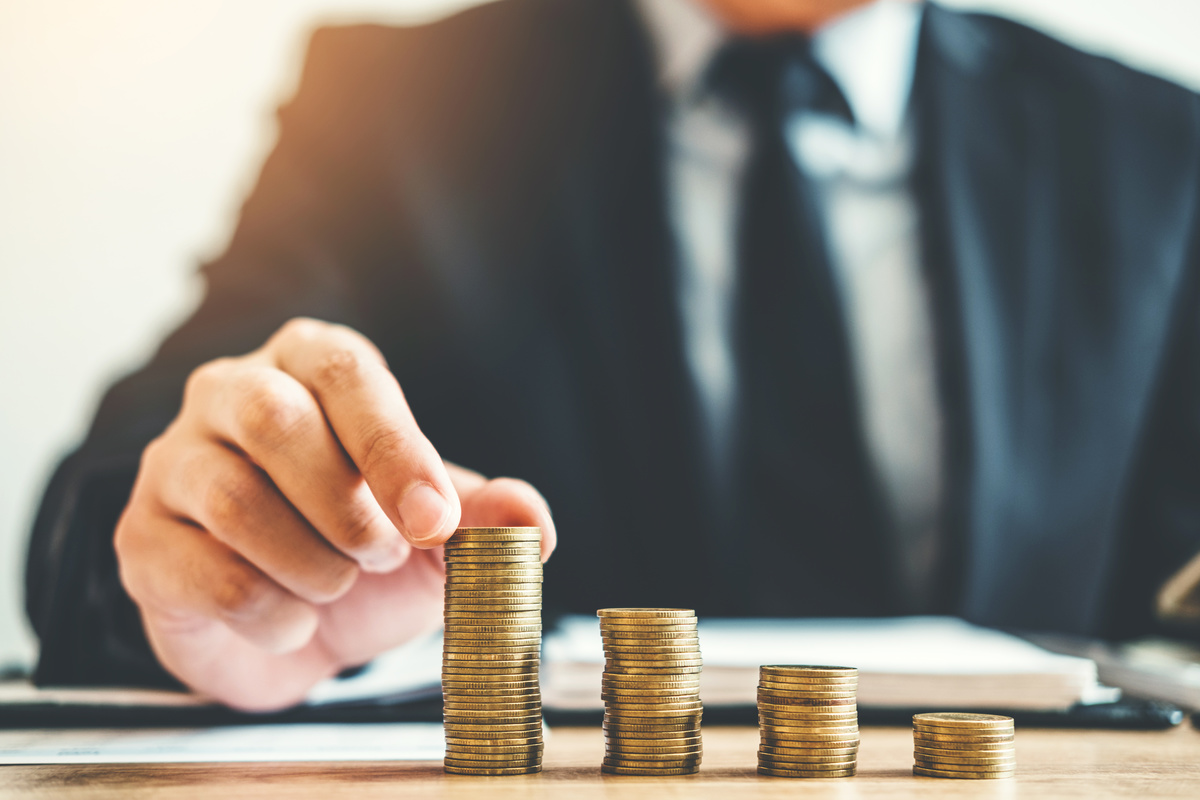 Despite warnings from state economists that revenues could begin slowing down in the near future, state budgets remain strong in 2020 with only five states confirmed to be in significant deficit. This is down slightly from the number of states that were in deficit last year and is nowhere near the peaks of 2017 and 2018 when more than half of the states were in the red. The states facing deficits this year are Alaska, Kentucky, New York, Pennsylvania, and Rhode Island.

While these are the states we can confirm are facing specific revenue shortfalls, they may not be the only states facing fiscal difficulties this legislative session. Revenue forecasting is an inexact science, which makes nailing down exactly which states are in the red and by how much tricky. For example, under Louisiana law, the governor and legislative leaders must agree on a forecast before lawmakers can begin their budget deliberations and so far they have not reached a consensus. In Georgia, Governor Brian Kemp (R) has said that slowing revenues mean that his state will need to cut spending by 4 percent this year, 6 percent next year, and that a planned reduction to the income tax rate will likely have to be abandoned, but there has not been a public announcement that the state is in a shortfall. In South Dakota, lawmakers are facing a $3.7 million shortfall, but in the world of state budgeting this is essentially a de minimis shortfall and lawmakers won’t need to take much specific action to resolve it. A final example is Illinois, which has faced notoriously difficult fiscal challenges in the last several years, but because the state’s last budget was based on an arguably shaky foundation, they may not technically need to close a budget gap this year.

Overall, as the National Association of State Budget Officials (NASBO) noted in their Fall 2019 Fiscal Survey of States, “most states saw moderate-to-robust growth in general fund revenues in fiscal 2019, following two years of sluggish growth.” This robustness is attributable to strong corporate income tax receipts as businesses shifted tax liabilities from 2017 and 2018 to take advantage of federal tax reform. NASBO also found that sales tax collections were also up due to state efforts to begin collecting taxes on online transactions. In a report released early this year, the Pew Charitable Trusts found that 45 states were seeing receipts above what they had been collecting prior to the Great Recession.

One cautionary note: While overall revenue growth is up, this year’s 4.5 percent growth is less the 6.9 percent growth states saw last year. It is too early to tell if this is a sign that our period of record economic growth is coming to an end, but many state economists have started to warn that lawmakers should budget more conservatively. They worry that general funds are already struggling to keep up with mounting spending obligations, notably Medicaid, and that a shock to the economy could tip state budgets into crisis. 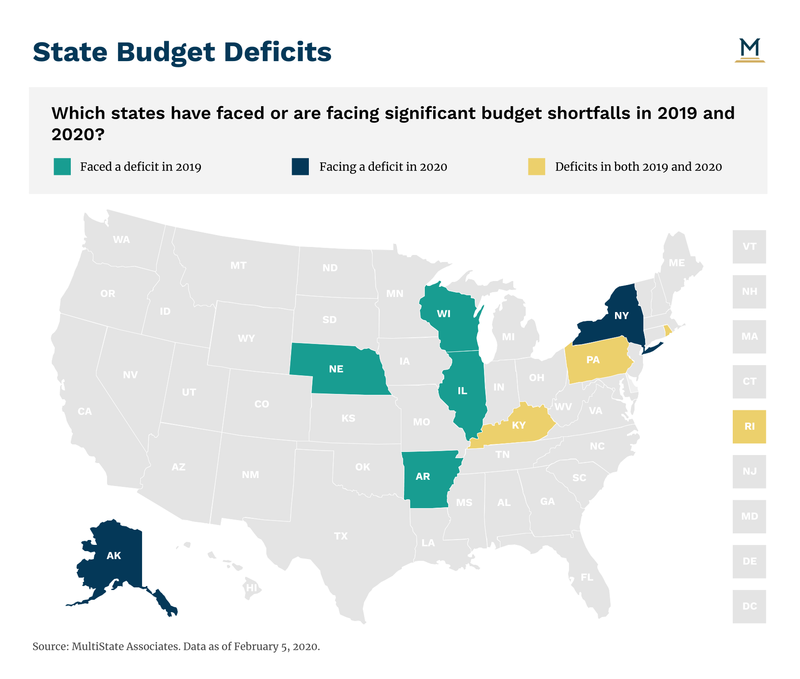 Alaska has faced perennial revenue difficulties, with the state confronting deficits in 3 of the last four years. According to a 2018 government study, 68 percent of the state’s total revenue is subject to appropriation derived from taxes on natural resources, but weakness in global energy markets has put the state’s general fund into a bind. Former Governor Bill Walker (I) attempted to resolve the crisis by reducing payments from the state’s sacrosanct Permanent Fund, but the decision proved so unpopular that he opted not to run for reelection. This year, Governor Mike Dunleavy (R) has yet to unveil any specific plan to close the gap but has said that he intends to issue a Permanent Fund dividend using the traditional formula, holding government spending in check and dipping into savings to get through the fiscal year.

Before leaving office, former Governor Matt Bevin (R) announced that his successor would inherit a $1.1 billion shortfall. A transition memo given to Governor Andy Beshear (D) indicated that the deficit was attributed to the rising costs of corrections, pensions, employee health benefits, Medicaid, and the comparatively modest growth of state revenues. Governor Beshear’s executive budget does propose new taxes on gaming and vaping and would increase the minimum tax on certain limited liability entities but, in keeping with Republican statements from last fall, does not make any revolutionary changes to the state tax code.

Driven by ballooning costs in the state’s Medicaid system, lawmakers in New York will have to face a significant budget gap during the 2020 legislative session and political leaders are at odds about exactly how to close it. In his budget address, Governor Andrew Cuomo (D) made it clear that he would not enact a new broad-based tax to shore up state revenues but would instead seek structural reforms to the state’s Medicaid system including transferring greater fiscal responsibility to localities. Assembly Speaker Carl Heastie (D), by contrast, said last December that he was more comfortable with raising revenue than cutting services, particularly healthcare. It’s currently unclear what specific policies progressive leaders might pursue, but a tax on wealthy residences (the so-called pied-à-terre tax) or high-income earners has been mentioned favorably in the past.

Last November, the Pennsylvania Independent Fiscal Office released a report forecasting that the state would face deficits of $409 million in the current fiscal year, $926 million for the upcoming fiscal year, and would continue to swell to $1.33 billion by FY22. The Keystone State has faced a number of tough budget years of late, including an acrimonious, months-long standoff in 2017. When he was first elected, Governor Tom Wolf (D) proposed a number of aggressive tax policies, but, amid consistent opposition from the Republican-controlled legislature, he has largely abandoned those initiatives. In his 2020 budget address, the governor did not propose any broad-based taxes, he opted instead to renew his call for combined reporting paired with a phase-down of the corporate profits tax rate and a tax on natural gas extracted from the Marcellus Shale. While this year’s relatively small deficit may not necessitate concerted legislative action, lawmakers in Harrisburg will have a more daunting challenge in the years to come if they remain on this course.

Rhode Island Governor Gina Raimondo (D) knows she is facing some tough decisions this year as state budget analysts are forecasting a $180-200 million shortfall. While she has said that she does not support the proposal to increase the top individual marginal tax rate to 10.99 percent, she acknowledges that difficult tax and spending decisions must be made. In her recently proposed budget, Raimondo calls for “modernizing” the sales tax to include a specific set of services (including lobbying, certain kinds of software services, and interior design), legalizing and taxing marijuana, and establishing new brackets for the real estate conveyance tax. While many of these policies will invite significant pushback and controversy, they are not sweeping changes to the state’s tax code.