As 2020 came to a close, Congress clarified the tax treatment of Paycheck Protection Program (PPP) loans. The question for recipients now is: how will the states treat PPP loans for tax purposes?

The answer is not yet clear, and for many states, it will not be clear for months. States with income taxes generally “conform” (or “couple”) to the Internal Revenue Code (IRC). In other words, state income tax laws mostly mirror the IRC with regard to determining what is subject to tax. Some states automatically adopt the latest version of the IRC; this is usually referred to as rolling conformity. Other states adopt the IRC as it was in effect as of a specific date; this is called static conformity. And a handful of states do things in their own way. On top of this basic alignment, most states selectively decouple for specific provisions in the IRC.

With regard to PPP loans, there are two basic questions:

The map below shows the underlying status of each state as rolling conformity, static conformity, or modified conformity. 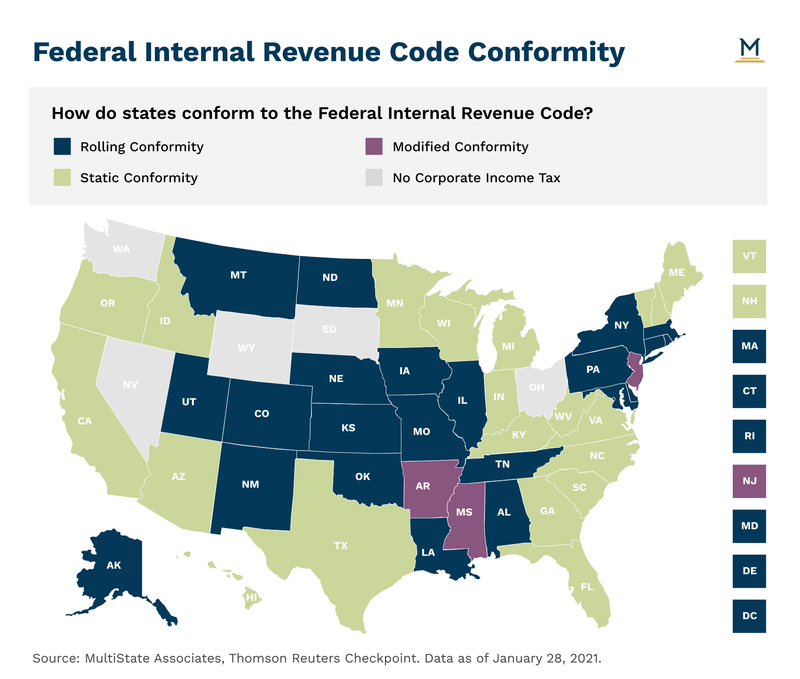 The baseline is that rolling conformity states will follow the IRC - forgiven PPP loans are not taxable, and expenses associated with the forgiven loan are deductible - unless the state legislature acts to decouple. For static conformity states, it is the opposite - forgiven PPP loans are taxable, or the expenses associated with the forgiven loan are nondeductible, or potentially both - unless the state acts to adopt the current IRC (and does not decouple from those specific sections in the process). However, additional analysis is required on a state by state basis as each state has slight differences in exactly how they couple to the IRC.

Businesses and individuals concerned with this issue would be well advised not only to seek competent accounting and legal counsel, but also to contact their state representatives to encourage them to mirror the current IRC’s treatment of forgiven PPP loans. Progressive academics are currently arguing that states should tax these forgiven PPP loans (see: “States and the PPP: The Tax Policy Case for State Nondeductibility” by Adam Thimmesch, professor of law at the University of Nebraska College of Law, Tax Notes Today State, January 28, 2021).

Congress enacted the PPP program to support employment during the economic crisis caused by the COVID-19 pandemic. The program provided loans to businesses, and the loans were eligible to be forgiven if the loan funds were used for covered purposes (mainly payroll and rent).

Ordinarily, forgiven debt is treated as income for tax purposes: cancelation of debt income. Congress’ purpose was to provide direct aid to businesses via a loan program to keep people employed, and thus made clear that forgiven loans would not be treated as taxable income.

Subsequently, the US Treasury issued guidance that while the forgiven loan proceeds were not taxable, the ordinary business expenses which were funded by the forgiven (or forgivable) loan would not be deductible. This guidance clearly frustrated Congress’ intent as it had the same effect as if Congress had not addressed the taxability of forgiven PPP loans in the first instance.

At the end of 2020, Congress “overruled” Treasury and clarified that PPP loan proceeds, if forgiven, were not taxable income, but the ordinary business expenses which were funded by the forgiven loan would in fact be deductible.