MultiState’s tax policy team frequently provides updates on state tax and budget policy developments. This month, the team covered a range of issues — from the updated revenue status of states and tax proposals impacting the business community, to federal aid and political tensions that could impact revenue policy going forward.

In general, most states are experiencing either stable revenues, or moderate revenue challenges — a marked improvement from last year, where public finance experts were predicting dire budget situations in the wake of the COVID-19 pandemic. Our research finds that the vast majority of states are in a relatively stable budget position for the 2021 Fiscal Year with continued recovery in FY 2022.  There are only a few states that will likely face serious revenue challenges (Alaska, Hawaii, Illinois, Maine, New Jersey, New Mexico, and New York). 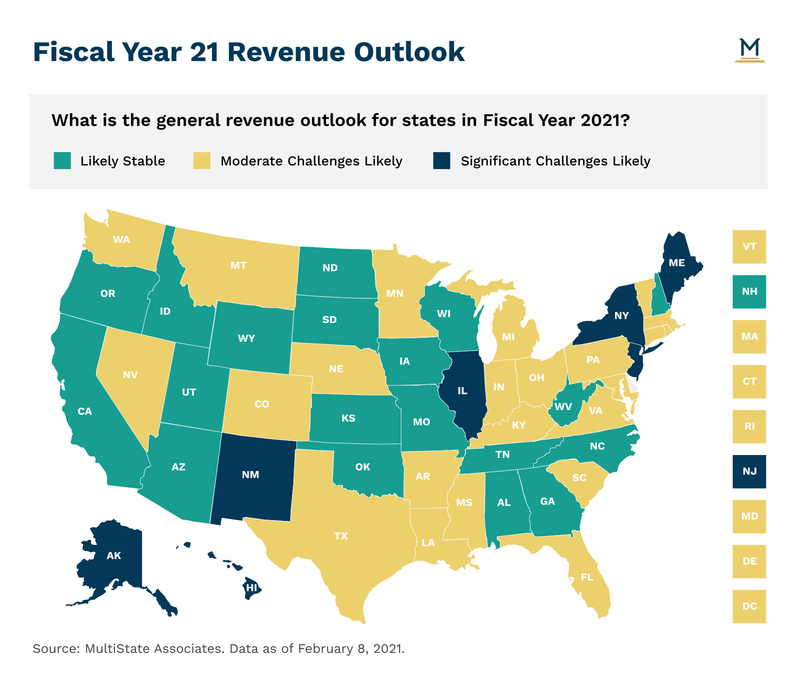 Direct Taxes on the Business Community

This doesn't mean, however, that states will stop pushing for tax increases. States that have pursued increased taxes for a number of years will likely forge ahead with tax increases regardless of their revenue situation. So far, we’ve seen the following tax policy trends emerge:

How Will the Federal Stimulus Impact State Budgets?

It is likely that there will be additional federal aid coming to state and local governments, further strengthening the revenue situation for states. President Joe Biden proposed a $1.9 trillion stimulus relief package, which includes $350 billion for State and Local Coronavirus Relief Funds (“CRF”). States will receive $195.3 billion (60 percent) of the Coronavirus Relief Funds and local governments will receive $130.2 billion (40 percent).  Read our full overview of the state/local aid package here.

In terms of process, what will happen next at the federal level? The various committees in the House of Representatives have marked-up parts of the stimulus package and they will now be brought together into the FY 2021 Reconciliation Act. Speaker Pelosi expects the bill to pass the House by the end of February and then go to the Senate where it cannot be filibustered due to its consideration under reconciliation. Final action is expected no later than March 15 which is the date when the federal increased unemployment payments will cease unless renewed by Congress.

A new trend emerging in the COVID-19 state policy space has been the push by state legislators to curtail the ability of governors to rule by executive orders and state emergencies declarations. Legislators in more than 20 states have already introduced legislation curtailing the powers of their governors to issue executive orders and to continuously extend states of emergencies without obtaining approval from the legislative branch. As introduced, these bills would require governors to get approval from the legislature to continue states of emergencies anywhere from 7 days to 60 days after the expiration of the initial state of emergency.

Tax policy can be one of the most challenging areas for government affairs executives. MultiState offers a customized, strategic solution to meet your needs and can provide an early warning system to ensure you’re positioned for long-term success. Led by MultiState Chairman and CEO Joe Crosby, a nationally renowned state and local tax policy expert, our tax policy team consists of policy analysts, lawyers, CPAs, and economists. For more information, contact us here.