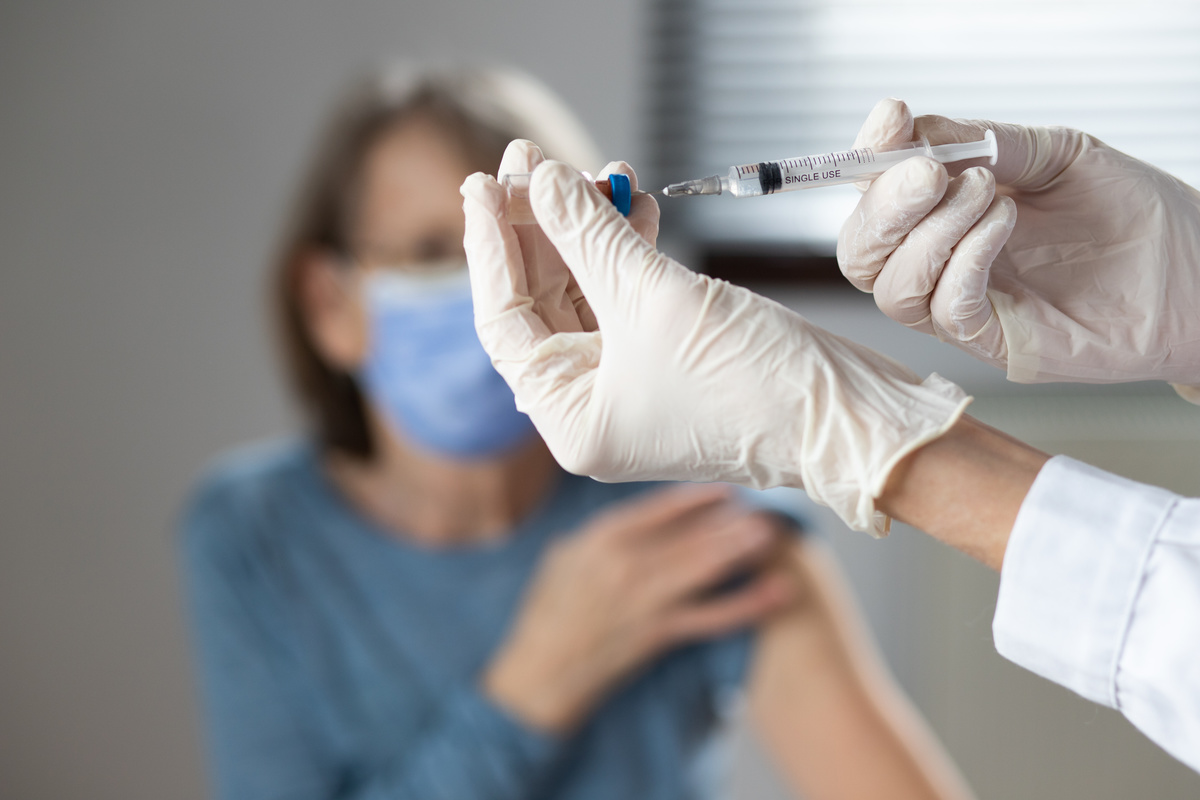 Starting in late 2020, after a year of shuttered stores and hundreds of thousands of deaths caused by the COVID-19 pandemic, the United States began the largest scale vaccination distribution effort in its history. The speed at which scientists developed the vaccine and the technological breakthrough involved were a monumental feat, but now arguably tougher challenges face the country: the harrowing logistics of shipping a fragile vaccine to every corner of the U.S. (and the world) and organizing a two-dose vaccination regimen for nearly every American. And worst of all, we won’t have enough shots for everyone that wants one right away. And we won’t have a full supply of vaccines for quite a while. So who gets priority?

The federal government began to send weekly shipments of the mRNA COVID-19 vaccines from Moderna and Pfizer-BioNTech to the states in December based on population. But once received, each state must decide how to distribute its allotment of vaccinations to its residents.

The first phase was relatively straightforward. States took the advice of the Centers for Disease Control and Prevention (CDC) and prioritized their limited first doses for frontline health care workers and the residents and staff at long-term care facilities. Hospitals and medical facilities utilized their internal expertise to vaccinate their workers and the federal government organized a program with national pharmacist chains CVS and Walgreens to vaccinate much of the long-term care facility residents and staff.

Looking at West Virginia as an early example, as states move past the initial phase of their vaccination plans, more states have taken their own path to vaccinate the unique populations found within their borders. Subsequent phases of vaccine distribution have varied state-to-state with a debate surrounding whether to vaccinate older populations or essential workers first.

The CDC’s Advisory Committee on Immunization Practices (ACIP) initially recommended that states focus on vaccinating frontline and essential workers. Members of this workforce are unable to work from home and therefore must interact with coworkers and customers on a regular basis, resulting in potential exposure to, or spread of, COVID-19. An argument in favor of prioritizing essential workers is fairness and equality. One of four stated goals of the COVID-19 vaccine recommendations from CDC’s ACIP was to “ensure equity in vaccine allocation and distribution.”

Frontline and essential workers have been keeping the country’s economy going over the past year of shutdowns and quarantines. They’ve delivered our groceries and kept the power running through the electrical grid. Additionally, essential workers are a diverse group of Americans that have worked through a pandemic that has hit some segments of the population harder than others.

Can’t the states simply refer back to these stay-at-home era definitions to say which workers should get vaccinated next? The issue here is that there are not enough vaccine doses for such a broad group of the “essential” workforce. Not to mention the logistical nightmare of trying to parse out which job descriptions within an industry are “essential” enough to receive vaccinations before someone else. Such complexity threatens to slow down the vaccination process at a time when speed is essential.

The guidance from the CDC that prioritized essential workers received immediate pushback because older people are most vulnerable to COVID-19. Governor Ron DeSantis of Florida told a retirement community late last month, “We are not going to put young, healthy workers ahead of our elderly, vulnerable population.” Supporters argued that prioritizing older Americans for vaccination would save more lives immediately and is a much simpler defined grouping than frontline and essential workers. It’s easier to check a driver's license than deciphering the intricacies of every job title. By taking some of the complications out of deciding who is eligible for vaccination, states can vaccinate more people more quickly.

Again, by organizing vaccination around age groups, states are dealing with very large segments of their populations. So once the door is opened for certain age groups, other priority populations (such as essential workers or vice versa) will need to wait.

Unsurprisingly, many states have charted a middle path between prioritizing essential workers and older Americans. One thing became clear early on as states transitioned from the planning process to getting shots in arms: As states strive for fairness and equality in distribution, they’ve created complicated rules and penalties that slowed down the distribution of the vaccine in many places. But states are working to balance speed and fairness by narrowly defining broad groups that are eligible for vaccination.

According to MultiState’s tracking of state vaccination rollouts, all 50 states are now vaccinating by age group (up from only 37 states two weeks ago). One state is only vaccinating people 80 years old and up, 9 states have made 75-year-olds and up eligible for vaccination, 11 states have opened up vaccination to anyone 70 years and older, and 29 states are vaccinating people 65 years old and up. Meanwhile, only 23 states are currently vaccinating essential workers beyond health care, long-term care, and first responders. These states have generally limited eligibility to a subset of essential workers, the most common industries are education and childcare, food and agriculture, public transportation, and corrections. 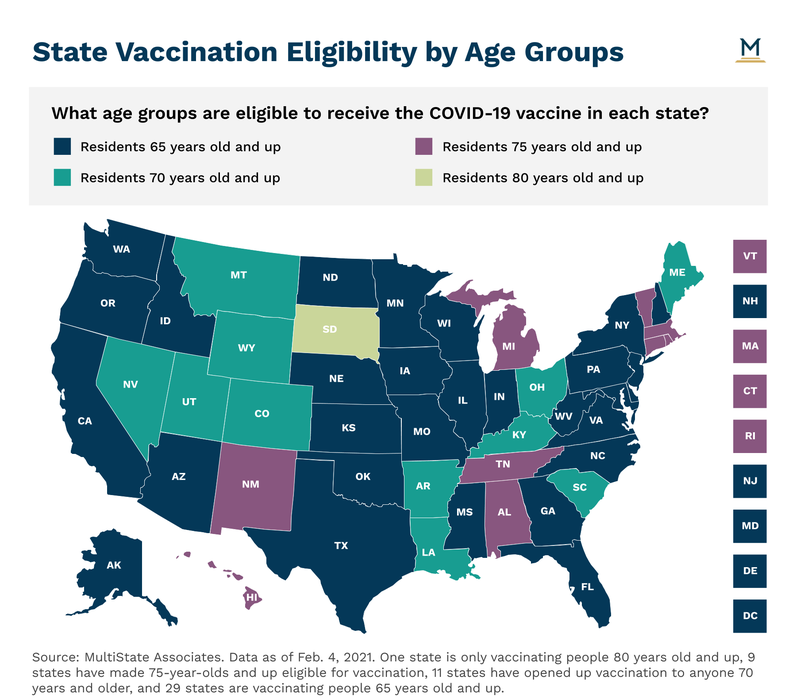 In October, when the CDC asked every state to submit a detailed plan for the vaccination rollout, states tracked closely with CDC guidelines and highlighted early phases focused on frontline and essential workers and people with preexisting conditions that make them vulnerable to COVID-19. However, after hearing arguments on why older Americans should receive priority as well as struggling to pick and choose among the essential workforce, many states modified their vaccination plans in late December and January, as the initial phases of vaccination were getting underway at hospitals and long-term care facilities around the country.

Governors announced that people in defined age groups were eligible for vaccination while defining essential workers more narrowly and pushing that group back into later phases of the vaccination rollout. Most states found a middle ground that allowed for the oldest Americans to begin receiving vaccinations as well as a focused subset of most vulnerable workers.

For example, Ohio has prioritized vaccinating age groups in 5-year increments along with certain industries of the essential workforce. After vaccinating health care workers and long-term care facilities, Ohio next opened up eligibility to those 80 years and older on January 19. The following week Ohio expanded eligibility to those 75 years of age and older as well as people of any age that have a disability or other condition that makes them more susceptible to COVID-19. On February 1, Ohio opened eligibility to anyone 70 years and older as well as employees of K-12 schools. Next up will be people 65 years and older. By narrowly prioritizing the most vulnerable age groups and specific essential workforce industries (e.g., K-12 education), Ohio has helped simplify the complicated question of who is eligible for vaccination while opening vaccination eligibility to a large segment of its population, which should help get shots in arms more quickly.

Production of the mRNA COVID-19 vaccines from Moderna and Pfizer-BioNTech continues to ramp up and new vaccines from AstraZeneca and Johnson & Johnson could boost supply in the coming months as well. A robust supply of vaccines will make the massive vaccination process easier for states because the current limited supply is causing a lot of the headaches and forcing tough decisions on which populations to prioritize over others. As the vaccine rollout continues, states will learn from initial mistakes and grow more efficient at vaccinating their residents.

State health departments have taken on an enormous burden this past year of organizing mass testing and contract tracing programs, educating constituents about a deadly pandemic, and fighting disinformation and occasionally threats from the very people whose mission it is to keep safe. Our federalist system that relies on states and local governments is not always as fast as a top-down approach, but by utilizing all our laboratories of democracy, we’ll discover the innovations needed to solve our most critical challenges.

As the supply of the vaccine increases and states work out the initial kinks of distribution, we’ll see vaccinations continue to increase in priority populations through the spring and hopefully widely available by summer. Governors, public health officials, and state lawmakers know that thousands of lives and jobs are on the line, so the focus of these public officials will be on getting the vaccination distribution right.
MultiState is tracking each state's vaccination plan as it adapts to the evolving environment. MultiState's State Vaccine Dashboard is focused on who is currently eligible to receive a vaccine in each state as well as plans for future eligible populations.