The COVID-19 pandemic coincided with a major election in 2020, which left states scrambling to amend voting laws — particularly around absentee/mailed ballots — to allow electors to cast their ballots safely. Balancing access to the ballot with security concerns is a major issue for state policymakers before the 2022 elections. This is the first installment of a three-part series covering current election laws and recent legislation to amend these laws. It should be paired with MultiState's State Voting and Election Laws Landing Page and Dashboard, where we’ll be keeping track of this vital issue moving forward.

The first questions we’ll tackle while examining voting and election laws in the states are: Who is eligible to vote? And how can eligible voters register for upcoming elections?  So far, state lawmakers have introduced over 450 bills addressing voter registration and another 150 bills on voting rights for people convicted of a crime. 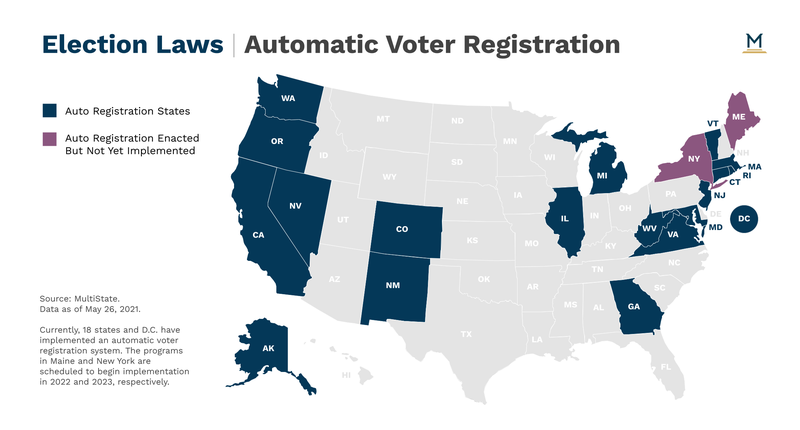 Eligible voters must register before voting in their state (except North Dakota, which does not require voters to register). Currently, 24 states allow voters to register on the same day that they cast a ballot (primarily on election day and any designated early voting days). But even then there are exceptions: Alaska and Rhode Island only allow election day registration to vote for the U.S. President and Vice President. North Carolina allows voters to register on the same day during the early voting period but not on election day. For the remaining states, election offices must receive your registration by a certain deadline ranging from 30 to 15 days before the election. 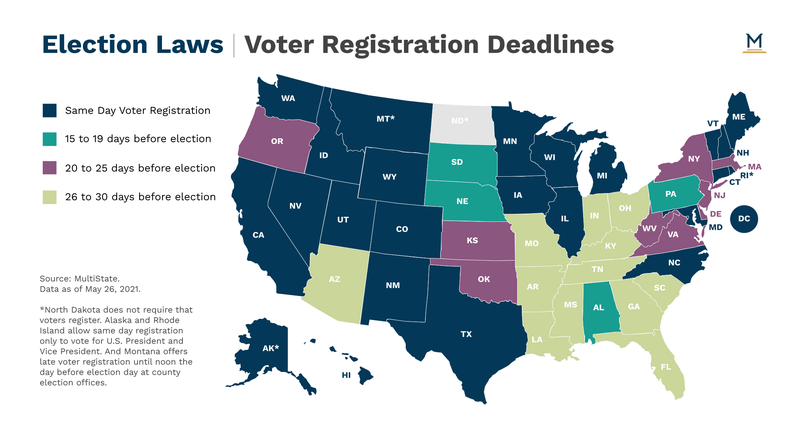 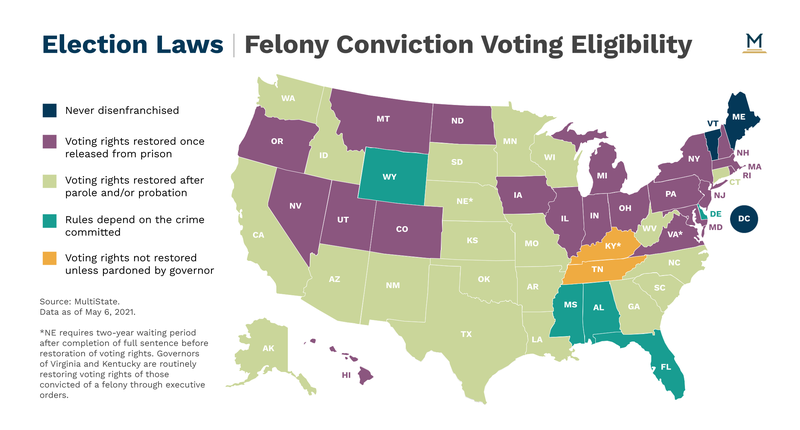 Florida has garnered the most headlines in regards to felony conviction disenfranchisement recently. In 2018, Florida voters approved Amendment 4 to automatically restore the right to vote for people with prior felony convictions, except those convicted of murder or a felony sexual offense, upon completion of their sentences, including prison, parole, and probation. However, lawmakers enacted a law in 2019 to require people convicted of a felony to complete "all terms of sentence" including full payment of restitution, or any fines, fees, or costs resulting from the conviction, before they could regain the right to vote. This law was upheld by a federal appeals court in 2020 and has caused much confusion regarding the rights of people convicted of felonies to register to vote in the state.

Governors have also taken independent action in several states to restore voting rights to people convicted of a felony. In 2018, Governor Cuomo signed an executive order restoring the right to vote immediately following release for most New Yorkers who are on parole after incarceration for a felony. This means that the governor’s office reviews the information of each person released to community supervision in New York and then issues a partial executive pardon that restores each approved person’s ability to register and vote. In late 2019, Kentucky Governor Andy Beshear issued a blanket pardon to over 140,000 residents who have completed sentences for nonviolent felonies. Similarly, Iowa Governor Kim Reynolds signed an executive order in 2020 to restore the right to vote to people convicted of a felony (except homicide) upon completion of prison time.

This year, New York lawmakers enacted legislation (SB 830) to restore the voting rights of people on parole. This would codify much of Governor Cuomo’s 2018 executive order. And lawmakers in Washington enacted a law (HB 1078) this session (effective January 1, 2022) that will restore the right to vote for individuals convicted of felonies automatically upon their release from incarceration. Previously, people convicted of a felony in Washington had to wait until parole and probation periods had ended. Washington will become the twenty-first state to restore the right to vote for people convicted of a felony once they are released from prison.

Next week’s installment of MultiState’s election laws blog post series will cover legislation around absentee/mailed ballots. In the meantime,  check out MultiState's State Voting and Election Laws Landing Page and Dashboard, where we’ll be keeping track of this vital issue moving forward.