For more than a decade, state governments have been more than twice as likely to be under unified partisan control than divided. Whether a result of individual political sorting, polarization, or developments in redistricting strategies, Democrats and Republicans — but mostly Republicans — have been increasingly successful in holding the house, senate, and governor’s mansion (known as a “trifecta”) in their states. Given the increased prevalence of trifectas, the effects of unified governance warrant examination. As part of this analysis, we investigate how trifecta control impacts state tax policy. We find that, when fully empowered, Democrats will raise revenues significantly  more frequently and Republicans will cut revenues somewhat frequently, while divided governments usually maintain the status quo.

In order to determine the impact of trifectas, we utilized data from the National Conference of State Legislatures Tax Action reports for 2011 to 2020. These reports provide yearly estimates of the dollar value of each enacted tax increase or reduction. We then expressed the value of the increase or decrease as a percentage of each jurisdiction’s gross state product (GSP) to provide an apple-to-apples comparison of the magnitude of each state’s tax policy changes each legislative session. Finally, utilizing publicly available data on when states were governed by a trifecta (Ballotpedia has a series of useful charts) as an overlay, we get a clearer picture of how trifectas impact legislated revenue changes.

Note also that political reporting typically approaches fiscal policy with the binary that states are either “cutting taxes” or “raising taxes,” but this approach does not allow the specificity needed for this analysis. As we’ve discussed elsewhere, every state’s fiscal legislative history is a mixture of policies that bring more revenue into the state and those that reduce state revenues. During a legislative session, a state might raise the corporate income tax rate, but also provide new exemptions to the sales tax and in such a situation the state could be said to be both raising and cutting revenue. So while we may colloquially think of revenue increases as tax hikes and revenue decreases as tax cuts, for purposes of this analysis we will operate with the understanding that both levers can be pulled at once.

When considering states that maintained single party trifecta control through the period from 2011 to 2020, the disparities grew wider. There are 14 states where Republicans held continuous control and four states where Democrats held continuous control over this time period. These Democratic states raised more than three times as much new revenue as a percentage of GSP than states with decade-long Republican trifectas, while these Republican states’ revenue cuts (cumulatively) were only 14% greater than their Democratic counterparts. In other words, both Democrats and Republicans cut taxes — with Republicans cutting slightly more — but Democrats at the same time raise taxes much more regularly and at a far greater magnitude than Republicans.

What seems clear from the data is an adage that we at MultiState regularly propound: tax politics trumps tax policy. When state policymakers are all under the same political banner, the legislative process is smoothed and more changes cross the finish line, regardless of their revenue impact. It also seems clear that, at least for this period of time, the two parties lived up to their general fiscal reputations: Democrats were more likely to raise revenues and Republicans were more likely to cut them. But the delta between the two parties with respect to tax hikes was much larger than it was with respect to tax cuts. 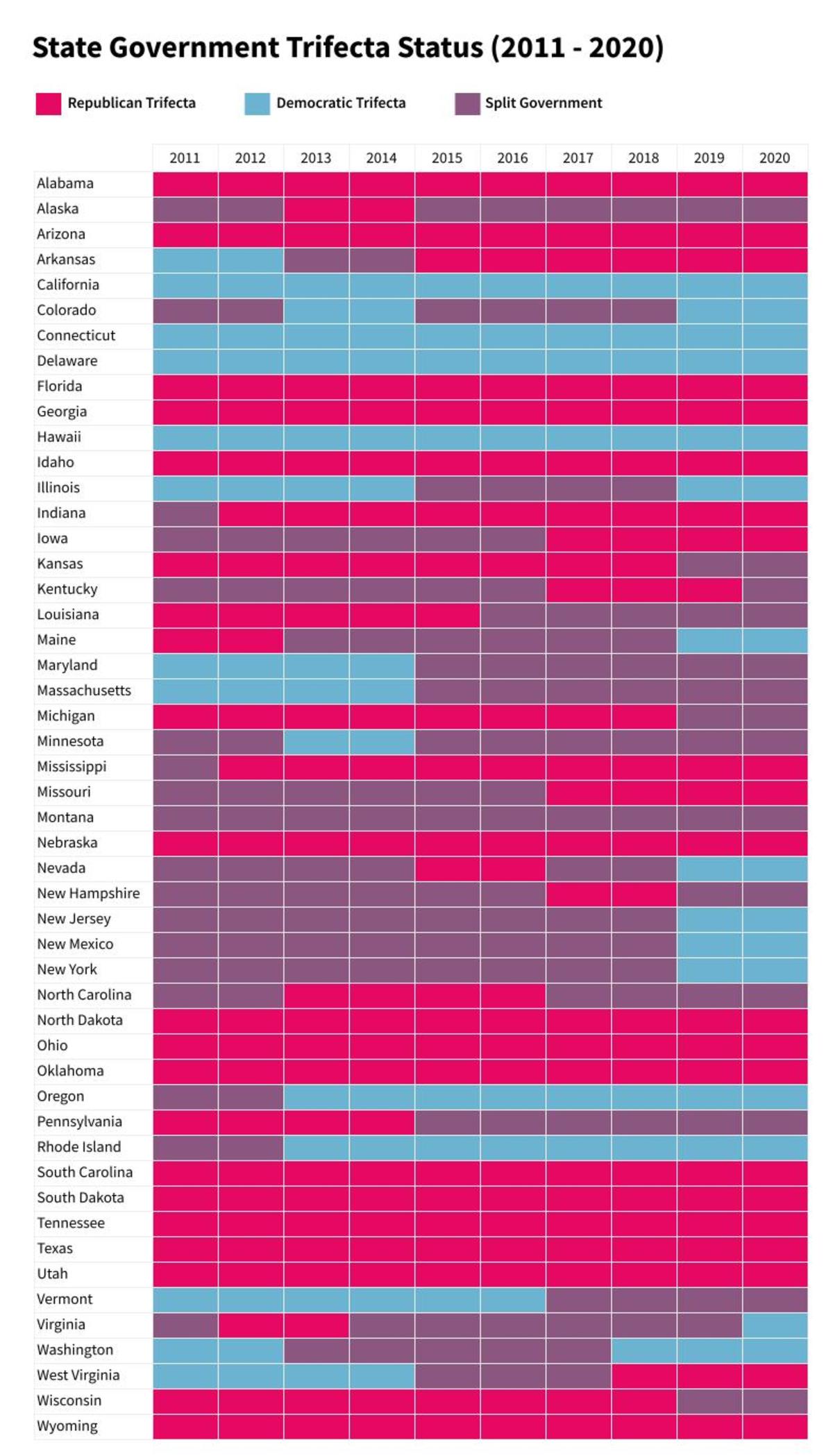