What Will Legislatures Focus on in 2022?

With 40 states already in regular session, state legislative activity is picking up around the country. Policymakers have spent months considering their legislative priorities for the 2022 session, and many have spoken to the media about their goals.  So, what are the top goals of legislators this year? To find out, we sorted through media reports, interviews, and political analysis in every state and noted big policy ideas cited by legislative leaders. Those issues were then sorted into policy categories and totaled to determine what the most prevalent policy priorities for state legislators across the country. The top-level results are summarized in the chart below. 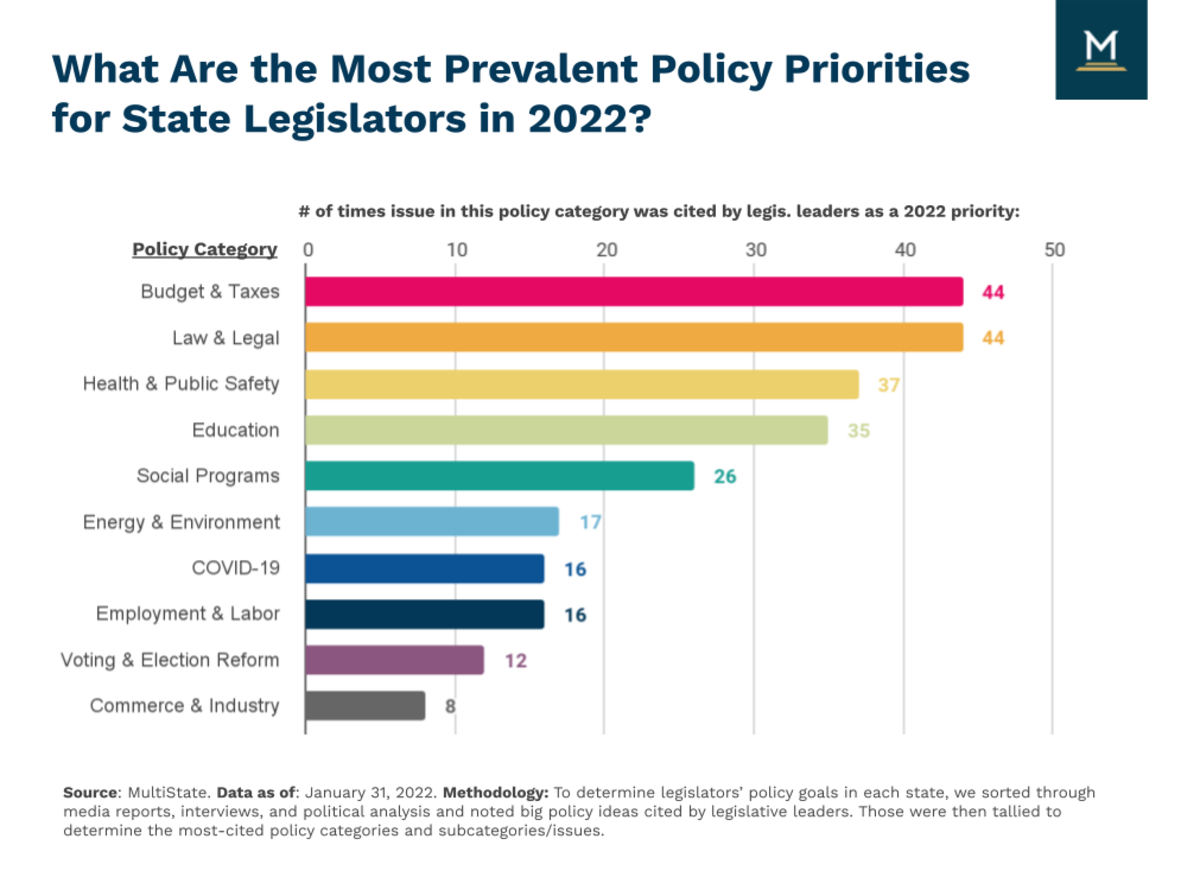 Scroll to the bottom of this post to see the breakdown of issues in each of these larger policy categories that were cited by legislative leaders, allowing us to examine these broad policy areas with a more granular view. The chart is organized by broad policy category with the most cited at the top (issues related to Budget & Taxes) and the least cited at the bottom (issues related to Commerce & Industry). Two issues are driving much of the legislative priorities this session: the effects of COVID-19 and budget surpluses. The surpluses are spurred by larger than expected tax revenues due to the quick bounce back of the economy as well as the unprecedented influx of federal dollars to the states from the pandemic stimulus packages and infrastructure bill from Congress. States are directing that money toward schools, health care – especially mental health – childcare, and housing, all issues directly affected by the pandemic. “We had hoped that as we go back, we’d be through the pandemic, but it hasn’t gone away,” California Senate President Pro Tem Toni Atkins (D) said. “We’re going to have to continue to bear that in mind.” This year also saw a surge in controversial social issues with red and blue states coming down on opposite sides of abortion access, firearms, vaccine mandates, and banning critical race theory. Governor DeSantis (R), who will set much of the legislative agenda in Florida this year, told an interviewer that “it’s not just critical race theory, a lot of other inappropriate content can be smuggled in by public schools. So what we’re going to be doing in this upcoming legislative session, we’re gonna give parents the ability to go in and get legal relief if they’re not following our state standards with respect to history and government.” 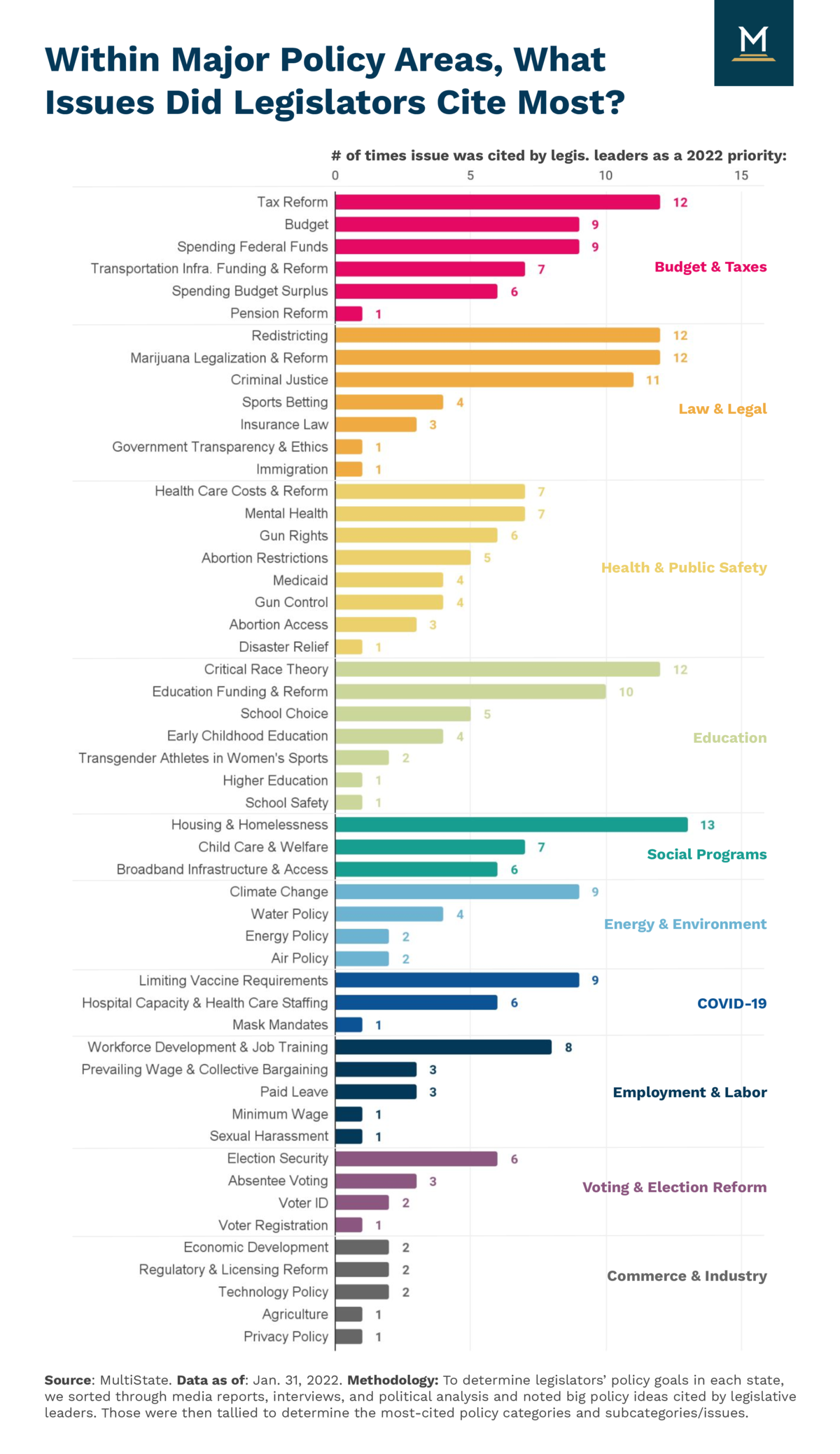 While our chart shows the full range of topics mentioned by legislators in the media, this doesn’t guarantee action on any issue, especially in states with split party control. This can, however, provide an overview of legislative trends and issues likely to come up across the country. Issues prioritized by legislative leaders can differ from the issues that governors might prioritize. For instance, issues like tourism, economic development incentives, regulatory reform, and trade, which we categorize under Commerce & Industry, are often touted by governors but less so from legislative leadership. We’re examining governors’ state of the state addresses as they’re released over the next few weeks and will provide a similar analysis, of gubernatorial priorities, as we’ve done in previous years. An analysis like this is helpful in forecasting priorities, but lawmakers will react to new activity as it arises throughout the year. For instance, our last legislative priorities report was published in January 2020, shortly before the COVID-19 pandemic hit and scrambled legislative sessions.

We had a tie for the most popular categories this year. First we’ll discuss Budgets & Taxes. As mentioned above, budget surpluses and an infusion of federal funds have allowed states to provide tax relief and additional spending for residents. Iowa Senate Majority Leader Jack Whitver (R) said “When Republicans collect too much of your hard-earned dollars, we will keep our promise to give it back. We must return that money to taxpayers in the form of major, permanent pro-growth tax reform.” Reforming the tax code, writing a budget, spending federal funds, and investing in transportation infrastructure are the top priorities for lawmakers in this category. Much of this is affected by the unprecedented amount of federal dollars pouring into states (e.g., ARPA, CARES Act) as well as the recently passed federal infrastructure law.

The other most popular category this year is what we grouped together under Law & Legal issues. This category includes several of the year’s most mentioned issue priorities, including criminal justice reform, redistricting, and marijuana legalization. Maryland Senate President Bill Ferguson (D) said in a statement that “eighteen states and the District of Columbia have already legalized recreational cannabis. Maryland must do the same and a large majority of Marylanders in both political parties support an equitable framework that immediately addresses the injustices in our current criminal justice system.” Criminal justice reform is a trending issue after the large protests of 2020 and growing crime rates in 2021. Nearly half of the states waited to draw their once-a-decade congressional and state legislative maps until this year, which is why redistricting is still a big priority for state lawmakers this session. And marijuana is a surprisingly popular issue in red states this year, particularly for medical use, as well as states with established legalization programs looking to make adjustments.

The broad category of Health & Public Safety is the third most popular this session and includes several hot button issues along with traditional health care issues which are particularly important in the wake of a pandemic. General health care issues are popular this year, such as reform efforts and Medicaid, but investments in mental health programs are an area of investment singled out by lawmakers. This is likely an acknowledgement of the mental health struggles that have taken place after nearly two years of lockdowns, school closures, quarantines, and other COVID-19 restrictions. Rhode Island House Speaker Joe Shekarchi (D) told his colleagues that “a good deal of our work, as was the case last year, will focus on the health and economic issues related to the pandemic, which still has us in its grip.” Lawmakers also vowed to directly work on legislation surrounding two controversial social issues this year. First, firearms legislation, split between gun rights in red states (including bills to allow permitless carry) and gun control bills in blue states. Second, abortion legislation, split between expanding access to abortion in blue states and restricting access to abortions in red states. Access to firearms is a perennial issue, especially in an election year, but the increase in abortion related bills is likely a response to the U.S. Supreme Court’s upcoming case on the issue challenging a restrictive Texas law.

Education issues are the fourth most popular category this year. Again, as schools struggle to return from COVID-19 closures, K-12 education in particular has become a lightning rod. Increasing K-12 education funding is a popular issue now that states are flush with surplus and federal stimulus funds. Idaho House Speaker Scott Bedke (R) said "we understand that the most critical component to a good education in Idaho is a good teacher, particularly in our K-12 systems and particularly in the K-3. We want our kids leaving the third grade reading at grade level. We've got to be on top of our literacy issues here. We've seen from some of the early data that we've given some of the scores back, at least when it comes to literacy in K-3, and we can't allow that to happen. We've got to get on top of that." But the most mentioned priority for legislatures in the Education category is banning the teaching of “critical race theory” from schools. Efforts to expand school choice programs (e.g., charter schools, home school options) and investments in early childhood education are also priorities for lawmakers in a handful of states.

The fifth most popular category this year is Social Programs. By far the most popular issue area here is housing, which includes affordable housing investment and zoning reforms to allow more housing construction. This is a new trend over the past few years that’s worth watching as housing prices continue to rise. Childcare, another pocketbook issue for many voters, and broadband access are also top issues in this category. Vermont Senate Pro Tem Becca Balint (D), after the governor’s State of the State address, responded “We have to address the housing crisis. We have to continue investing in broadband and child care.”

The following policy areas were also included in our analysis: