Lawmakers are less likely to do big things on taxes if an election is coming up. While not always an iron-clad rule, it’s a useful heuristic that legislative sessions will be quieter during even-numbered years.

But why settle for anecdotes when you can analyze the data? Utilizing a decade’s worth of data on tax legislation from the National Conference of State Legislatures (NCSL), we can put an exact number on this supposition. Collating NCSL’s figures allows for more precise comparison of the dollar value of enacted revenue increases and decreases (which, combined, we define as legislated revenue volatility) during election years versus off years to compare.

(A few further methodology notes: In order to keep an apples to apples comparison, this analysis excluded those states that only meet every other year — Montana, Nevada, North Dakota, and Texas — and took into account the offset election cycles used in New Jersey and Virginia. We also accounted for the fact that Oregon moved from holding biannual sessions to regular annual sessions in 2011, though this did not have a noticeable effect on the data. Finally, certain states, such as Louisiana, can only consider fiscal policy changes during prescribed years, but all of these states also have mechanisms for holding special sessions if necessary, so these states were not excluded from the standard analysis.)

The analysis showed that legislated revenue volatility from enacted tax changes falls on average by about 30 percent during a state’s scheduled election year; however, there were significant differences between the individual bienniums. During three of the observed two-year election cycles, volatility fell by between 50 percent and 76 percent, while during the other three cycles volatility rose by as much as 12 percent (see chart below). 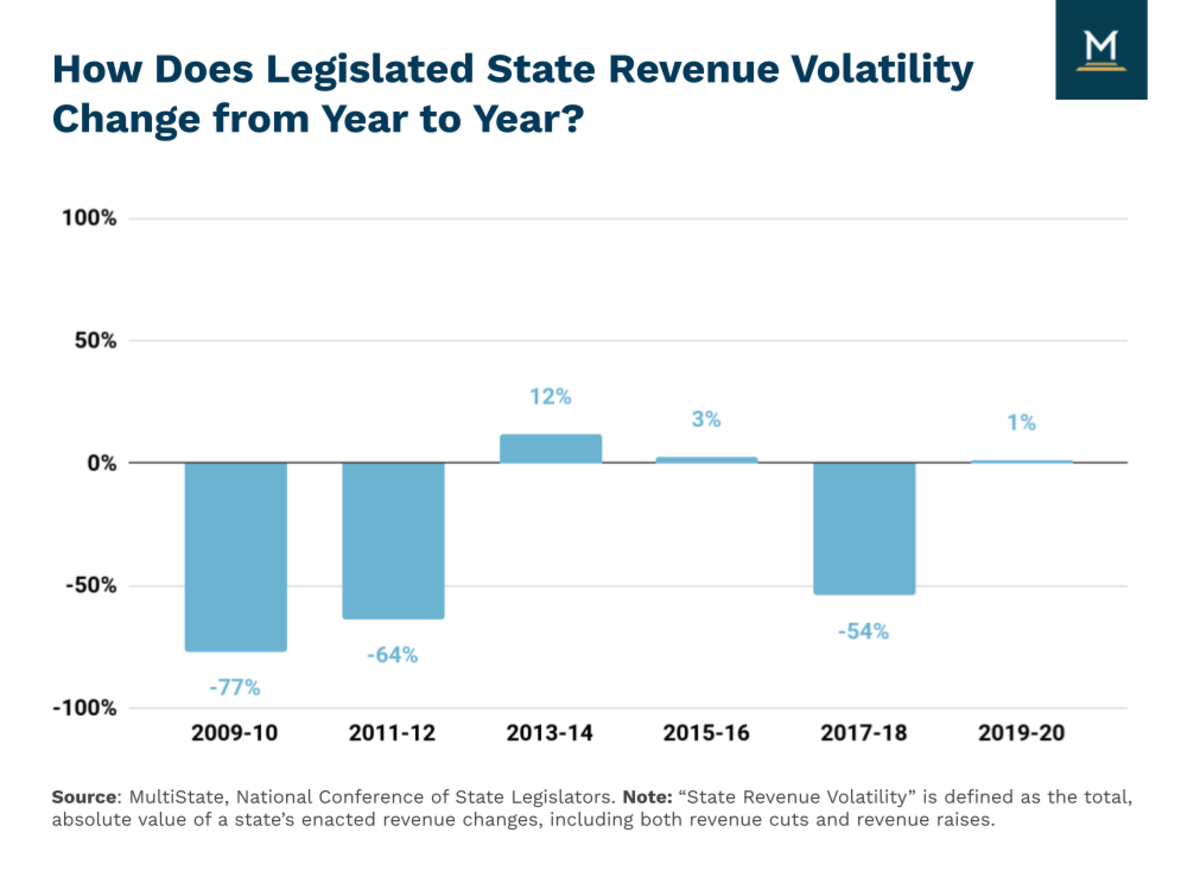 It’s important to note that in bienniums where legislated revenue volatility appeared to increase, the average was typically skewed by a handful of states that enacted an abnormally expansive set of tax changes. For example, from 2013 to 2014 the vast majority of states did not see increases in tax volatility, but Michigan and Pennsylvania passed significantly more tax revenue changes during the election year than then they did in the off year — 1,550 percent and 5,501 percent more, respectively.

This suggests that state lawmakers are typically inclined to not take action on taxes during an election year, unless there are specific budgetary or political concerns that need to be addressed.

Revenue Cuts Are Only Slightly More Common than Revenue Increases

Obviously lawmakers still like to tout a history of tax cutting on the campaign trail (we are likely to see banner examples of that this year), but the numbers show that lawmakers see any kind of revenue shakeup as a risky proposition before facing voters.

What Factors into the Election Year Slowdown?

While we can’t apply the same rigor to it, there are a few likely factors to explain why lawmakers are markedly less likely to enact tax legislation in an election year.First, the standard explanation that lawmakers don’t want to make major, controversial policy changes when their jobs are imminently on the line makes intuitive sense. It is easily understandable why it wouldn’t be appealing, for example, to hike the sales tax by a few points and then ask voters to reelect you. It would open a candidate up for demonization from their opponent, voters would feel the change in their pocketbooks, and it could alienate important constituents or donors.

Second, there is the procedural element that about one-fifth of states operate under a biennial budget system. While obviously tax legislation need not happen concurrently with budget negotiations, the one often piggybacks on the other. Lawmakers who are constitutionally required to engage with state finances and are compelled to find a way to balance the books are much more willing to enact tax legislation than if those fiscal pressures were not in place.

Finally, it can’t be overstated that writing tax policy is hard and takes time, which is often in short supply during election years. In many states, legislative sessions are shorter during even-number years. And if the number of days is the same the tenor can be different, with lawmakers eager to push through their legislative work so that they have more time for campaigning. But making big changes to the arcana of the tax code is arduous. Tax bills involve precisely wording that can go on for hundreds of pages. If you want to do it well, it’s a process that requires stakeholder meetings, committee hearings, and policy negotiation. If lawmakers are eager to get out of the capitol and onto the campaign trail they might choose to wait until they have more time to focus.