Until recently, Vermont was one of only five states without a statutory code of ethics. However, that changed with recent legislation enacted in May. 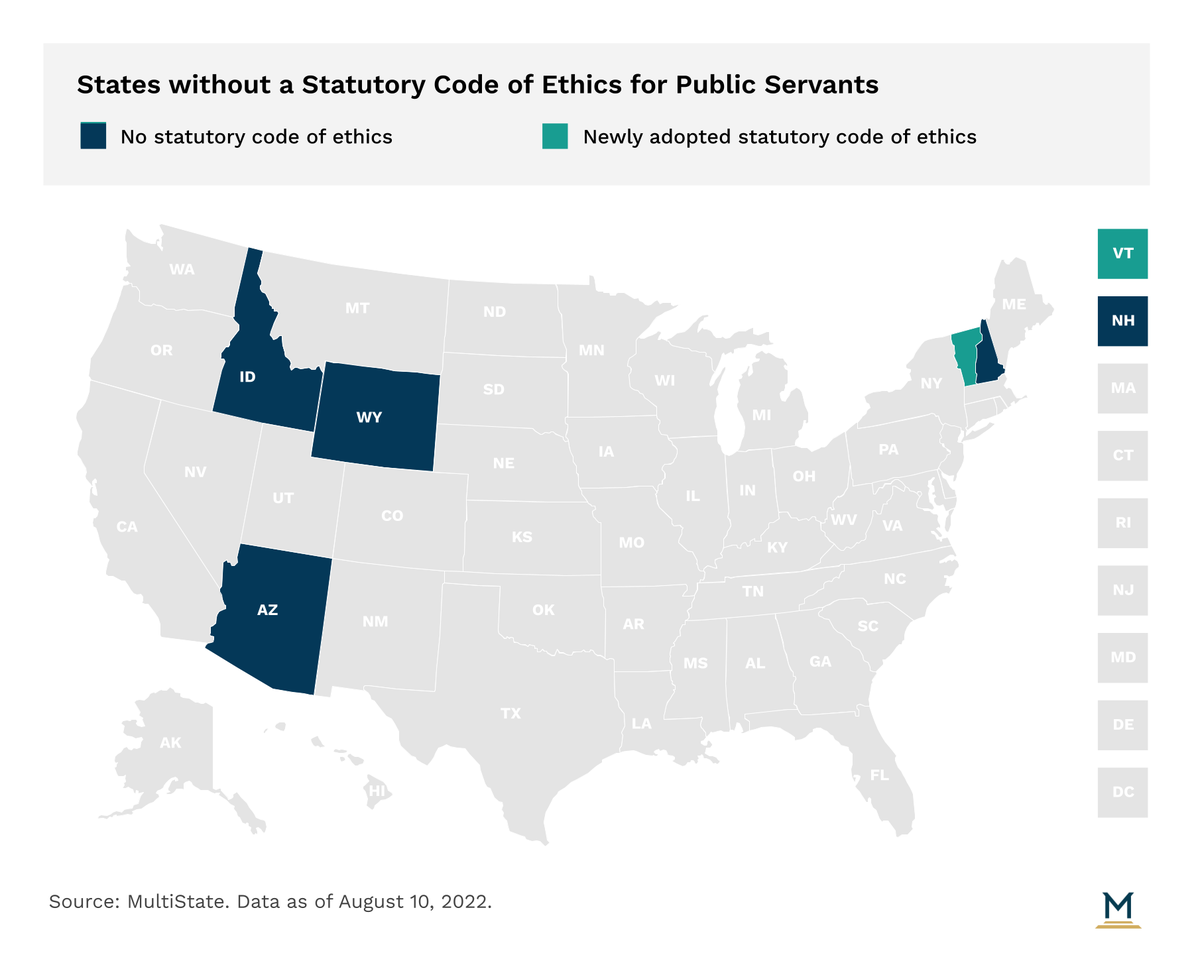 Vermont codified its first statutory code of ethics for public servants with the enactment of new legislation (VT SB 171). The code of ethics addresses conflicts of interest, preferential treatment, gifts, outside employment, the use of state employment for personal gain, and more. Whistleblower protections are also included in the legislation. Under the adopted code of ethics, all allegations of ethics violations will be reviewed by the Vermont State Ethics Commission, who will then refer the complaint to the state agency that employs the public servant to carry out the investigation. The Commission does not carry out the investigation as it still lacks investigative or enforcement powers.

Why the change? In 2017, the Vermont Legislature passed legislation that created the State Ethics Commission. The Commission had no investigative or enforcement powers due to the lack of a code of ethics at the time. In 2020, Governor Phil Scott (R) and other state officials asked the chairs of various legislative committees to begin to work on the creation of a code of ethics for public servants.

Governor Scott called the measure “a positive step forward to demonstrate to Vermonters that its elected officials are committed to restoring . . . faith and trust across all three branches of state government.”

Scott added that the legislation was “an overdue step, as most other states have existing ethics commissions, disclosure laws and conflict-of-interest rules already in place.” However, this newly adopted code of ethics is merely a starting point, creating a platform for new and revised ethics rules. As they evolve and develop, these rules will dictate how government officials can and cannot conduct themselves with both internal and external parties.

What Are the Implications of the New Code of Ethics?

The code creates baseline requirements in regards to gifts including limitations of their value. Public servants may not accept or solicit a gift unless it is permitted by the code. The code defines a “gift” as, “anything of value, tangible or intangible, that is given for less than adequate consideration.” There are many permissible gifts under the code that public servants may accept. Some notable ones include:

As mentioned, there are other permissible gifts under the code regarding inheritances, gifts between public servants, promotions and rebates that are available to anyone, and so on.

The adopted code incorporates already existing statutes (2 V.S.A. § 266 and §267) regarding post-government employment for legislators and executive branch officials, which requires that one year must elapse prior to these individuals engaging in lobbying activities. The code also created a new restriction for legislative staffers and employees for after they leave their position. This restriction forbids these individuals from appearing before the full legislature, committees, or the office by which they were employed to engage in compensated lobbying activities other than such activities which represent the state where a significant state interest is direct and substantial.

When at odds with rules of professional responsibility — like those of attorneys in Vermont - the new law takes precedence. The code also leaves existing agency ethics rules — like those of the legislative and executive branches — intact. As previously mentioned, the code is meant to act as a baseline for rules of ethics, and to establish rules of ethics where there were none previously.

Public servants must undergo mandatory ethics training within four months of assuming their position. In addition to this, they must also redo the training at least once every three years.

Vermont’s newly adopted code of ethics is merely a starting point. Future developments in this arena could include the strengthening of the existing code of ethics via the creation of new rules or by beefing up existing ones. The code also allows for agencies to create ethics rules independently that go beyond those outlined, which is another way in which changes could occur.

In addition to these potential changes, the Ethics Commission could be granted investigative and enforcement authority. This would ensure that all violations are handled by a third party rather than the agency that employs the individual in question. Discussions are being held to grant these powers to the Commission.

It is also possible that other four states without a statutory code of ethics on the books (Arizona, Idaho, New Hampshire, and Wyoming) could begin implementing their own.