Track 2022 state legislative elections, with analysis from our experts and a downloadable quick reference resource.

Ballot measures, more particularly the initiative and referendum process, allow voters in some states to take direct action to enact statutes and amend the state constitution. The history of direct democracy in the United States primarily dates back to the progressive era. In 1898, South Dakota became the first state to authorize its citizens to use the popular referendum process to repeal specific statutes that the state legislature passed. Over the next 20 years, nearly half the states amended their constitutions to allow voter-led initiative, referendum, and/or recall processes. These tools of direct democracy — allowing citizens to have a direct say in public policy in the state as opposed to relying on their elected officials under the republican system — were a response to corruption scandals rampant in state legislatures of the era. Today, these systems remain a core part of the state public policy system.

So far, over 100 statewide ballot measures have been certified to appear on 2022 ballots in 35 states, of which, most will appear on the Nov. 8 general election ballot.

Voters approved state constitutional amendments to protect abortion access in California, Vermont, and Michigan, and rejected measures to explicitly limit abortion protections in Montana and Kentucky. Kansas voters rejected a measure that would exclude abortion procedures from protection in Aug.

Voters approved measures to legalize marijuana for recreational use in Missouri and Maryland but rejected similar measures in Arkansas, North Dakota, and South Dakota. Currently, recreational marijuana use is legal in 19 states.

Sports Betting. In California, voters rejected two high-profile measures that would have legalized sports betting in the state as well as saying no to a major initiative that would have increased taxes on high-income earners and dedicated the revenue to zero-emission vehicle incentives and projects as well as wildfire prevention.

You can learn about each of the statewide ballot measures and keep track of their progress using MultiState's 2022 Elections Dashboard. 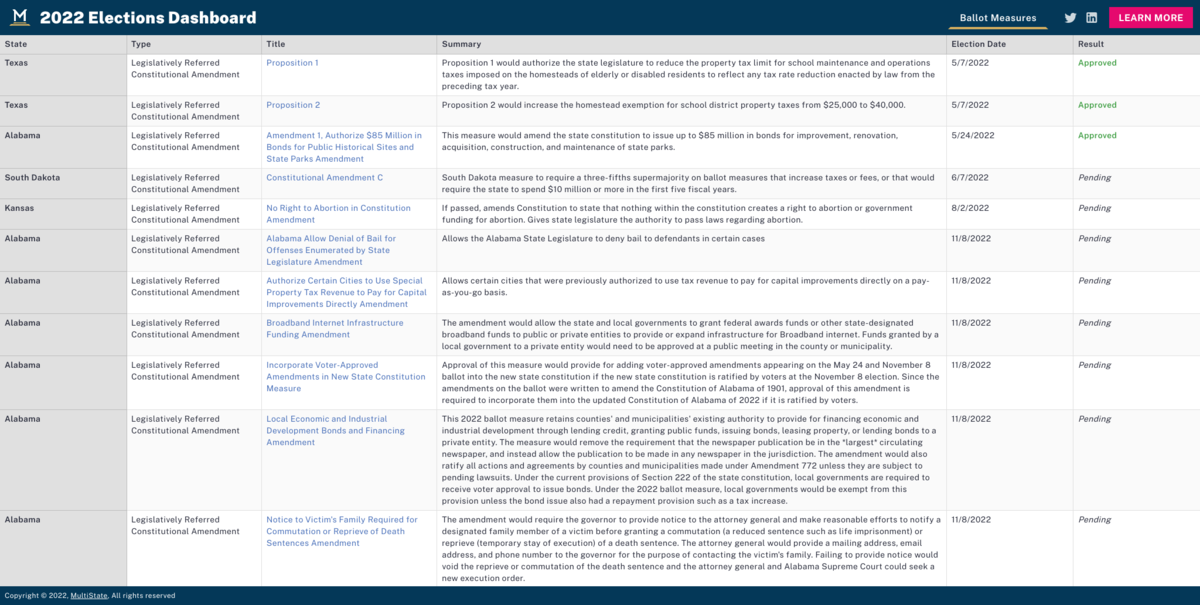