Home
/
Insider
/
•••
Share
California Governor Jerry Brown (D) is taking credit for getting a huge transportation funding package — $52.4 billion over ten years — through the legislature. Citing 23 years without a gas tax increase, Brown had failed to pass a major transportation funding measure during previous legislative sessions, but the governor has promised to sign the recently passed Road Repair and Accountability Act of 2017 into law.

In a dramatic vote the night of April 6, the California State Assembly passed the measure (CA SB 1) with the required two-thirds supermajority and no votes to spare. In California, tax increases require a supermajority in the legislature, and SB 1 garnered a 27-11 vote in the Senate and 54-26 in the Assembly. Despite accomplishing this political feat, Brown and Democratic leaders in the legislature are being scrutinized for doling out $1 billion in district-specific transportation spending to convince on-the-fence lawmakers to vote for the bill.

Here's how the Road Repair and Accountability Act of 2017 will raise $52.4 billion over ten years:
Overall, the legislation is expected to raise $5.2 billion a year for infrastructure investments in the state and cost the average California driver about $10 per month.


California to Become 18th State to Raise Gas Tax Since 2012

When the fuel tax increases go into effect in November, California will become the 18th state to raise its fuel taxes since 2012. State lawmakers are significantly more likely to pass an increase into the state's gas tax during a non-election year, so expectations are set for a big year in new transportation investment in 2017. After California, the two states furthest along are Indiana (IN HB 1002) and South Carolina (SC HB 3516). Both states have passed transportation funding packages through one legislative chamber that would raise their state's gas tax by 10-cents-per-gallon (immediately in Indiana and over five years in South Carolina). 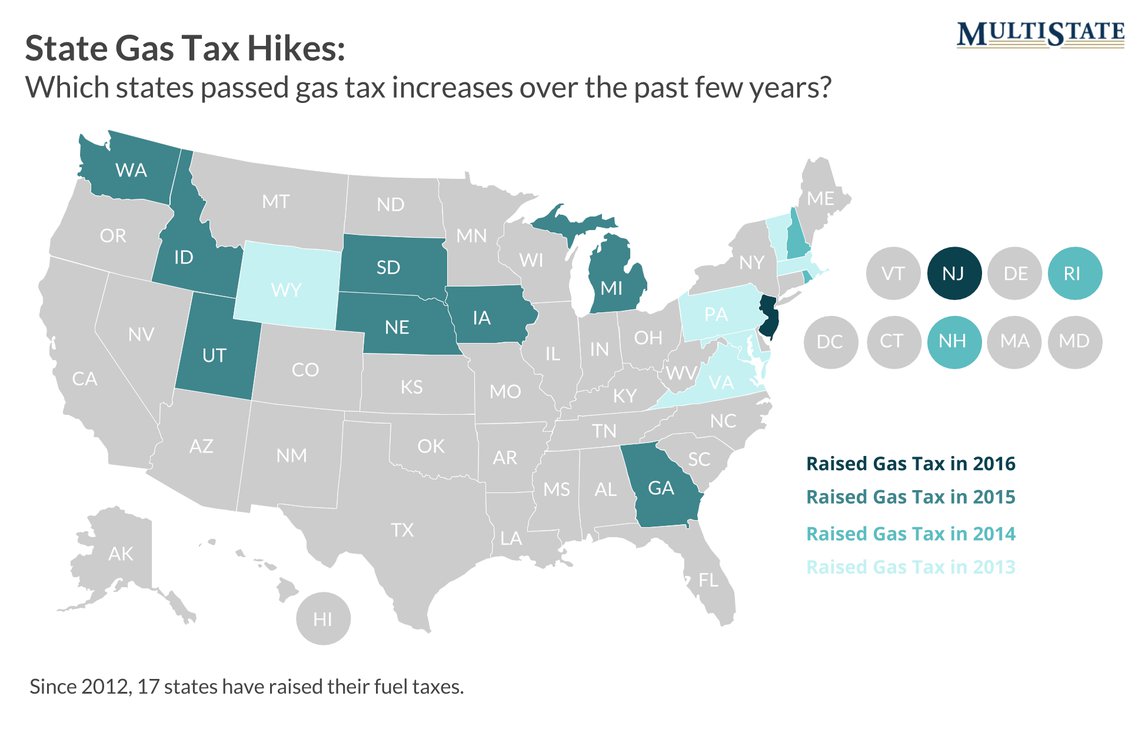 Policymakers are increasingly faced with a stark reality: Costs to build and maintain the country's transportation infrastructure — namely our roads and bridges — are on the rise, and the way we typically pay for that investment is raising fewer funds than necessary. Fuel tax revenues, the primary financing mechanism for state transportation projects, are eroding substantially. Fuel tax rates in most states are not indexed to inflation, and lawmakers in most states have not raised fixed per-gallon rates for years. The same can be said for the federal gas tax. Other factors contributing to the gas tax’s growing ineffectiveness include more fuel-efficient vehicles thanks to federal Corporate Average Fuel Economy standards putting pressure on manufacturers, plus more electric and hybrid cars on the roads, which pay little, if any, gas taxes. Left with few options but to raise an unpopular gas tax, states are desperately searching for alternative transportation revenue sources.