Home
/
Insider
/
•••
Share
Recently, gender pay equity policies have been hot button issues at the federal and state levels. Although the wage gap largely depends on the worker's industry and experience, Census Bureau data from 2015 shows that women generally earned 79.6 cents for every dollar a man made. As lawmakers discuss ways to close the gender wage gap, several states and cities have already taken action by prohibiting a common hiring practice among employers: asking about an applicant's salary history.

Equal-pay advocates argue that employer questions regarding salary history place female applicants in an unfair position relative to their male counterparts due to the difference in negotiating tactics between genders, and that the effects of starting at a lower salary can be compounded over time because potential employers often use past earnings to determine future salaries. Studies suggest that men are more likely than women to negotiate salary offers, resulting in lower starting salaries. These findings have motivated state lawmakers to introduce legislation that aims to correct a fundamental source of gender wage disparity.

In 2016, Massachusetts enacted the first piece of legislation (MA SB 2119) — set to take effect in 2018 — banning employers from requiring that job candidates disclose salary information upon hiring. In January, Philadelphia enacted a ban, scheduled to take effect this month, pending the result of a lawsuit, that would ban all employers from inquiring into an employee's salary history. New York City followed suit passing their own ordinance applicable to all employers in April. In Congress, Representative Rosa DeLauro (D-CT) and Senator Patty Murray (D-WA) introduced two bills (US HR 1869 & US S 819, respectively) this year proposing a federal prohibition on mandatory salary-history sharing.

So far, state lawmakers in 39 states have introduced legislation related to pay equity, with 23 states considering bills that specifically include provisions addressing salary history. Bills in Illinois (IL HB 2462) and Oregon (OR HB 2005), in particular, include provisions that would bar employers from inquiring into a potential employee's salary history, and have both passed their respective first chambers. In New York, two bills (NY SB 5233 & NY AB 6707) have garnered attention in Albany for following the lead of New York City's prohibition. 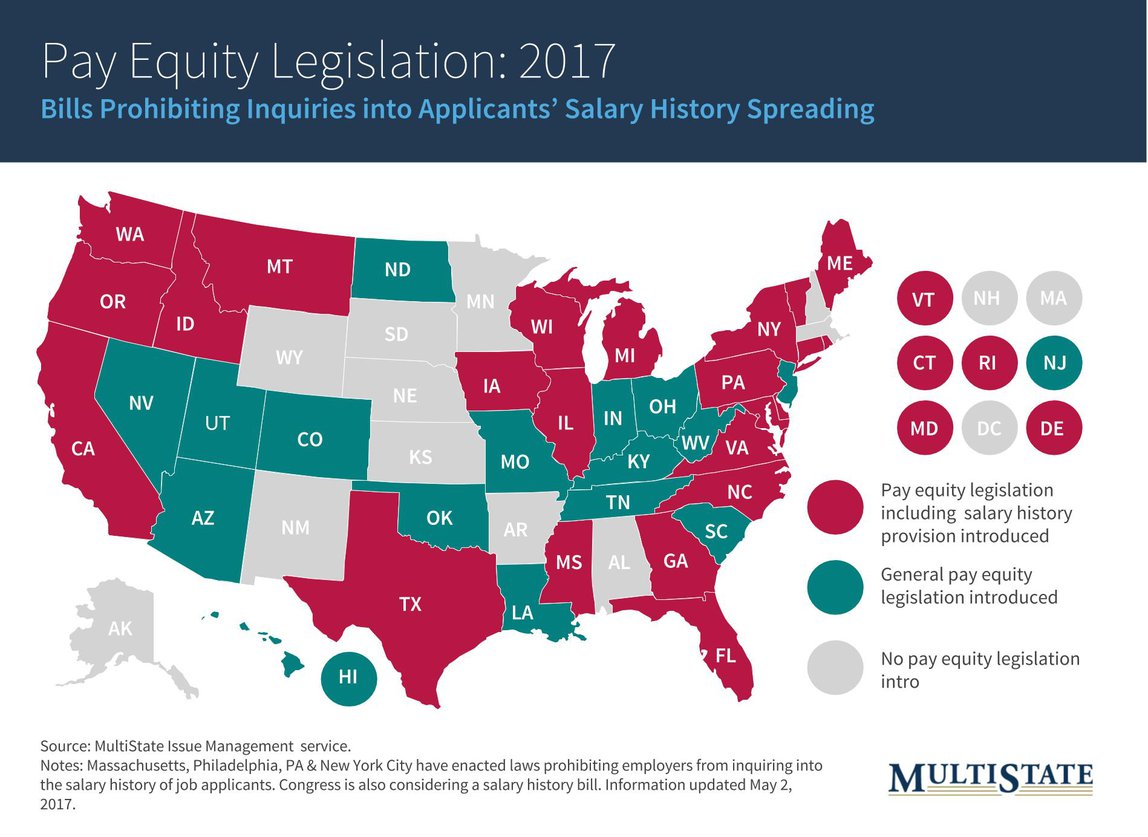 Employers and other critics of salary history bans argue that federal gender-based pay discrimination laws already exist and imposing limitations on what an employer can and cannot say violates the First Amendment. Proponents, however, say that banning employers from asking about salary history gives women a more level playing field and helps prevent the wage gap from growing throughout a woman's career.

Pay equity remains a glaring problem in America, and policymakers on the federal, state, and local levels will continue to introduce legislation and debate how to correct the issue. But because these salary history laws are relatively new, there is not much data or research pointing to their effectiveness in closing the wage gap, though there could be more research coverage as data from early adopter states, like Massachusetts, become available. In the meantime, expect lawmakers to continue discussing new approaches to closing the wage gap for the foreseeable future.