The 2021 state legislative sessions have seen a rapid evolution in proposals seeking to tax the digital economy. In years past, the prototypical bill in this space would have sought to apply an existing tax — typically the sales tax — to a digital good or service that had a taxable “tangible” equivalent, such as pre-written software or video streaming. This year these “traditional” bills were eclipsed by a wave of novel tax policies that seek to levy new taxes on different facets of the digital economy.

To put this into numbers, there were 14 “traditional” digital tax bills across a dozen state legislatures. Conversely, 10 states considered 27 bills taxing either digital advertising or social media, and five states reviewed nine bills taxing revenue derived from the sale or collection of user data (sometimes referred to as data sale or data mining taxes). 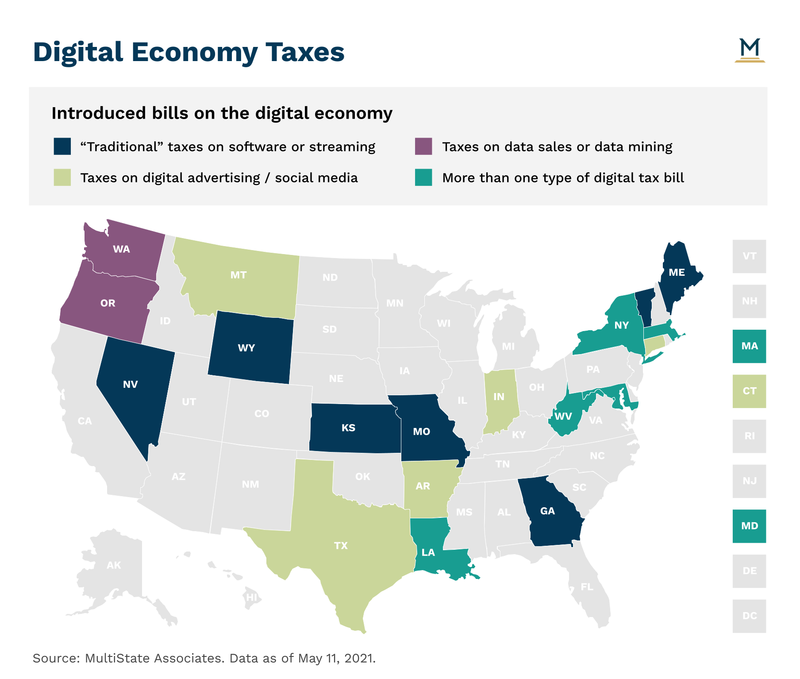 In many ways, this new wave of “tech tax” bills was whipped up following the 2020 publication of a New York Times opinion piece that called for states to levy targeted taxes as a way of reining in “Big Tech.” Most of these new breeds of bills died on the vine, but Maryland became the first and — so far — only state to enact one when the legislature overrode Governor Horgan’s veto of HB 732 as a part of a wider education reform package. This legislative breakthrough, coupled with lawmakers’ increasing focus on large tech companies, led to the expansion we are seeing.

Although Democrats are usually more likely to favor tax increases, these tech tax proposals have had Republican interest as well, with roughly 40 percent of these bills coming from Republican sponsors. While both parties have shown openness to these new taxes, their rationales tend to be different. Democratic efforts to tax tech seem to arise because those lawmakers believe that larger tech companies either are not “paying their fair share” or that these taxes demonstrate how states will exert greater authority over those firms in the face of allegedly lax federal regulation. Republicans, by contrast, often seem to couch their efforts as a means of punishing Big Tech for perceived bias. We have not yet seen Democrats and Republicans in any state setting aside their partisan differences to develop bipartisan proposals.

Despite this legislative proliferation, these ideas have not demonstrated sufficient political support to become official policy. With the exception of Maryland’s digital advertising tax, most of these bills have not made it out of their first committee let alone become law. The digital advertising proposals also must survive a significant legal challenge (though that has not stopped Connecticut Democrats from pushing for an identical proposal).

Regardless, the tensions between some lawmakers and Big Tech seem to grow everyday, so it is likely that eventually a state legislature will develop a targeted tax policy that has sufficient political support and can pass legal muster. If such a policy should arise it could well spread among like-minded states, as these things tend to do.