Last week, Louisiana Governor John Bel Edwards (D) signed a bill (LA SB 138) into law making the Bayou State the 42nd state to enact marketplace facilitator legislation. We have been following the steady adoption of this policy for some time, but in the wake of the COVID-induced recession — with overall sales tax revenues down markedly, but online sales up 128 percent — the issue has taken on new urgency for many lawmakers, as these bills require marketplace sellers — companies that facilitate sales over their platform by others — to collect sales taxes. 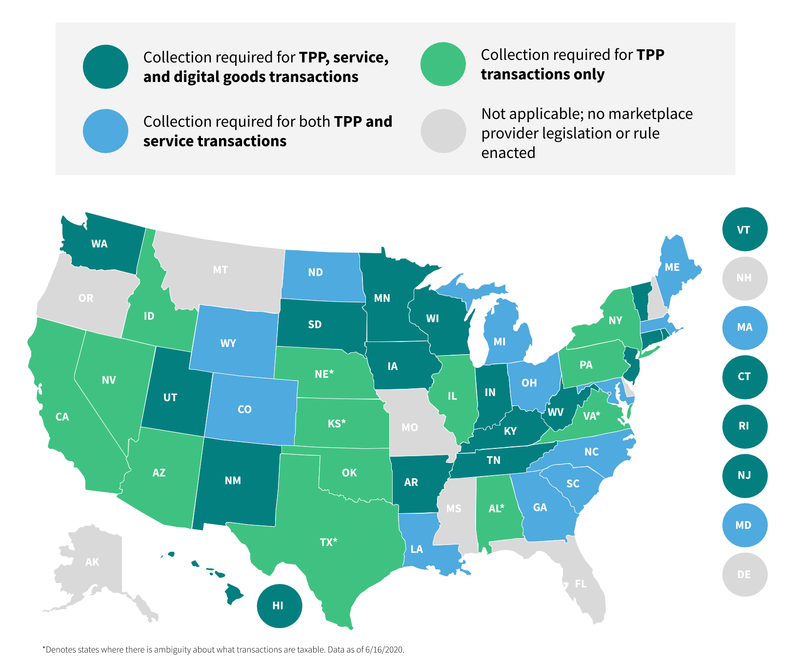 Other distinctions include whether there is a minimum threshold of sales before a marketplace is required to collect tax (every state but Kansas), how those thresholds are calculated (total sales and/or number of transactions, and the time period for calculating those), and which businesses are defined as “marketplace facilitators.”

The Multistate Tax Commission (MTC) and the National Conference of State Legislatures (NCSL) have both been working to create guidance to help states create more uniformity, but lawmakers were reluctant to reopen debate on such recently enacted legislation even before the pandemic. Now that states are facing historic revenue shortfalls and more aggressive tax reform efforts are on the table, it seems even more likely that policy members will hold off on making technical amendments to existing marketplace facilitator laws.

While we are not expecting amendments to existing laws in the near future, we continue to keep a close eye on the last few holdout states to see if they will enact legislation of their own. Mississippi will almost certainly be the next state to join the ranks, as its marketplace bill (MS HB 379) cleared both chambers on June 12 and Governor Tate Reeves (R) is expected to sign it. Beyond that there are only two states left that impose a statewide sales tax which have not yet required marketplaces to collect: Florida and Missouri. Governor Ron DeSantis (R) has expressed his philosophical objections to requiring online platforms to collect the sales tax, but it is possible that the economic downturn could lead to a change of heart. Missouri lawmakers have tried several times over the last two years to pass bills of their own (they introduced nine this year alone), but political factors have continued to bedevil those efforts. The Show-Me State will likely pass their version eventually, but it’s difficult to forecast exactly when that will be.