The COVID-19 pandemic coincided with a major election in 2020, which left states scrambling to amend voting laws — particularly around absentee/mailed ballots — to allow electors to cast their ballots safely. Balancing access to the ballot with security concerns is a major issue for state policymakers before the 2022 elections. This is the second installment of a three-part series covering current election laws and recent legislation to amend these laws. Read our first installment: How Do States Address Voting Registration and Eligibility? This series pairs with MultiState's State Voting and Election Laws Landing Page and Dashboard, where we’ll be keeping track of this vital issue moving forward.

Last week we examined: Who is eligible to vote? And how can eligible voters register for upcoming elections? This week, the questions we’ll tackle while examining voting and election laws in the states are: Who is eligible to vote by absentee/mailed ballots? And what are the rules surrounding absentee/mailed ballots? So far, state lawmakers have introduced over 500 bills addressing absentee voting and over 300 bills on mail-in voting.

Even before the pandemic hit, five states ran their electoral system almost entirely through mail ballots. Every registered voter in Washington, Oregon, Hawaii, Utah, and Colorado receives a mail-in ballot by default. Voters then submit completed ballots by mail or deposit them at designated drop sites. 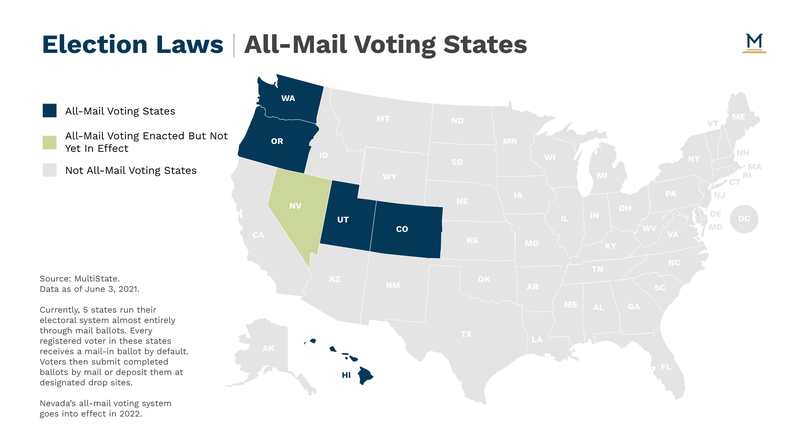 Yesterday, Nevada Governor Steve Sisolak signed legislation into law (AB 321) to enact all-mail voting in Nevada. The law requires registered voters in the state to opt-out if they do not wish to receive a mail-in ballot. Similar to other all-mail voting states, electors may still choose to vote in person on election day if they prefer. When the law goes into effect in 2022, Nevada will become the sixth all-mail voting state.

Currently, 34 states allow electors to vote by absentee/mail-in ballot without additional qualifications or excuses to do so. The remaining states require a reason for a voter to cast a ballot by mail instead of in person. 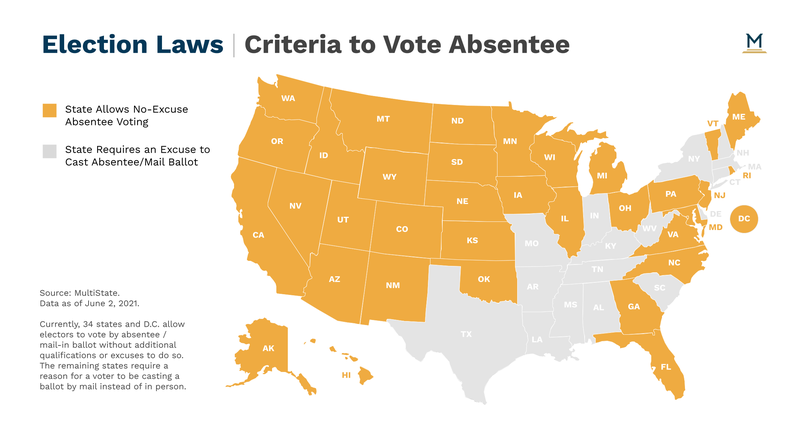 Eligible electors that wish to submit an absentee/mail ballot must submit a request to receive an absentee/ballot by a certain date. This deadline varies by state but is generally in the 7-14 day range. 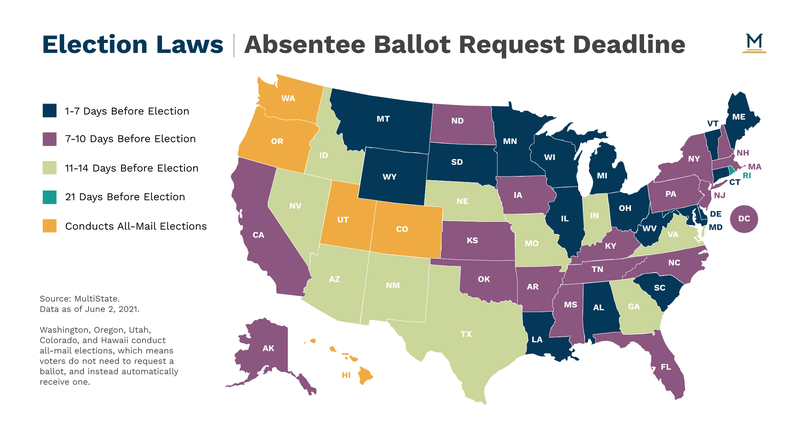 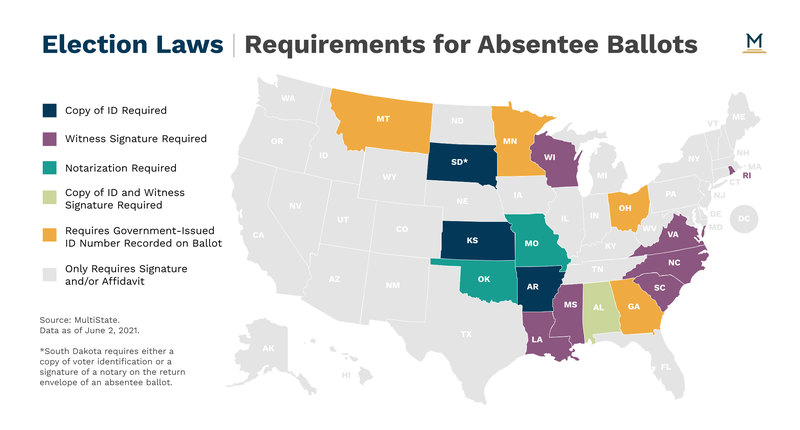 Among other provisions, Georgia’s 2021 election law (SB 202) requires electors returning an absentee ballot to, in addition to swearing an oath printed on the absentee ballot envelope, include either the elector’s driver's license number, state ID number or, if the elector does not have any of those documents, a copy of an acceptable voter ID. 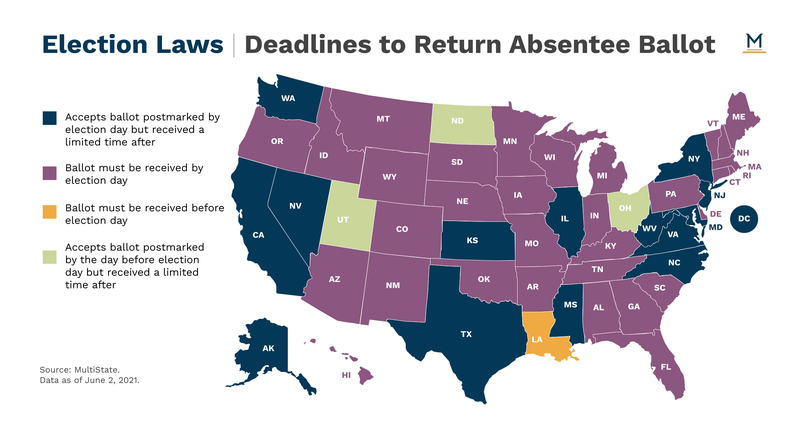 Indiana enacted a law this year (SB 398) that extends the time that absentee ballots must be received from noon to 6:00 pm on the day of the election. Indiana does not accept postmarked ballots that arrive after election day.

Under the all-mail voting system that Nevada will implement in 2022 after passing legislation this week (AB 321), mailed ballots must be received by 5:00 pm on the fourth day following an election. Under the current system, absentee ballots must be postmarked by election day and received no later than 5:00 pm 7 days after the election.

In response to the COVID-19 pandemic, many states allowed temporary use of ballot drop boxes located throughout the state. Several states have already enacted statutes or rules allowing drop boxes in future elections and rules surrounding drop box security. We anticipate this being an active legislative issue before the next major election in many states. 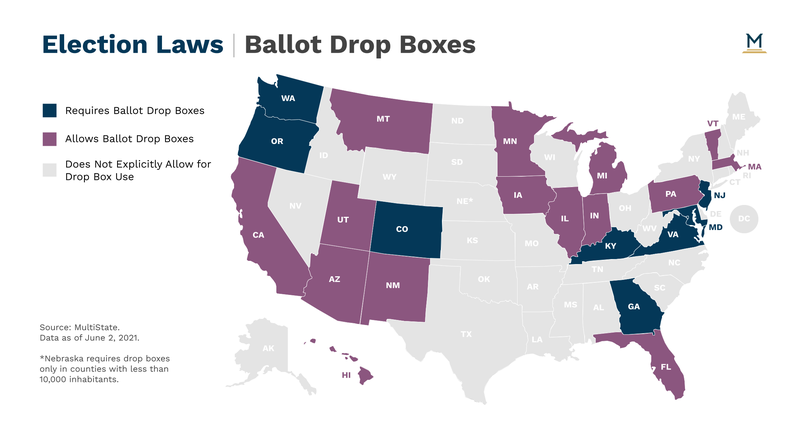 While many states may implicitly allow ballot drop boxes following the 2020 pandemic year elections, a little over a dozen states have passed legislation in 2021 to explicitly allow ballot drop boxes. A key difference here is whether a state simply allows a county to use drop boxes or requires drop box use. Some states explicitly limit the number of drop boxes that may be used per jurisdiction (e.g., Iowa and Georgia) while others set a minimum number of drop boxes that must be used per jurisdiction (e.g., Colorado and Kentucky).

Next week’s third and final installment of MultiState’s election laws blog post series will cover legislation around in-person voting. In the meantime, check out MultiState's State Voting and Election Laws Landing Page and Dashboard, where we’ll be keeping track of this vital issue moving forward.