In recent years investors and technologists have devoted significant focus to cryptocurrency and blockchain technology, but state capitols have been much slower to engage. Most states had only nibbled around the edges of crypto and blockchain policy. But this year we’re seeing an uptick in legislation aimed at different aspects of this emerging technology.

Wyoming is one of the few states that have embraced cryptocurrency and blockchain technology. Beginning in 2016, lawmakers in Cheyenne have been regularly introducing and enacting legislation to create regulatory frameworks and incentive structures for the cryptocurrency market. These laws include measures to exempt virtual currency from property taxation (WY SB 111) in 2018; to relieve individuals associated with blockchain administration from certain securities regulations (WY HB 19) also in 2018; to create an intangible personal property rubric for cryptocurrencies (WY HB 62) in 2019; and to specify that digital assets are property within the Uniform Commercial Code (WY SF 125) also in 2019.

Other states are looking to catch up to Wyoming. Since this relatively slow start, there has been a significant uptick in legislative attention and debate around these issues. Most of those bills have sought to provide a legal and regulatory framework for cryptocurrencies — including licensure of brokers, incorporating in the Universal Commercial Code (UCC), etc. — or establish legislative studies of the issue, but some states have gone further and have started to experiment with other policy aspects. 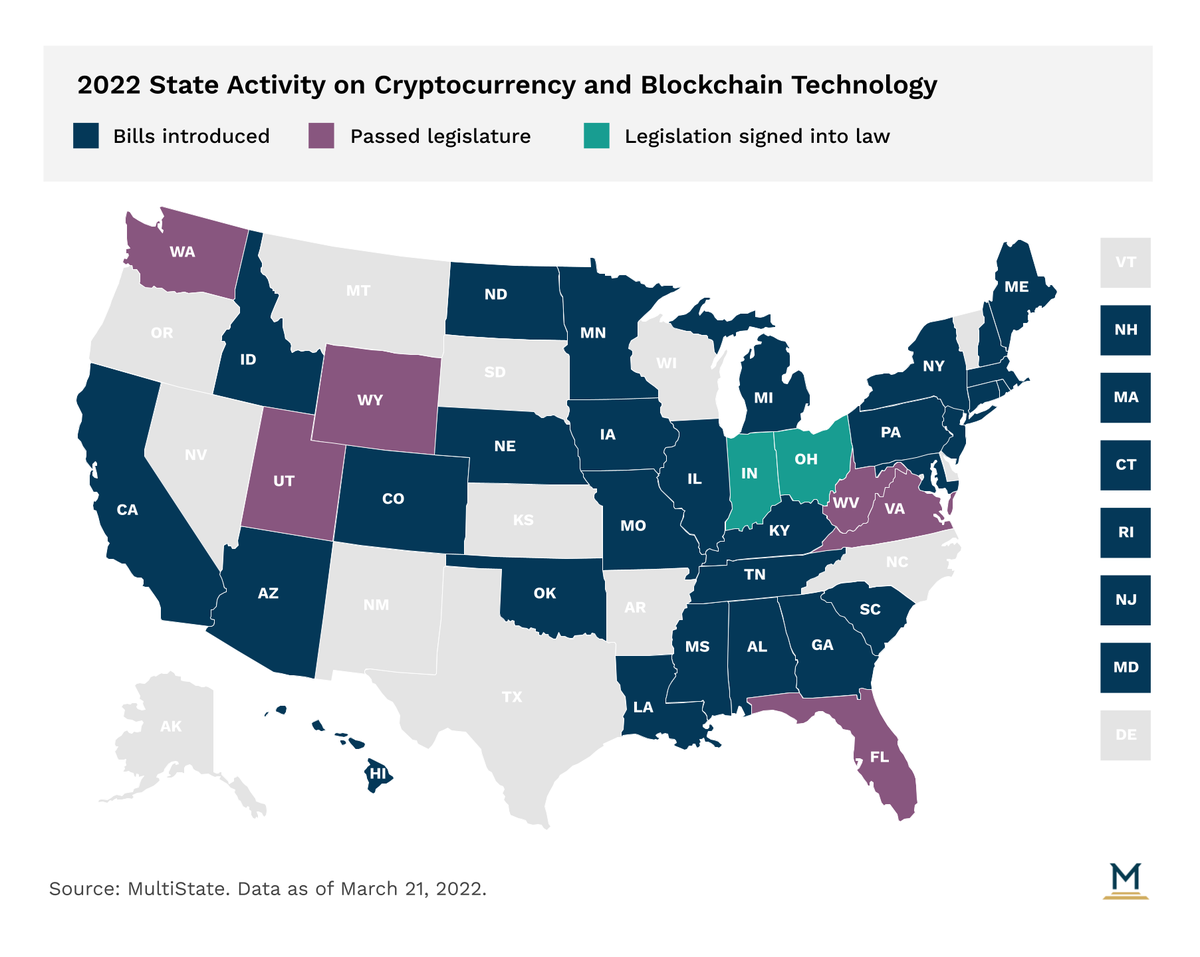 One of the most prominent steps states have taken is to explore allowing citizens to make at least some payments to state agencies using virtual currencies. In 2019, Colorado enacted the Digital Token Act, which cleared some regulatory hurdles and allows Colorado businesses to transact in “digital tokens” more easily. This year, Governor Polis’ (D), a crypto enthust, announced that the state will become the first state to accept cryptocurrency for tax payments as well as payments for certain licenses and state fees. While Colorado is the only state so far that has committed to crypto payments, we are currently tracking 13 bills in ten states that would provide similar authorization. Additionally, as we’ve written about previously, five states have expressly approved cryptocurrency use for political campaign donations.

Crypto in the Tax Code

Kentucky lawmakers fall into the incentives camp. In 2021, lawmakers in Frankfort enacted a pair of cryptocurrency incentives bills. The first (KY HB 230) provides a number of statutory definitions for the industry and establishes a sales tax exemption for equipment and electricity used by mining enterprises. The second new law (KY SB 255) provides further incentives for organizations that made minimum investments in cryptocurrency facilities.

Arizona has perhaps been the most creative with its legislative approach, introducing bills unlike those we have seen in any other state this year. The House passed a bill (AZ HB 2204) that awaits action in the Senate, which would provide an income tax subtraction for cryptocurrencies, non-fungible tokens (NFTs), and ”gas” fees (which, generally, are levied as a price of conducting transactions on some blockchain systems). Going even further, another bill (AZ SB 1128) would fully exempt virtual currencies from property taxation.

Finally, Arizona lawmakers have introduced a bill (AZ SB 1341) that would designate Bitcoin as legal tender; they are not only the first state to propose taking this step, they are also the only state to propose preferencing one cryptocurrency over all others.

While most of these bills provide credits for the crypto market or, at least, don’t impose fiscal or regulatory burdens, there are notable exceptions. A Wyoming bill (WY HB 113) would levy a $.0002 tax on commercial entities that engage in digital asset custodial services. Two pairs of New York companion bills (NY AB 9086 / SB SB 7272 & NY AB 7389 / SB 6486) would add new reporting requirements for cryptocurrency holders and place a moratorium on proof-of-work validation processes in addition to requiring cryptocurrency operations to become subject to environmental impact reviews.

Based on this analysis, one thing that’s clear is that state lawmakers are still in the process of working out how to think about this emerging sector of the economy. The preponderance of study bills or the establishment of basic frameworks over more directed policy goals points in this direction, as does the fact that this issue doesn’t currently have a partisan valence. In Arizona, lawmakers used the 2021 legislative session to enact legislation (AZ HB 2544) to join a dozen other states in forming an official cryptocurrency study group.

In our increasingly polarized environment, it’s unusual to see an issue that is embraced equally by both sides of the political spectrum, but there is an almost even split between Democratic and Republican interest in cryptocurrency: blue states are just about as likely to have introduced crypto legislation as red states and Republican lawmakers are just about as likely to be the sponsor as Democrats.