While the number of bills seeking to tax the digital economy dipped in 2022, it seems likely that this number will rebound in 2023. Last year we argued that the rise of efforts to tax on “Big Tech” was one of the most significant fiscal policy trends moving forward and would continue to shape the legislative landscape in future legislative sessions, despite the numerous political, policy, and legal problems with these kinds of bills.

Why Did We See Fewer Tech Tax Proposals in 2022?

In 2021, 19 states considered more than fifty bills taxing the digital economy, with more of these introductions seeking to levy novel taxes on things like digital advertising or data mining, rather than more traditional ideas like taxing software or streaming. However, this year the number of newly introduced bills fell by more than half and the number of states considering those efforts dropped to 11. 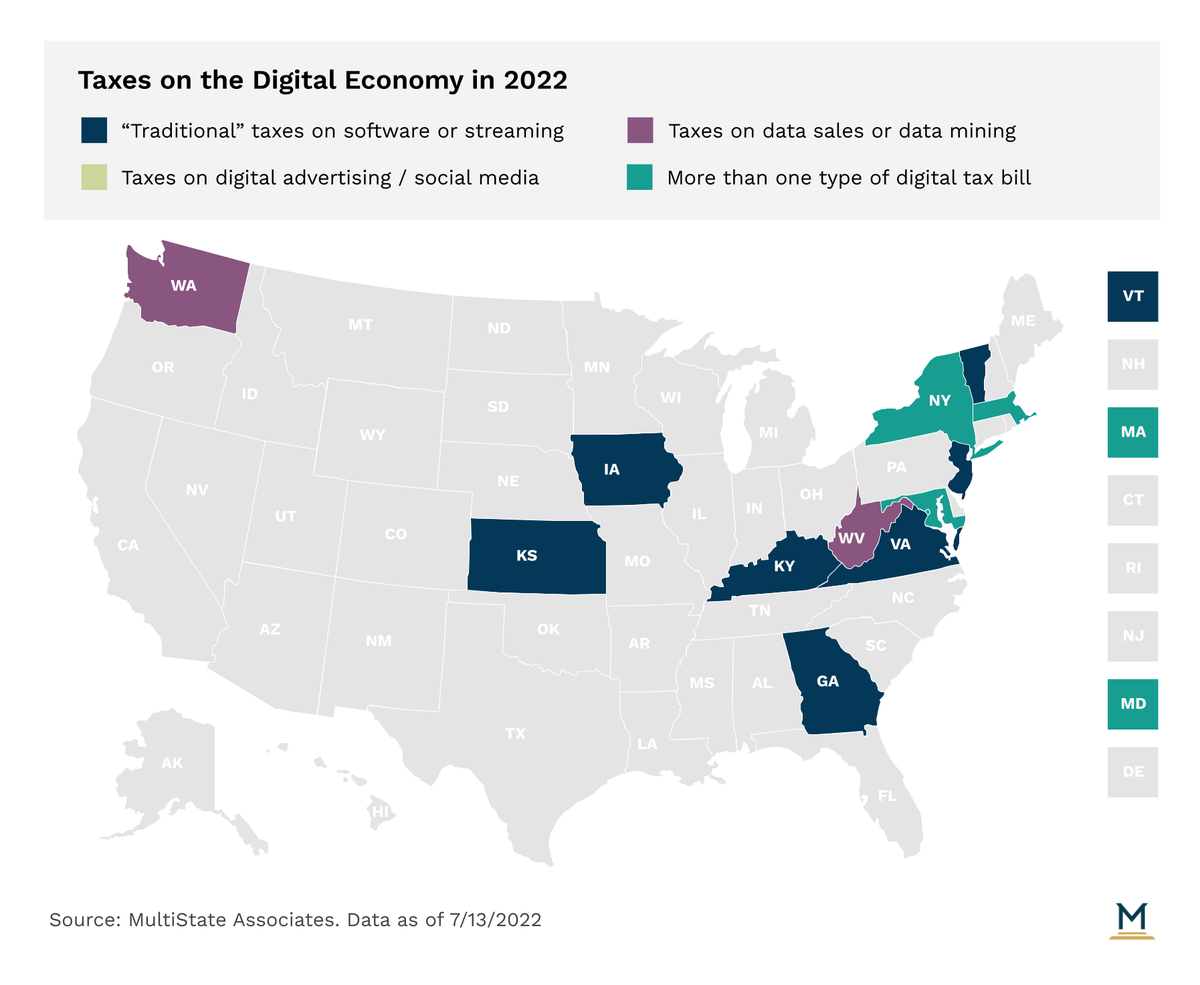 The reason for this drop likely comes down to ideas we’ve expounded on elsewhere, namely that a number of fiscal and political factors made efforts to levy new taxes less viable this year. First, states are less inclined to introduce tax legislation during an election, with the number of proposed bills typically falling by around 30 percent. Unless fiscal considerations require it, lawmakers generally shy away from amending the tax code when they are about to face voters.

Second, states enjoyed an historically strong revenue environment this year that further reduced any political interest to levy new taxes. Raising new tax revenue is almost always an uphill political battle, but advocates for increases will often say that their policies are necessary to meet a fiscal challenge like balancing a budget or paying for a new program. But in 2022, with state coffers flush due to better than expected collections and bountiful federal aid, it was nearly impossible to argue that tax increases were a fiscal necessity.

Finally, tax policy takes time and the development of clear tax policy — particularly on a novel issue — takes even longer, and lawmakers were eager to get onto the campaign trail ahead of this year’s hotly contested elections. It is a relatively straightforward process to develop a bill to increase the sales tax rate by one point: the language is simple to write and debate can proceed with minimal explanation because the policy implications are widely understood and require less legislative explanation. Levying an entirely new tax on something as complicated and nuanced as data mining, for instance, entails a more complex drafting process, greater input about feasibility from taxing authorities, and a more protracted debate process as lawmakers need to be informed about a wider array of fiscal variables.

Despite this year’s dip, the legislation we did see suggests that the underlying interest remains, even if the external political forces reduced bill introductions.

For example, Maryland made national headlines when they enacted their digital advertising tax last year, but an immediate legal challenge chilled most other states’ interest in following Maryland’s example. Lawmakers in Massachusetts, however, were less deterred by these jurisdictional roadblocks introducing and debating five digital advertising tax bills (HB 2894, HB 2928, HB 3081, HB 4042, & HB 4179) even after the Maryland litigation began. These bills never made it out of committee, but that five different sponsors fought for five bills is a show of support for a policy originally conceived as a way for states to regulate “Big Tech.”

Similarly, there was notable activity this session around new taxes on the use or sales of aggregated data, despite the total number of bills falling. These included some relatively brief bills establishing new excise taxes in Massachusetts (SB 1938), New York (SB 4959), and West Virginia (HB 2148) that, despite the fact that they were seeking to establish an entirely new kind of tax, were light on the specifics about how the taxes would actually be administered. By contrast, Washington lawmakers worked on three bills (HB 1303, HB 1850, & HB 2107) that were each more than 30 pages and that devoted more time to laying out the specifics of how the new policy would work. As with the digital advertising bills, these taxes on data never gained political traction, but the fact that these Washington lawmakers were willing to put in the time and effort to wrestle with a novel policy suggests that they are not done pursuing it.

Apart from these specific legislative actions, a number of prominent state leaders have made statements this year indicating that they remain wary of the technology industry and might be amenable to further action in the future. The rationale behind these statements varies — from conservatives making accusations of censorship and progressives arguing for higher taxes and greater privacy — but they all speak to a coalition of prominent lawmakers who are increasingly comfortable with legislation aimed at Silicon Valley.

Looking at the legislative efforts of the last few years, it is clear that some lawmakers want to continue exploring ideas for taxing the tech industry. Given the ongoing lawsuit against the Maryland advertising tax and the unresolved complexity of a data tax, it seems likely that these lawmakers have not yet landed on a policy slate that can survive both legal and political muster. Whether they find such a policy in the coming years remains to be seen, but we will be watching closely to see if they do.