Although Democrats failed to flip control of any state legislative chambers or governorships last week (as of this writing, votes are still being tabulated for races in the Arizona House), they are nevertheless in a slightly stronger position heading into redistricting than they were a decade ago. Over the last ten years, Democrats have gained full legislative authority in several high-population states (such as New Jersey, New York, and Virginia) and have broken Republicans’ hammerlock in key swing states like Michigan and Wisconsin.

(*States where a party once held trifecta control, but now legislative control is divided.)

In addition to looking at the raw number of states, it is important to also consider the nature of the states that have shifted. Republicans gained trifectas since 2011 in, with the exception of New Hampshire, eight solidly red states, where further entrenching Republican advantage is unlikely to lead to marked policy change (or new congressional seats). Democrats’ nine new trifectas also include several decidedly blue states, but also Maine, Nevada, and Colorado: states that are now or were recently considered presidential swing states. Additionally, these new Democratic state trifectas will draw the district lines in 73 congressional districts compared to 25 in new Republican trifecta states. 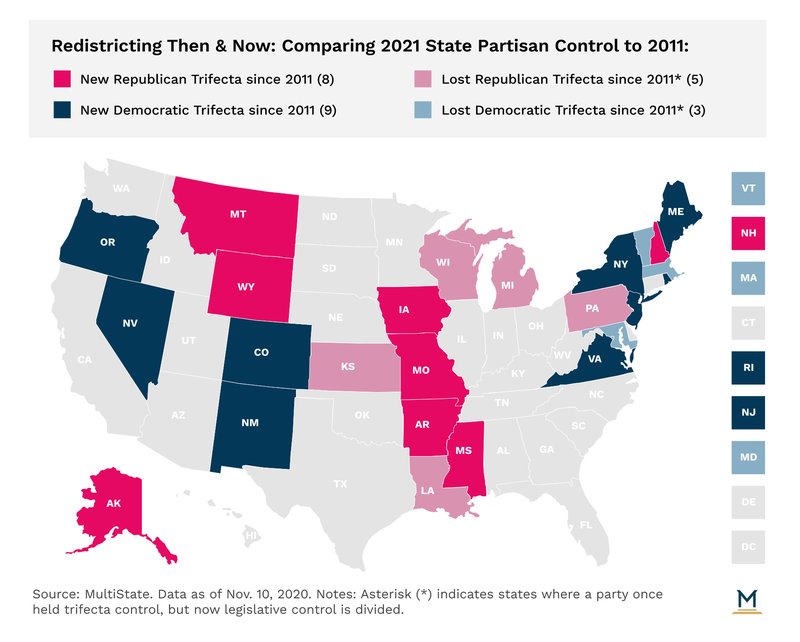 Several established Republican trifectas were also broken up with the election of Democratic governors. Under other circumstances, the Wisconsin legislature could attempt to draw a map that cements their control over the legislature for another ten years, but the presence of Democratic Governor Tony Evers means that they would have to moderate those ambitions in order for their maps to become enacted. Governor Whitmer in Michigan is in a similar position, although that state’s independent redistricting commission makes the politics a bit more complicated. The possibility of more bipartisan maps in these states mean that Democrats have a greater chance to get elected in future cycles, particularly considering that both states voted for Joe Biden on November 3.

As a matter of pure political interest, the parties are incentivized to maximize their advantage by drawing district lines that are as favorable to them as possible within constitutional limits. If a single party has full control over both legislative chambers and the governorship, they can follow this instinct as far as their state’s political geography allows. This is not to say that leaders will always draw maps to deal the most damage to their opposition — several states, for example, have begun leaving their mapmaking to independent commissions or the judiciary — but the more control a single party has over the process, the more likely they are to embed new advantages into the system for their side.

These maximalist efforts will be hampered by each veto point that can stymie a party. A legislature under control by one party may want to pass a highly-partisan redistricting plan, but if the governor is from the opposition and has veto authority over the final map, the legislature will be forced to compromise and the final map will likely not be as advantageous for a single party as it might otherwise have been. This is not to say that maps from states with divided governments are “better” or more “fair,” only that they are less likely to produce a maximum advantage for a single party.

However, not all broken trifectas are created equal. While a Democratic governor in Wisconsin could veto Republican legislative maps that they oppose, the GOP-held legislature in Kansas has a supermajority and so can pass any map they please regardless of any objections from Governor Laura Kelly (D). In North Carolina, Republicans do not have a supermajority, but state law gives the governor almost no authority over redistricting, effectively sidelining Governor Roy Cooper (D) from the process. Veto authority is also sometimes not absolute, as in Pennsylvania where Governor Tom Wolf (D) will be able to exercise veto control for new congressional district lines but not state legislative district lines. Finally, as mentioned, Michigan and Virginia, along with several other states, have adopted independent redistricting commissions, which are intended to keep either party from putting their thumb on the scale.

Redistricting is not destiny and politics are messy, so none of this is to say that Democrats will pick up seats in statehouses or Congress. But as things stand now, Democrats are in a better legislative position than many commentators give them credit for.