MultiState is your source for up-to-date and accurate election results and analysis. Bookmark this page for updated maps on partisan breakdown of state governors and legislatures pre- and post-election, plus analysis on the races and key ballot measures from our MultiState Insider blog. Click the button to download our 2020 Pre-Election Briefing Deck.

On November 3, 2020, voters will go to the polls to elect 5,877  state representatives, 11 governors, and 114 statewide ballot measures. While much of the media attention focuses on the presidential and congressional races, these state-level elections will determine public policy close to home for every American. MultiState will keep track of these important elections, their political consequences, and potential policy changes for 2021 and beyond.

However, while politicos continue to forecast political headwinds in the Democrats’ direction, 2020 does not appear to be a year where Democrats will gain much ground when it comes to governorships. There are only eleven gubernatorial races in 2020 (down from 36 governor races in 2018). Six of which are projected to be safe seats for the incumbent party (Utah, Indiana, West Virginia, and North Dakota for Republicans and Washington and Delaware for Democrats) and only one governor's race — the election in Montana to replace term-limited Democrat Steve Bullock — is rated as a “Toss-Up.” The next closest race according to forecasters is North Carolina’s Democratic incumbent Roy Cooper, which is currently rated as “Lean Democrat.” The three additional governors races (Missouri, Vermont, and New Hampshire) are all currently held by Republicans and are rated as “Likely Republican” by forecasters. 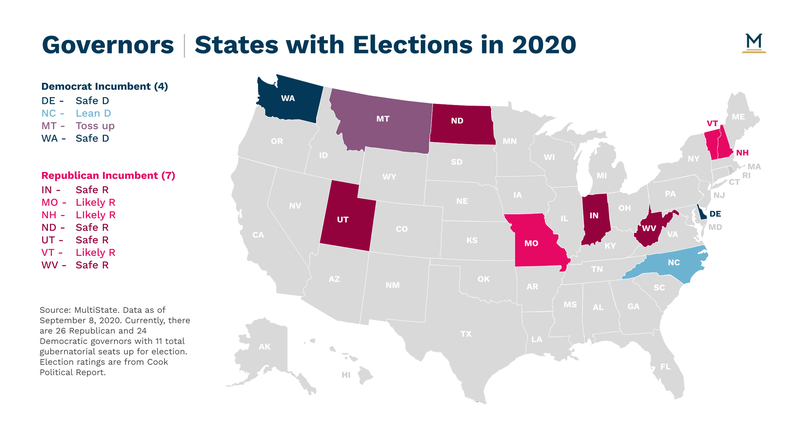 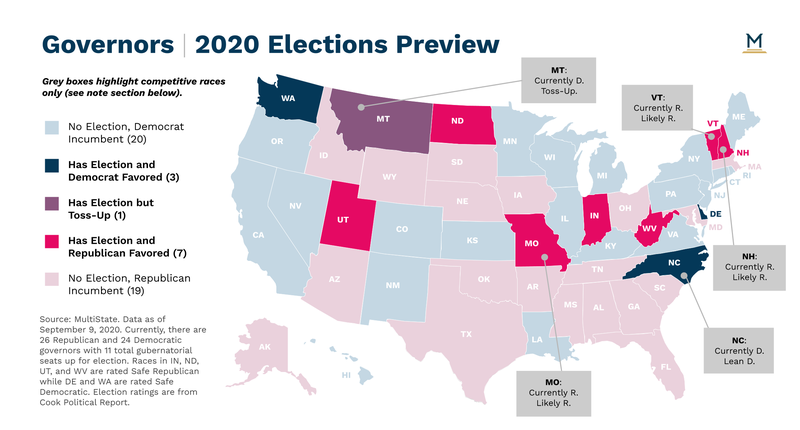 But how might this all shift after the 2020 elections? There are 5,877 (out of 7,383) state legislative seats up for election on November 3. Using the projections produced by election forecasters CNalysis, there are six state legislative chambers currently held by Republicans that have the potential to flip to Democrats next year. The most likely is the Minnesota Senate, which CNalysis rates as Tilt Democratic.  Furthermore, both the Senate and House in Arizona, the Iowa House, and the Michigan House are all currently rated as “Toss-Up.” Finally, the Pennsylvania House and North Carolina House are rated as “Lean Republican” and “Tilt Republican,” respectively. 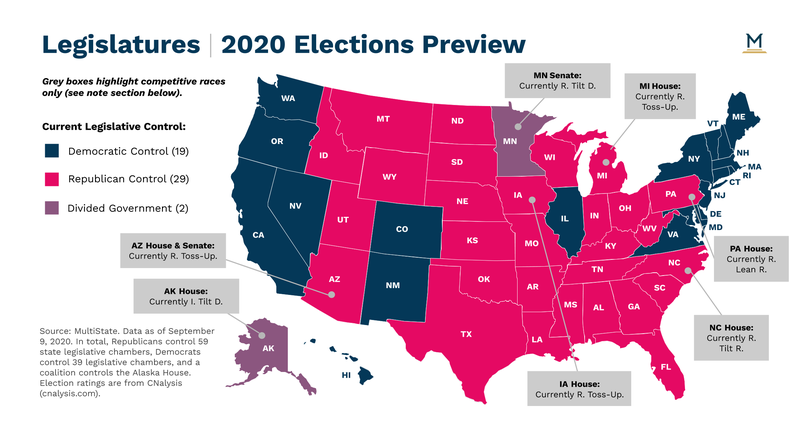 When a political party holds a supermajority of seats in a state legislature, that supermajority has the power to override gubernatorial vetoes as well as approve special measures (e.g., sending constitutional amendments to the voters) that require passage beyond a simple majority. Currently, of the 99 state legislative chambers, Republicans hold supermajorities in 30 chambers and Democrats hold supermajorities in 20 chambers. The remaining 49 chambers have one political party with a simple majority that cannot override the governor's veto of its legislation. 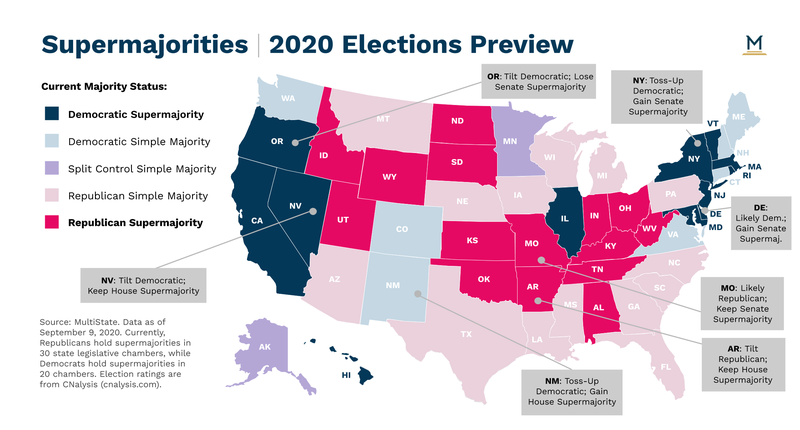 A political party holds a “trifecta” in a state when it controls both state legislative chambers as well as the governor’s office. Currently, Republicans have trifectas in 21 states, Democrats hold 15 state trifectas, and the remaining 14 states are under split control. When one party controls both the legislature and governor’s mansion in a state, that party has a clear path to pass preferred public policies without any major roadblocks from the opposition party.

On November 3, both parties will have opportunities to gain and break up political trifectas. If Democrats can win control of the Iowa House (“Toss-Up”) or either chamber in Arizona (both “Toss-Ups”), they will eliminate Republican trifectas in those states. Democrats also have a good chance of gaining a trifecta in Minnesota if they flip the Senate (“Tilt Democratic”). Republicans have a chance to add to their trifecta lead by winning the governors races in Montana (“Toss-Up”) or North Carolina (“Lean Democrat”). 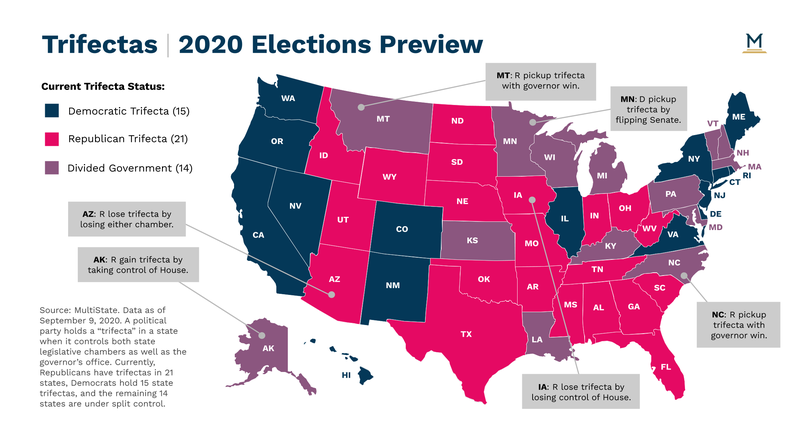 In 32 states, voters will be asked not only to submit their preferences for individuals running to represent them, but they’ll be asked to decide the fate of new laws or constitutional amendments directly. This form of direct democracy is often referred to universally as ballot measures.

Currently, 32 states have certified a total of 114 statewide ballot measures for the November 3 ballot. Mississippi will decide on a new state flag. Voters in Arizona, Mississippi, Montana, New Jersey, and South Dakota will decide whether to legalize marijuana for certain uses. Californians alone will see 12 statewide measures on their ballot (in addition to potential local measures), including high-profile measures to exclude rideshare drivers from a recent law (CA AB 5) that would classify them as employees and a measure that would expand the protections of the nation’s first major consumer privacy law. 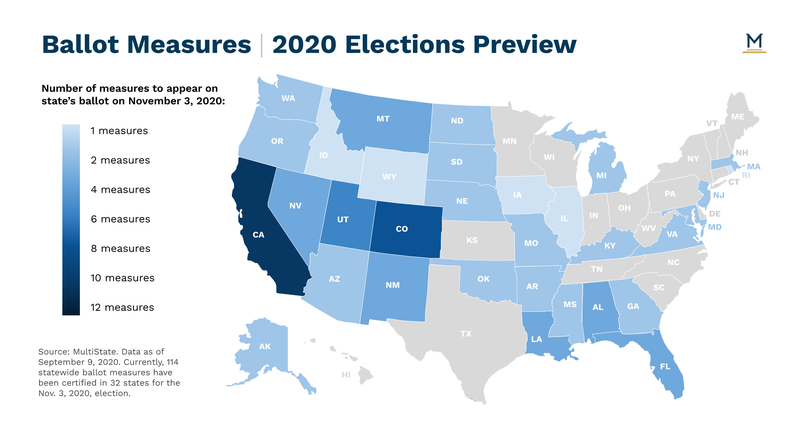