There’s a lot to think about when it comes to planning for next year, but MultiState is here to help. We created a 2021 Session Prep Toolkit that we’re rolling out in November and December to help you think through four major areas that are important to the success of your government affairs program. The content will follow the checklist here, and each week we’ll delve into a different aspect of state government affairs strategic planning. If you're just tuning in, catch up with the links below:

While not the Democratic sweep many pollsters were predicting, the 2020 elections still resulted in some changes to veto-proof majorities, trifectas, and, perhaps most importantly, committee chairs and legislative leaders. This week, we’ll walk you through the main aspects of states’ political landscapes, plus how to think through a stakeholder analysis to identify your allies and potential obstacles. 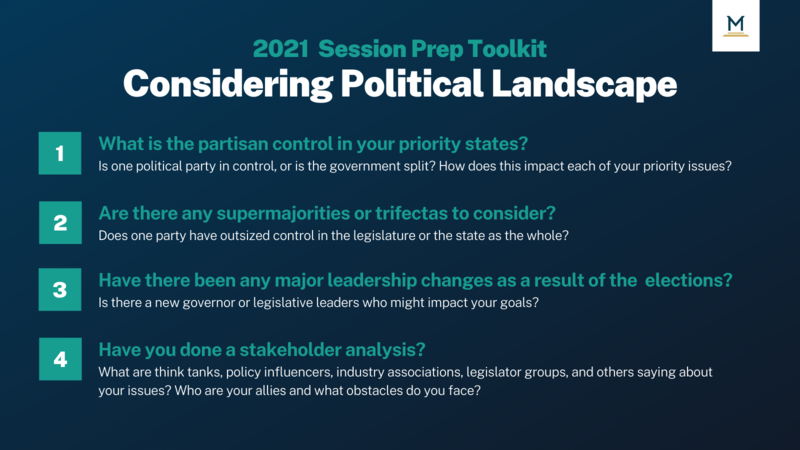 (1) What is the partisan control in your priority states?

You likely have a good idea of the position of each political party on your priority issues. As a result, the partisan control of both the governor’s mansion and the legislature can have a big impact on what you’re able to accomplish proactively and what policies you may have to defend against. Since you thought about your priority issues and target states last week, it’s now time to consider the legislative and gubernatorial control in those states and how this may impact your objectives.

After flipping a gubernatorial seat in Montana, there will be 27 Republican governors and 23 Democratic governors in 2021. Eleven states held gubernatorial elections in 2020, and the results in these races aligned with pre-election predictions. Only one race (in Montana) saw a party change from the incumbent Democrat to a newly elected Republican. For partisan breakdown maps post-election, check out our 2020 Election Results page.

The election results suggest that the political landscape across the states will look similar to 2020 in most states with the exception of New Hampshire, where Republicans flipped control of both the House and Senate, which should give Governor Sununu (R)’s veto pen a break. Had Democrats been able to flip control of chambers in Arizona, Michigan, and Minnesota, they would have been in position to pursue a more progressive agenda across a greater number of states in 2021. But, for now, Democrats will be limited to pursuing that agenda in the states where they already held trifectas. For the most current data on state partisan control, see our 2021 Governors and Legislatures Chart.

(2) Are there any veto-proof majorities or trifectas to consider?

Veto-proof majorities and trifectas can make or break what policies are enacted. This information should play a role in both your assessment of your target states and can help you predict where you may see unfavorable policy activity. 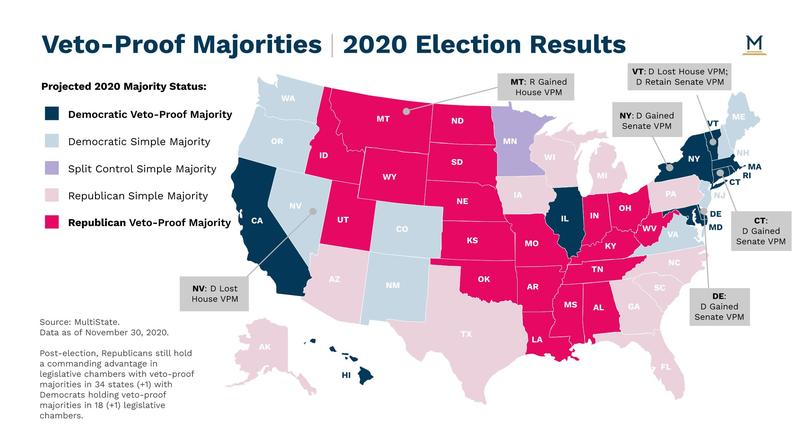 Similarly, trifectas can significantly impact the political climate in a state. When one party controls both the legislature and governor’s mansion in a state (a "trifecta"), that party has a clear path to pass preferred public policies without any major roadblocks from the opposition party. 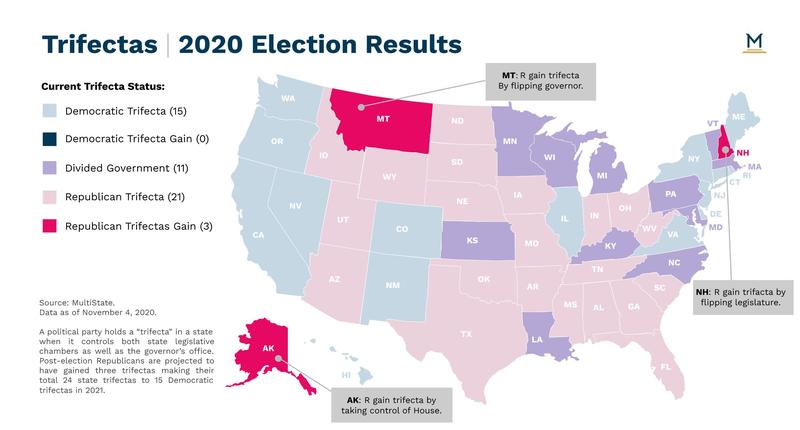 (3) Have there been any major leadership changes as a result of the 2020 elections?

The National Conference of State Legislatures (NCSL) defines “top leadership” as “the top political leader in a chamber,” or, in other words, the Speaker of the House or a Senate leader such as the Senate President, President Pro Tempore, Speaker of the Senate (Nebraska and Tennessee) or Majority Leader — the highest position differs by state. According to NCSL’s recent analysis, most of the big leadership changes this year didn’t come from chamber flips or upsets, but from volunteer resignations, retirement, or “terming out.” Top state leadership changes in a handful of states were unexpected due to primary or general election losses or flipped chambers.

However, it is still vital to research the influential leaders in your target states, determine their priorities, and create a plan to engage with them now. Most legislative leaders prepare an agenda of what they want to accomplish in the legislative session and usually share this with their majority members on the first day of the session. In some states where the legislative leader is of the opposite party as the governor, the leader may make their agenda public. If you want your priority issue on the leader’s agenda, now is the time to begin working with the leader, key legislators, and their staff to be included. Legislative leadership controls the process and the chamber floor and plays a pivotal role in determining what issues will be considered in the chambers’ upcoming session.

You should also be using this time to identify key legislators who are close to the leadership, who are willing to sponsor legislation on your priority issues, or to block legislation that would be detrimental to your issues. These are the legislators you can depend on at crunch time to get face time with the leader to make your case and ensure your concerns are addressed.

(4) Have you done a stakeholder analysis?

Any effective state affairs program needs a comprehensive plan for engaging with the policymaking community as a whole. A key component of that engagement is developing a strategic approach to the national membership organizations of policymakers which are collectively referred to as “the groups.” The groups provide opportunities for businesses and other organizations to engage with policymakers on priority issues and, more importantly, develop relationships with key state leaders without having to travel to every state in the country. Some groups have the ability to set policy precedents that individual states often follow with their own legislative efforts.

A sophisticated approach to an engagement strategy takes into account not only strategic goals and objectives, but also budgetary allocations, staff size and experience, and available time. The engagement strategy for a well-funded, well-established, and robust team will be different than for a newly formed state affairs program with fewer teammates and resources. The primary purpose, though, is the same for both: effectively and efficiently advancing priorities in the states. While groups engagement will involve less travel in 2020 as it did in past years, there are still meaningful opportunities to engage with the groups virtually (read more about that here and here).

Groups can be organized into a few main categories (please note that this is not a comprehensive list).

There are two parts to any comprehensive stakeholder engagement plan. First is a stakeholder analysis. A stakeholder analysis is both an inventory and a mapping exercise, in which you research which groups are active on your priority issues or have influence with your target audience. After you’ve determined the “who,” it is equally important to determine how these groups are engaging on your issues so that you may understand which groups could be helpful allies in the future and which may present obstacles.

Second is an outreach and engagement plan. How will you interact with these groups? Will you engage in protective outreach, setting up preliminary meetings to educate your target groups before any potential policy activity occurs? Or, will you take a more reactive approach? Thinking through these options for your priority issues up front will save you time and ensure you can be more nimble as the 2021 legislative sessions begin to move. MultiState can help you create a plan to engage the policy community. Read more about our Strategic Government Relations practice.

In our third installment of the toolkit, we’ll give you an overview of major issues we expect to see in the 2021 state legislative sessions so you’ll have all the context you need. A variety of competing issues will vie for lawmakers’ attention in 2021: state budget complications, the potential for new taxes, and pandemic response — plus other prominent issues such as police reform, privacy policy, and redistricting. Visit our 2021 Session Prep Toolkit for what to expect in the coming weeks.