Last February, we predicted that 35 states would implement marketplace legislation by the end of 2019. Although that sounded like an astounding number to some — going from 4 states to 35 in a single session — we actually underestimated the final total. Now, with Georgia having acted, 40 states have adopted marketplace laws and/or issued administrative guidance. State’s quick response to this issue led, naturally, to significant variability in the legislative language from state to state, especially with regard to who is a “marketplace facilitator.” Another key variable was the types of sales that are subject to tax collection by marketplaces.

States are responding to the 2018 U.S. Supreme Court decision in South Dakota v. Wayfair. In that case, the Court vitiated 50 years of precedent by finding that South Dakota could require a retailer without a “physical presence” in the state to collect sales tax. 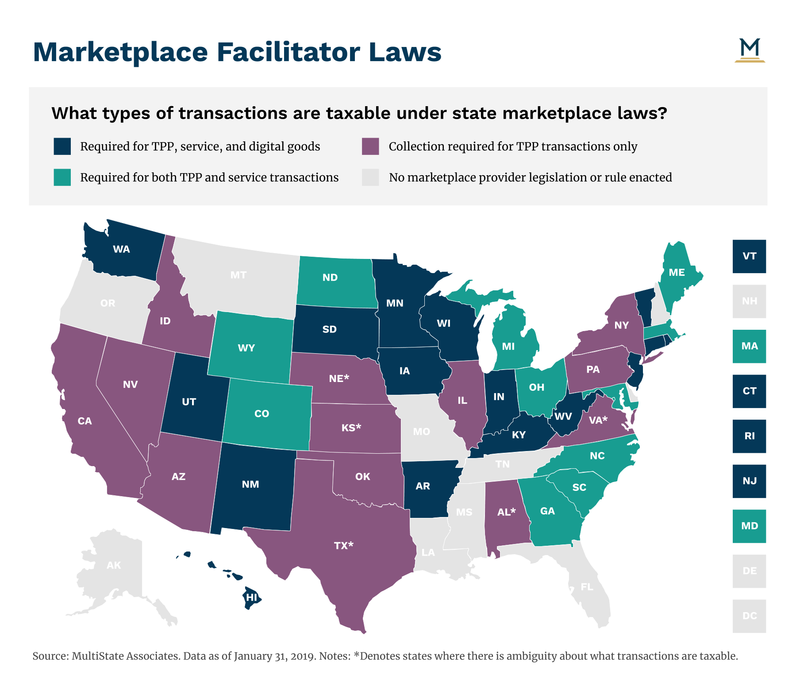 The map above underscores the different ways states have approached this issue and the patchwork of sales tax laws across the country. Recognizing the problems inherent in a system like this, a number of tax policy and non-governmental groups, like the Multistate Tax Commission (MTC) and the National Conference of State Legislatures (NCSL), spent time late last year creating guidance and model legislation to help state lawmakers establish a more uniform approach.

While I wouldn’t expect state efforts to amend their marketplace facilitator statutes with the same speed that they implemented them, I do think that a majority of states in the next few years will spend significant time implementing these proposed changes to create a more uniform set of sales tax laws across the country.