The COVID-19 pandemic coincided with a major election in 2020, which left states scrambling to amend voting laws — particularly around absentee/mailed ballots — to allow electors to cast their ballots safely. Balancing access to the ballot with security concerns is a major issue for state policymakers before the 2022 elections. This is the third and final installment of a three-part series covering current election laws and recent legislation to amend these laws. Read our first two installments: How Do States Address Voting Registration and Eligibility? and The Rise of Absentee/Mailed Ballots Post-Pandemic. Moving forward, we'll be keeping track of these vital issues with MultiState's State Voting and Election Laws Landing Page and Dashboard.

In our last installment, we examined: Who is eligible to vote by absentee/mailed ballots? And what are the rules surrounding absentee/mailed ballots? This week, the questions we’ll tackle while examining voting and election laws in the states are: What are the rules surrounding in-person voting? And who can vote before election day? So far, state lawmakers have introduced over 200 bills on polling places, nearly 150 bills on voter identification, and 85 bills on electioneering.

Voting in-person may have taken a step back compared to mail-in voting during the COVID-19 pandemic, but it's still the preference of many voters. The topics below cover the growing trend of voting in-person before election day as well as the hours and ID requirements for those voting at the polls on election day. 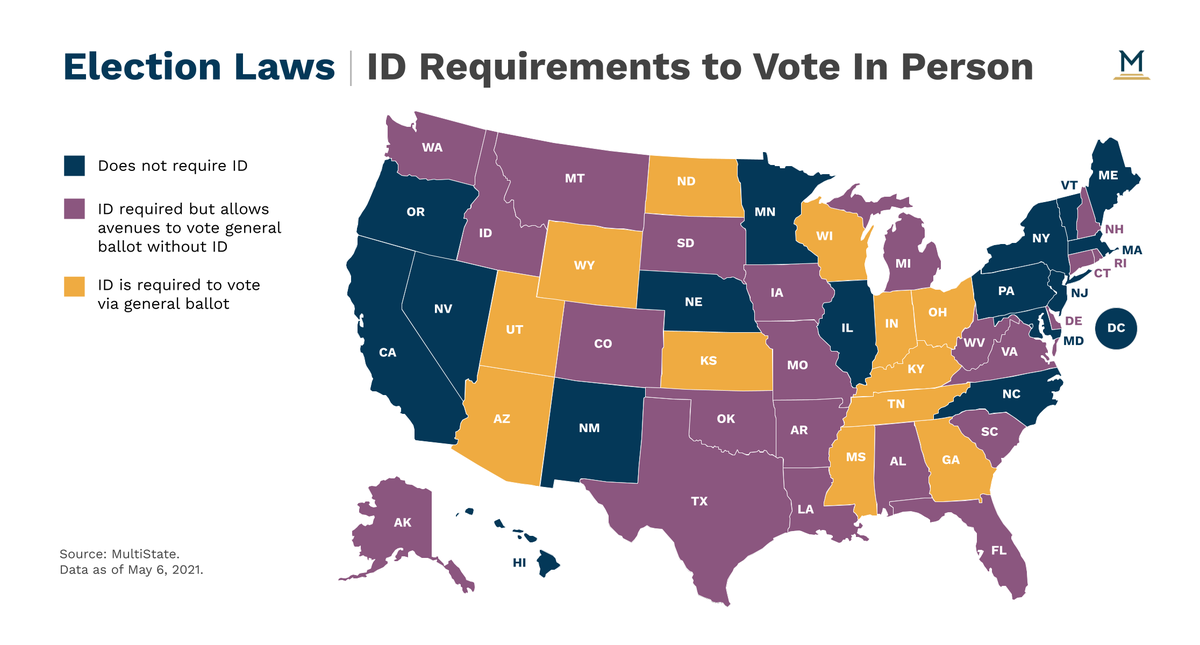 New Jersey lawmakers enacted legislation (SB 3203) this year implementing in-person early voting to all eligible voters before election day. For general elections, the early voting period will begin 10 days before the election and end on the day before the election (9 days). At a minimum, early voting locations must be open Monday through Saturday from 10:00 am to 8:00 pm and from 10:00 am to 6:00 pm on Sunday. Depending on their size, counties must designate at least three to seven polling places for early, in-person voting, though they can set up more if they choose.

This year, Iowa lawmakers enacted legislation (IA SF 413) to shorten the in-person absentee period from 29 days before the election to 20 days.

In 2019, Delaware lawmakers enacted an in-person early voting law (HB 38) that will go into effect in 2022. The early voting period begins at least 10 days before the election including the Saturday and Sunday immediately before an election.

Connecticut does not currently offer in-person voting before election day. However, the Connecticut Legislature passed a constitutional amendment in two consecutive legislative sessions (HJ 59) that now must be approved by voters in a 2022 ballot measure in order to be enacted. The measure would amend the Connecticut Constitution to allow the legislature to implement an early voting period in the state.

States generally set a minimum number of hours, and in most cases the hours themselves, that polls will be open for voting on election day. These hours vary from as low as 9 hours to as much as 15 hours. Most states open polls for 12-13 hours. This is less critical in the six states that primarily vote through the mail. 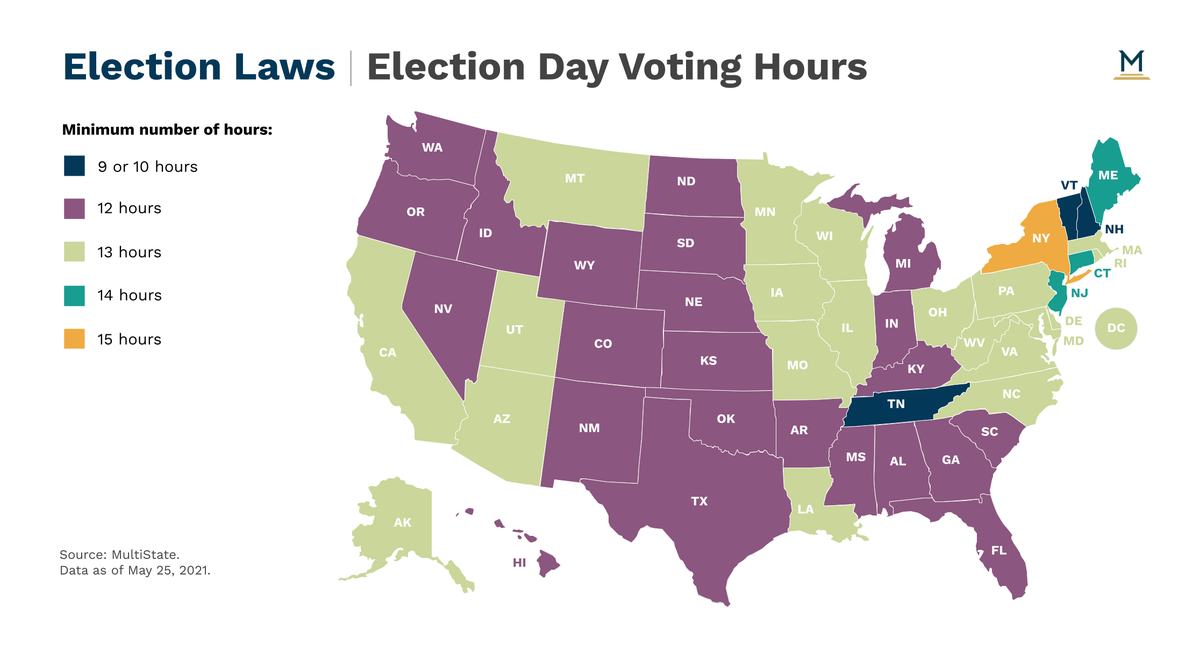 Beginning in 2005, there has been a trend over the past decade to require approved photo identification (e.g., state-issued driver's license) to cast a ballot at the polls. In 12 states, if a voter does not present an approved form of identification, they can only vote via a provisional ballot that will not be counted unless the voter takes an additional action (e.g., show up to the local election office and provide an approved form of ID). An additional 22 states require identification but provide an avenue where the voter may vote without taking an additional action (e.g., sign an attestation and the signature matches the signature for that voter on file with the election office). Sixteen states and D.C. do not require any registered voter to provide identification documents in order to vote on election day. North Carolina has enacted a law requiring voter identification, but that law is under a court's temporary injunction and currently unenforceable. 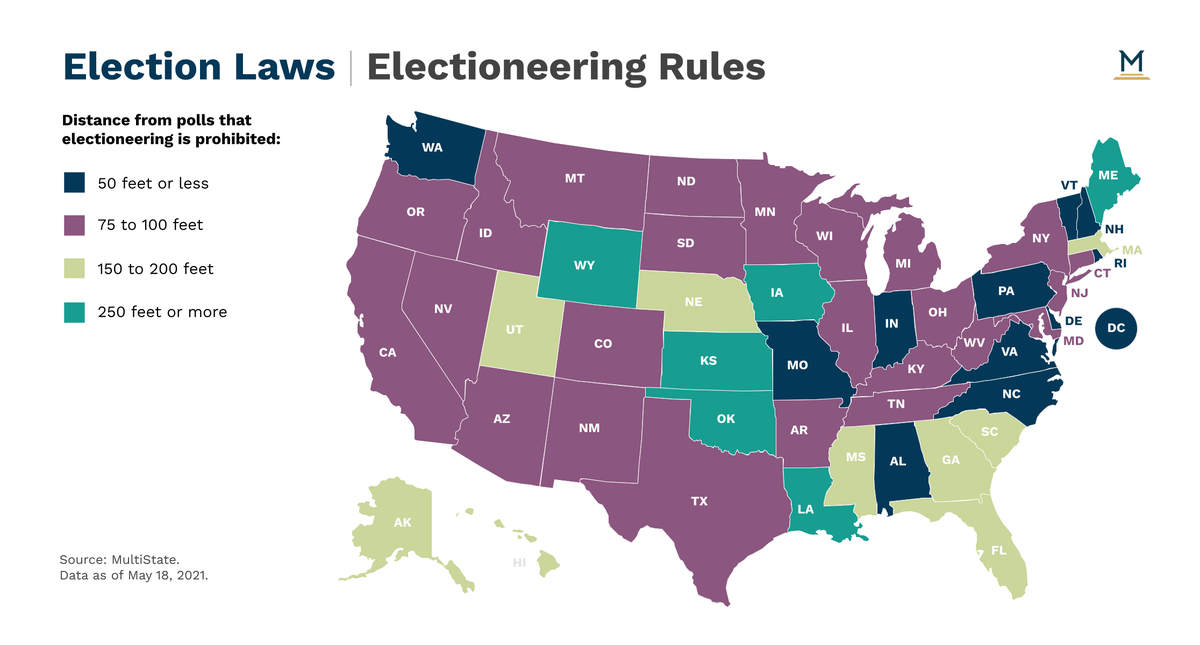 Lawmakers in Georgia, Florida, Arkansas, and Kansas made minor changes to their electioneering statutes this year.

Georgia added a provision that prohibits a third party from giving “money or gifts, including, but not limited to, food and drink,” to an elector in line to vote at a polling place. The provision includes a carve out for election workers to set up a self-serve water stand near an election line and its authors say the provision is aimed at political parties trying to influence how a voter casts their ballot.

Florida added (SB 90), a prohibition against soliciting any elector in an effort to provide assistance to vote within 150 feet of a dropbox location or polling place. Arkansas added (SB 486), a prohibition against a person, unless they’re an election worker or voter, entering or remaining in an area within 100 feet of a polling place during an election.

Kansas expanded (HB 2183) the definition of “electioneering” to include a candidate touching or handling a voter’s ballot during the voting process, unless it is on behalf of an immediate family member; distributing or counting ballots; hindering or obstructing a voter from voting, entering, or leaving a polling place; or hindering or obstructing an election board worker from performing election duties.