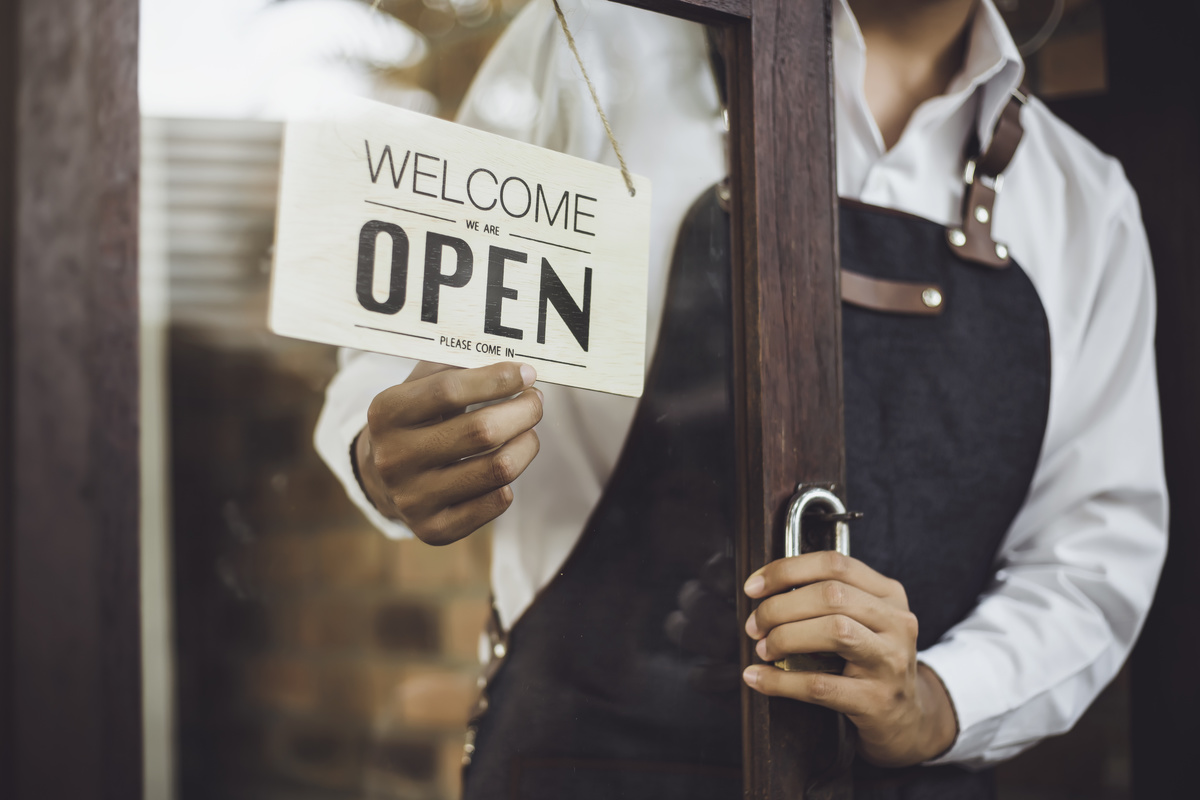 Over the past week, we’ve seen a big shift in the way states are framing their reactions to the COVID-19 pandemic: from primarily a public safety perspective to an economic recovery perspective. Governors are holding press conferences to announce regional cooperation and appointing task force members focused on “reopening” the economy after a government-mandated shutdown of many businesses across the country.

But what exactly does reopening mean, and what will it look like? As is often the case with the states, each governor will take their own approach based on their own state’s unique makeup and needs while considering what neighboring states have learned along the way.

As we explain more fully below, once a state decides its public health crisis has abated sufficiently to begin easing restrictions, the reopening process in each state will likely resemble a reversal of the initial order of shutdowns we witnessed on a rapid basis in mid-March.

As we begin to examine reopenings, it’s important to understand that each state isn't starting from the same position. These aren’t apple to apple comparisons. A handful of states haven't issued stay-at-home orders at all, while all states have mandated at least some business closings on a sliding scale of strictness. Another factor to note is that these orders all have different expiration dates and some are indefinite orders.

Further complicating matters, the pandemic has ground legislative activity to a halt, and governors have harnessed their broad public safety powers to coordinate state responses through executive orders. Unlike the legislative process, executive orders materialize as finished products (no hearings or debates to address stakeholder concerns), and as dozens of orders stack on top of each other, satisfying explanations to interpretive questions of the orders are not always readily available.

Finally, as we addressed in a previous post, confusion can arise between states and localities on what rules apply. During the pandemic, cities are often the first to act and could find themselves preempted by state action, causing further confusion for those residents trying to obey public safety directives.

Last week, a handful of states extended expiration dates for their stay-at-home orders beyond their original late April dates. This week, states that have approaching expiration dates are faced with the tough decision to extend the deadline under the current order or to allow their state’s stay-at-home order to expire and replace it with a less stringent order to begin the process of reopening.

How are states making this decision? This is a public health decision. Governors will rely on the expertise of their state health departments, the CDC, and federal agencies. The White House has advised states not to begin reopening until the state sees a downward trajectory in COVID-19 cases for a 14-day period.

There are still issues with testing availability needed to gain an accurate picture of the health situation in many states, but that analysis is beyond the scope of this post. The analysis below covers what that will look like when a state decides that it can move into a reopening stage.

How Will Reopening Actually Work?

A handful of states have appointed a task force to study what a reopening plan might look like and provide recommendations. Other governors have discussed broad outlines or timetables for reopening, but have not committed to a plan or released specific requirements for businesses to reopen. Most states are waiting for more robust data from testing before they make a decision.

But these decisions are going to happen very quickly in the coming days and weeks. Currently, about 20 of the states’ stay-at-home orders are set to expire by April 30. States will lean on each other as they explore this new territory. Governors have already announced regional coordination among states on the West Coast, Midwest, Northeastern, and, most recently, Southern regions. 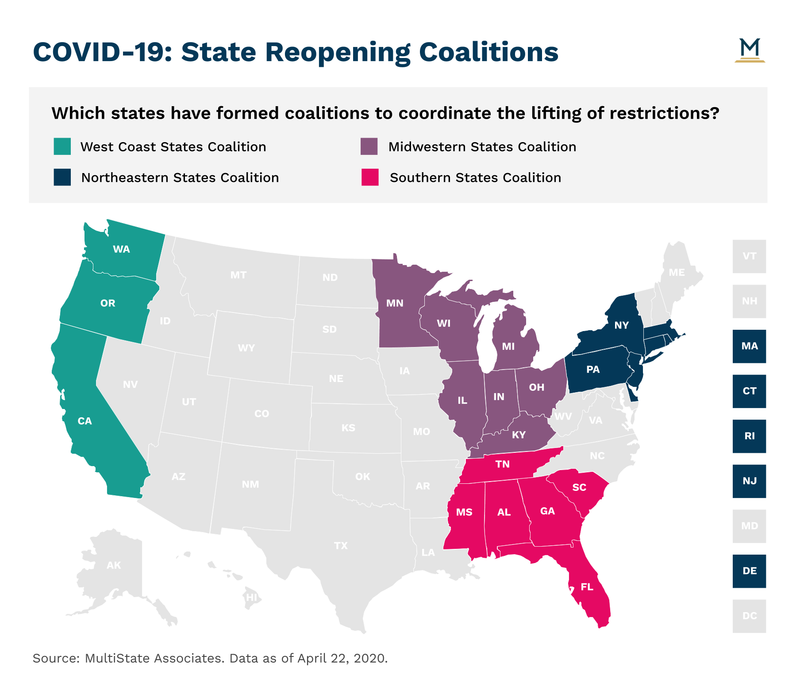 Once a state decides its public health crisis has abated sufficiently to begin easing restrictions, the reopening process in each state will likely resemble a reversal of the initial order of shutdowns we witnessed on a rapid basis in mid-March. If you remember — we understand March feels like a year ago — first we avoided large crowds at sporting events and concerts, then we avoided even smaller gatherings, then we shut down restaurants (limited to pick up only), personal services (no more gyms, nail salons, barbershops), most retail, all remaining non-essential businesses, and finally essential businesses were defined and certain safety mandates ordered (e.g., wearing masks, social distancing).

As states begin the reopening process, we’ll see a slow reversal of this shutdown combined with the implementation of the types of safety mandates we currently see in essential businesses like grocery stores today. First, those remaining non-essential businesses will begin to reopen if certain criteria are met. Next states could begin reopening retail stores to the public, personal service shops, and restaurants. Each business industry will likely require their own safety precautions. Examples include facemask requirements for employees and customers, maintaining appropriate spacing between customers at checkout lines, separating workers using plexiglass barriers, and keeping buildings at a certain level under capacity. Large crowded areas (night clubs, sports stadiums, concerts) might remain a no-go until a vaccine is developed and widely available.

For example, Colorado announced that it will allow its stay-at-home order to expire on Sunday. But Governor Jared Polis (D) outlined new rules for businesses to maintain social distancing, including that large workplaces may reopen but at only 50 percent capacity. These businesses are also advised to provide daily symptom and temperature checks for employees. In Colorado, restaurants and bars will not be permitted to reopen just yet, but retailers will be allowed to open for curbside pickup and delivery.

Similarly in Georgia, where many personal service businesses will be permitted to reopen on Friday, April 24, followed by restaurants on Monday, April 27, these businesses will be required to provide personal protective equipment to employees as appropriate to their industry, screen employees who exhibit signs of illness, including through the use of temperature checks, and implement various other health and safety measures in order to reopen.

South Carolina allowed many retail businesses in the state to reopen beginning on Tuesday, April 21. However, those businesses are restricted to 20 percent of maximum capacity (or five customers per 1,000 square feet), among other social distancing restrictions.

Texas Governor Greg Abbott (R) appointed a task force to make recommendations on reopening the state after its current stay-at-home order expires on April 30. In the meantime, in a separate executive order, Governor Abbott will allow the reopening of some retail businesses starting Friday, April 24, but restricts their operations to pickup and delivery.

Georgia and South Carolina were two of the last states to issue statewide stay-at-home orders (on April 2 and April 6 respectively). Colorado has been under a stay at home order since March 26 and Texas enacted its stay-at-home order on March 31. Notably, the reopening orders in Georgia, South Carolina, and Texas all preempt any local governments from restricting the reopenings.

If We Open, Will They Come?

After weeks of sheltering in place, and while many unknowns of COVID-19 remain, will consumers rush back into their neighborhood stores and offices once the open sign is hung back on the door? How many business owners will feel it's safe enough to expose employees to customers and vice versa? How many employees will feel that it is safe enough to return to work, especially when balanced against historically generous unemployment insurance benefits? These are big questions that policymakers won’t be able to answer on their own. Recent polling suggests Americans remain risk-averse and won’t quickly return to their normal routines. Residents must trust those decision-makers who say it’s safe to return. Trust in government officials is near historic lows. However, residents give their state governors high ratings on their handling of the pandemic so far.

And even after health officials have deemed an area safe to begin reopening, there’s still a chance that COVID-19 could flare up again. In that case, we could see states and localities moving back down a path of mandatory social distancing again, reverting to previously lifted stay-at-home orders.

We're keeping track of state and local reopening announcement with our COVID-19 Policy Tracker. Bookmark that resource for daily updates on reopenings and other government action in response to the COVID-19 pandemic.